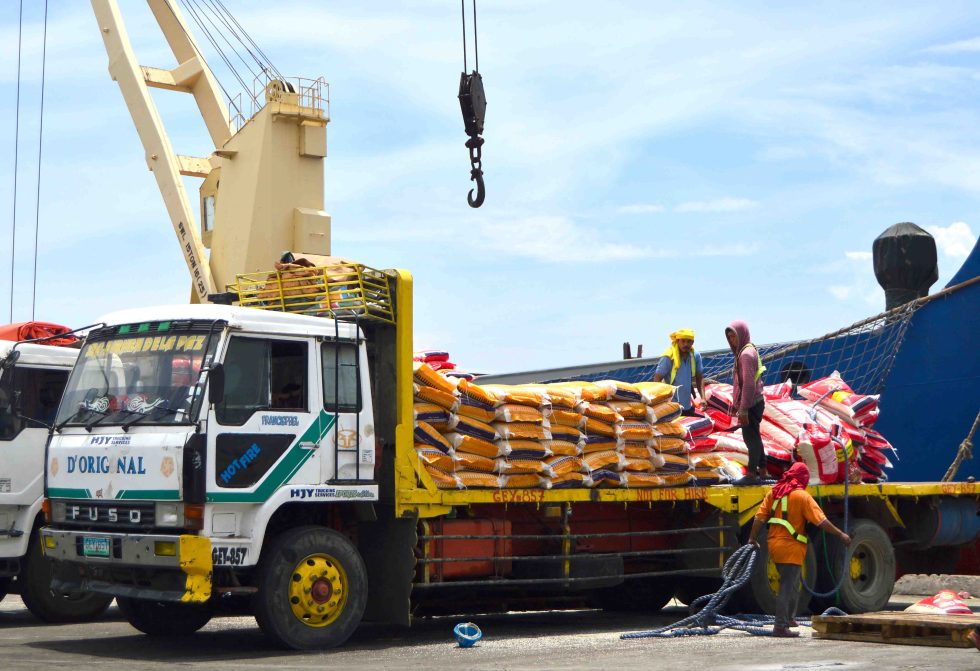 Workers unload bags of imported rice from foreign ships to waiting cargo trucks at the seaport in Barangay Macabalan, Cagayan de Oro City on Friday, May 15. The National Food Authority recently announced that the total stock of rice in its Northern Mindanao warehouses come from local farmers and not from other countries. (Jigger J. Jerusalem/davaotoday.com)

CAGAYAN DE ORO CITY, Philippines – The regional office of the National Food Authority (NFA-10) said the total rice buffer stock in its warehouses in Northern Mindanao was sourced from the local farmers in the region with 80% from Bukidnon while the rest are from other provinces.

On its Facebook page Sunday, May 17, the agency also informed the public that Lanao del Norte contributed 16% to the NFA stock while Misamis Occidental and Misamis Oriental contributed 3% and 1%, respectively.

From March 19 to May 14, NFA-10 said it has released 122,417 of 50-kilo bags of rice to local governments, public officials, and government agencies for distribution to families affected by the Coronavirus pandemic.

The rice is being sold to government entities at P1,250 per bag and are all freshly milled, it said.

Under the Rice Trade Liberalization Law or Republic Act 11203, NFA is mandated to maintain sufficient rice buffer stock to be sourced solely from local farmers and maintain its optimal level at all times strategically located across the country.

“[NFA] shall manage efficiently and effectively the acquisition, quality maintenance and disposition of the buffer stock intended only for disaster and calamity relief distribution through government relief agencies such as (DSWD), Local Government Units, Legislators, and Office of Civil Defense,” read a portion of the law.

Meanwhile, NFA-10 has listed the offices of Sen. Mary Grace Poe-Llamanzares and Sen. Cynthia Villar as among those who purchased their rice.

According to Poe’s office, they bought 10 sacks of NFA rice for the residents of Barangay Mandangoa, Misamis Oriental upon the request of a certain Anabelle Pamisa.

“Sen. Poe has purchased NFA rice from Iloilo, General Santos, Laguna, and Metro Manila, but so far there have been no complaints,” her office said, referring to allegations made by some lawmakers that the NFA rice for relief distribution had foul odor.

In a recent statement, NFA said it is open to any investigation.

Judy Carol Dansal, NFA Administrator, assured that the rice they distributed are “fresh from the rice mills which we contracted to mill our palay stocks.”

She added that local governments and DSWD prefer the NFA rice because it is cheaper and has good quality comparable to the commercial stocks sold in the market.

“Since the start of rice distribution for relief, we have not received a single report or complaints on the NFA rice quality,” she maintained.

The NFA said it has implemented good warehousekeeping practices and stringent stocks quality management, attuned to international standards on food safety, to protect and preserve the quality of the rice and palay stocks in its warehouses. (davaotoday.com)