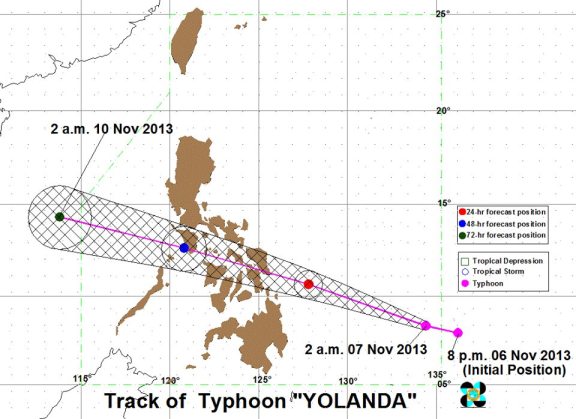 Davao City – Storm signal no. 2 was declared this morning by weather bureau PAGASA in three provinces of Caraga and in Eastern Visayas as Typhoon Yolanda entered into the Philippine Area of Responsibility Wednesday evening.

PAGASA announced on Thursday 5 am that the eye of Typhoon Yolanda (international name Haiyan) is spotted as of 4 am today at 822 kilometer east of Hinatuan, Surigao del Sur. (8.4°N, 133.8°E).

The bureau said winds of 60 to 100 kph are expected in at least 24 hours in these areas,

Forecast from Project Noah of the Department of Science and Technology (DOST) said 539 municipalities all over the country will be hit by rainfall of about 60 to 100 mm in a three hour rainfall.

They also advised the public and the disaster risk reduction and management council to monitor developments and take appropriate actions for the safety.

In Davao region, the provincial government of Davao del Norte suspended all classes in all levels today until Friday.  The Mayor of Tagum City likewise declared suspension of classes.

Romulo Tagalo, director of the Provincial Disaster Risk and Reduction Management Council (PDRRMC) said “they are not taking (Yolanda) for granted.” (davaotoday.com)