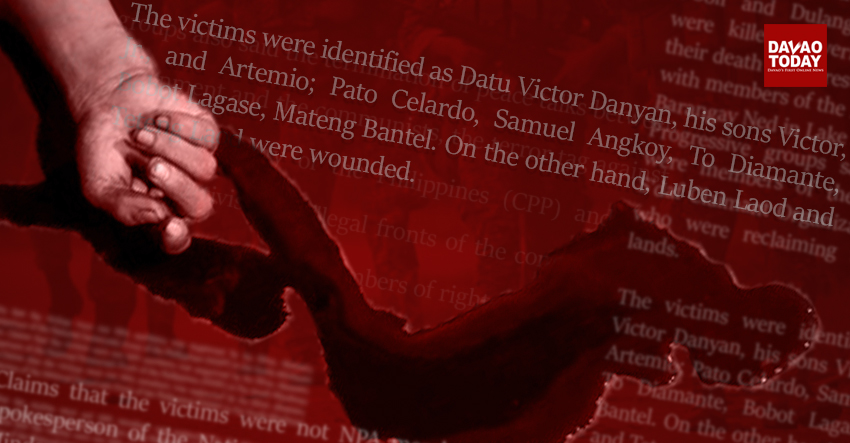 DAVAO CITY, Philippines – In a span of two days, two church leaders and eight Lumad farmers were killed in the country, prompting lawmakers and human rights organizations to call on the government to end Martial Law in Mindanao.

On December 4, Father Marcelito Paez of the Diocese of San Jose town in Nueva Ecija was gunned down by armed men in San Leonardo. Paez was a member of the Promotion of Church People’s Response (PCPR) and the coordinator for Central Luzon of the Rural Missionaries of the Philippines.

A day before his death, December 5, another church leader was killed in Mindoro.

Killed was Pastor Lovelito Quiñones of the Kings of Glory Ministry. He was shot by suspected military agents in Mansalay town in Oriental Mindoro, according to PCPR in a statement.

Quiñones was tagged as a member of the New People’s Army (NPA) by the military which his congregation and his family denied.

On the same day of the killing of Quiñones, eight tribal farmers of the T’boli and Dulangan Manobo tribes were killed. Government forces said their death was a result of an encounter with members of the NPA at Sitio Datal, Barangay Ned in Lake Sebu.

Progressive groups said the farmers were members of the T’boli-Manobo S’daf Claimant Organization (Tamasco) who were reclaiming their ancestral lands.

The victims were identified as Datu Victor Danyan, his sons Victor, Jr., and Artemio; Pato Celardo, Samuel Angkoy, To Diamante, Bobot Lagase, Mateng Bantel. On the other hand, Luben Laod and Teteng Laod were wounded.

“The farmers were part of the 140 T’boli-Manobo peasant families who have collectively occupied and tilled their ancestral land that were landgrabbed by the Consunji family,” said Antonio Flores of the Kilusang Magbubukid ng Pilipinas (KMP)

Claims that the victims were not NPA members was supported by Ka Efren Aksasato, spokesperson of the National Democratic Front of the Philippines (NDFP) in Far South Mindanao Region.

The casualties, Aksasato said were “civilian residents and not NPA members.”

With regard to the death of Danyan, Aksasato said the military “approached” his house and “opened fire.”

“This prompted the residents, armed with 12-gauge shotguns and indigenous weapons to fight back,” Aksasato said in a December 6 statement.

Human rights advocates expressed alarm on these cases. They said these incidents are escalating cases of human rights abuses under martial law.

“In Southern Mindanao alone, from 31 victims of political killings before martial law, there are now 56 victims of extra judicial killings, mostly peasants and Lumad,” Amper said.

The latest casualty, according to human rights organizations, was Rodrigo Timoteo, a member of the Compostela Farmers Association in Compostela Valley Province.

The groups also said the termination of peace talks between the government and the communists, the terror tag against the Communist Party of the Philippines (CPP) and the labeling that activists are “legal fronts of the communists” contribute to the increasing numbers of rights abuses.

President Rodrigo Duterte on November 23 terminated the talks with the communists by signing Presidential Proclamation No. 360.

On Tuesday, December 5, Duterte also signed Proclamation No. 374, declaring the CPP and NPA as terrorists organizations.

The KMP said declaring the CPP-NPA as “terrorists” will “harm more civilians.”

“The military won’t distinguish between civilians and combatants, between legal and progressive activists, and armed warriors,” said Flores. (davaotoday.com)