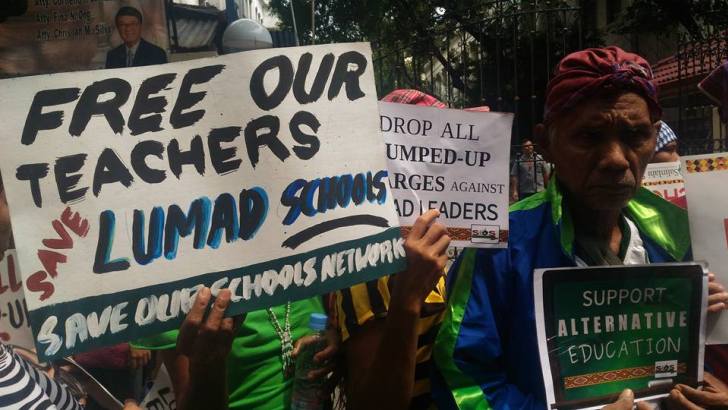 Photo courtesy of ural Missionaries of the Philippines-Northern Mindanao

DAVAO CITY, Philippines — Four volunteer teachers of Rural Missionaries of the Philippines-Northern Mindanao Sub-Region who went missing earlier this week were found to be under the custody of a military unit in Iligan City.

Melissa Comiso, literacy and numeracy program coordinator of the Rural Missionaries of the Philippines-Northern Mindanao Sub-Region, said they discovered the four volunteer teachers were being held in a military camp since they went missing last November 12.

A soldier named Cpl Rico Ordaneza of the Army’s 103rd Infantry Battalion confirmed to Comiso on Nov. 27, that they took custody of the volunteer teachers and they are being investigated.

On Nov, 12, Tema Namatidong, 28; Julius Torregosa,30; Ariel Barluado, 22; and Giovanni Solomon, 30—all literacy-numeracy volunteer teachers, were forcibly taken by a composite team of soldiers belonging to the Army’s 51st and 81st Infantry Battalion.

“We received a text from one of the teachers, alerting us of the soldiers’ presence in the school premises,” Comiso said, adding that the teachers were conducting classes on agriculture and community beautification when the soldiers arrived at the school’s vicinity.

Comiso said the soldiers, onboard four 6X6 vehicles conducted a roving patrol last Nov. 12 in Sitios Babalayan, Durongan village, Tagoloan 2 in Lanao del Sur. “They are looking for Sultan Jamla and Datu Langi as both persons are known community leaders,” she said.

Comiso and her company earlier visited the 51st Infantry Battalion in Camp Suarez in Iligan City on Nov. 27 but a military officer told them to “search elsewhere because the area where the teachers were reported to have been arrested is not in the jurisdiction of the military unit.”

Earlier, RMP-NMR received a notice from Datu Langi that the four volunteer teachers were allegedly arrested by soldiers and were brought to Marawi City with Sultan Jamla last Nov. 23. However, this report has not been confirmed by the group up to this date .

Through the help of the Archdiocese of Iligan City’s Social Action Center, Comiso’s group was able to contact Cpl. Rico Ordeza who they met in the Lanao del Sur Capitol.

Efforts to see and talk to the volunteer teachers under the military’s custody remained futile after Ordaneza barred them to , saying that all four “ are being investigated because they were with Sultan Jamla who has a warrant of arrest for different cases.”

Comiso said the army unit is holding the volunteer teachers for more than 15 days already, “more than the prescribed number of days allowed by law that police/military personnel can detain suspected persons or persons of interests without cases filed before them.”

“In the absence of cases filed before the teachers, the 103rd Brigade are holding the teachers illegally,” she added. (davaotoday.com)