A mass for martyrs, a poem for fallen Italian priest 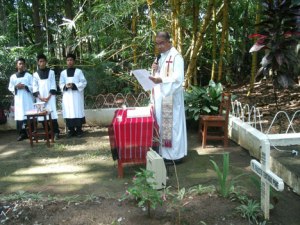 A POEM FOR FATHER POPS. Father Pol Paracha reads the poem entitled "My Soul's Diary" at the mass in Balindog village, Kidapawan City. The Diocese of Kidapawan honored their martyrs as they remember the slain Italian missionary Father Fausto Tentorio. (davaotoday.com photo)

Around 50 friends and supporters gathered at the gravesite of slain Italian missionary Father Fausto ‘Pops’ Tentorio as the Diocese of Kidapawan also held a mass to remember Father Tulio Favali, an Italian missionary gunned down by paramilitary elements of the martial law regime in 1985 in Tulunan, another town of this province.

KIDAPAWAN CITY, North Cotabato, Philippines — Two Italian missionaries, a lawyer-advocate, two church workers and an activist couple were hailed as this province’s martyrs by the local diocese in a mass which also marked the 6th month death anniversary of the city’s latest human rights victim.

Around 50 friends and supporters gathered Tuesday at the gravesite of slain Italian missionary Father Fausto ‘Pops’ Tentorio, PIME (Pontifical Institute for Foreign Missions) as the Diocese of Kidapawan also held a mass to remember Father Tulio Favali, an Italian missionary gunned down by paramilitary elements of the martial law regime in 1985 in Tulunan, another town of this province.

Other martyrs during the Marcos government cited were Sofronio Roxas, a lay leader from Matalam town; and Rading Fajurano, church worker in Tulunan town.  Included in the list were human rights lawyer Connie Brizuela, who was among the victims of the Maguindanao massacre in 2009, and NGO activists and journalists George and Maricel Vigo killed last 2006.

The participants noted that aside from the case of Favali whose perpetrators were incarcerated and the Maguindanao massacre’s prime suspects who are currently under trial, justice remains elusive to the members of the Diocese of Kidapawan who are victims of extrajudicial killings.

Father Peter Geremia, PIME, said leading suspects in the Tentorio’s murder have been identified but are yet to be appropriately charged.  “There is also the issue of other personalities involved in the brutal murder of the priest and the safety of the witnesses,” he told a crowd of Tentorio’s supporters.

A close friend of Tentorio, Geremia said witnesses have a hard time to stay together with their families and seeing the need to transfer frequently from one safe haven to another.  He expressed his gratitude though to the supporters and urged them to sustain their cooperation until justice is served for Tentorio.

Meanwhile, in his homily, Father Pol Paracha of Sta. Catalina Parish in President Roxas town, North Cotabato, reflected on the importance of Tentorio’s cause while serving the poor and the disadvantaged sectors of the society especially in the hinterlands of Arakan.

Like the other martyrs of the Diocese of Kidapawan, “Fr. Pops obtained the extraordinary gift of martyrdom,” he said.  “The cause that Fr. Pop’s lived must serve as inspiration and source of courage and strength in continuing the pursuit for genuine peace based on justice,” he added.

Entitled “My Soul’s Diary,” the poem describes the slain priest’s final hours on that fateful October 17 morning in Arakan town.

The following is the poem’s complete text:+

It was Monday, 17th of October
I woke up early and said my prayer
The breeze was cold the air so fresh
Birds sang their hymns and hopped on the trees

I walked downstairs and strolled outside
The mountains stood high, the land was wide
They rays of the sun glittered from beyond
Proclaiming the wisdom of the Creative Hand

Someone was watching my every stride
He stared at me I didn’t mind
He seemed suspicious so I just thought
Or did I judge the way he looked?

I took my keys from my pocket
And walked towards my parked jeep
I turned the knob and opened the door
Did I hear footsteps? I was not sure

A shot was fired and then another one
It wasn’t deafening, just a muffled bang
Something hit me I didn’t understand
I was slumping, am losing my balance

I kissed the ground and laid down there
I saw nothing but darkness everywhere
Am I dying? I asked myself
No! No! No! I am just asleep

I heard them cry calling my name
I ran to their side, is it me you’re looking?
Nobody took notice as I stood there
They wailed so loud and trembled with fear

I looked at the clouds and asked the heavens
Am I the dead or just my friend?
I heard no voice there was no answer
A butterfly fluttered by, was it an angel?

I saw a door shining so bright
Peace engulfed me I felt so light
Am I in heaven or just day dreaming?
I’d better wake up and live again

They laid my friend in a white coffin
Clothed in his cassock he looked serene
I gazed on his face and into his mind
Alas! I knew his heart and soul are mine

So now I’m dead is it the end?
My life they took what have they gained?
The killer walked free and collected his bounty
Boasting about killing a priest is easy