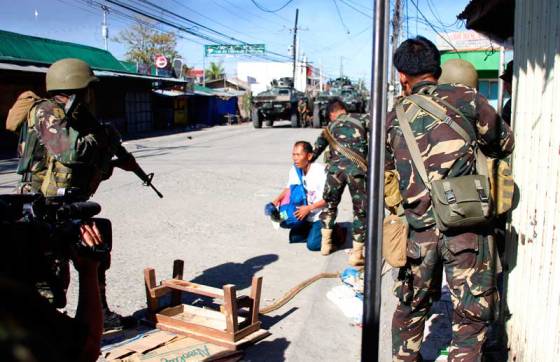 A government soldier takes ready aim at a Zamboanga civilian while his comrade holds the latter down. The person came out of Lustre Street where government troops were pursuing off MNLF rebels. (davaotoday.com photo by John Rizle L. Saligumba)

Davao City– An international human rights group warned that the escalation of the conflict in Zamboanga city has resulted to neglect on the laws of war sparing civilians from attacks.

In a statement, the Human Rights Watch (HRW) said it was alarmed on reports that civilians were harassed, arrested and left in the crossfire between government security forces and the Moro National Liberation Front (MNLF).

As fighting continued on its second week, the military launched airstrikes through helicopter gunships for the first time Monday as they said they are now closing in on the Moro rebel forces holding siege in the city. Three MG-520 helicopters fired artillery in downtown areas in Lustre street, Barangay Catalina.

The HRW said local monitors in Basilan, where fighting believed to have spread, reported that the Philippine Army fired 105mm artillery that could strike populated areas.

With this, the HRW warned that “(H)eavy artillery that has a large blast effect should not be used against enemy forces near civilian areas because of its indiscriminate effect.”

The group said “(U)nder the laws of war, all sides are prohibited from deliberately attacking civilians, conducting attacks that do not discriminate between civilians and combatants, or could be expected to cause disproportionate civilian harm.”

The United Nations (UN) Office for the Coordination of Humanitarian Affairs reported about 249,000 people have been affected with the MNLF siege since September 9, while 72,000 people were displaced in Zamboanga City and 13,500 people were dislocated in Basilan.

The HRW cited that around 300 people in Barangay Rio Hondo remained  “trapped in an ice plant building, having abandoned their homes for the safety of the concrete structure.”

The group further said the residents opted to stay to “safeguard their homes and belongings” and also because they had no means to pay outrigger boats to flee from the coast.

“Several residents who escaped the villages told Human Rights Watch that many civilians left in the villages could not leave for fear of getting caught in the crossfire or are being prevented from leaving by Philippine security forces because they lack identification documents and thus are suspected of being rebels,” the statement reads.

Brad Adams, Asia director of HRW reacted over this report. “Government forces should not be making blanket assumptions about whether individuals are rebels based on whether they have proper documents or not. Officials can check those leaving the conflict zone, but they need to ensure that civilians have safe passage and are not put at unnecessary risk.”

The HRW also scored the state troops for turning the city’s largest hospital, the Zamboanga City Medical Center into “a veritable garrison” after hospital staff evacuated all patients on the first day of the tension.

“(T)he military promptly moved its forces into the hospital, parking their trucks inside the hospital compound and even sending snipers to two spots on the rooftop to fire on rebels a few hundred meters way,” the group said.  (davaotoday.com)