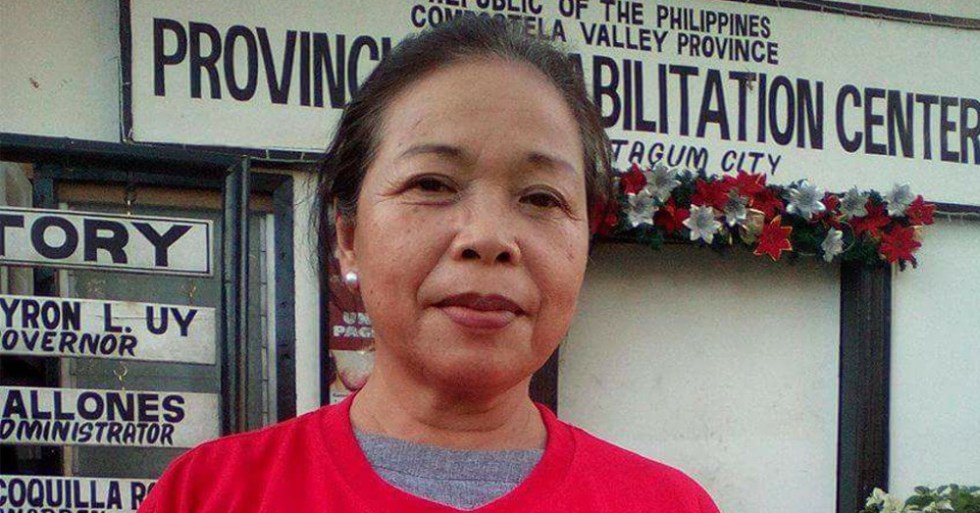 Lumad school teacher Amelia Pond has long maintained her innocence, and said that the arrest was a case of mistaken identity. (Photo courtesy of Save Our Schools Network)

DAVAO CITY, Philippines – A regional court in Nabunturan, Compostela Valley, has junked cases against a teacher who was previously suspected as a member of the New People’s Army (NPA).

The order was dated December 4, and was signed by Cruz who was presiding judge of the cases.

Pond was arrested in August 2016 in Cebu City over the said cases. At the time, she was also suspected as being a member of the NPA using an alias Adelfa Toledo, according to the Criminal Investigation and Detection Group Region 7.

Complainants claimed she had involvement for the killings of Barangay Ngan councilors Florencio Guay and Florencio Capangpangan in August 2000. Two of the complainants, Thelma Capangpangan and Myrna Guay, were spouses of the victims.

But Cruz, in the order, said the complainants were “no longer interested” in pursuing the case against Pond.

Pond has long maintained her innocence, and said that the arrest was a case of mistaken identity.

The teacher’s colleagues were elated of the court’s decision.

“It only shows that she is innocent,” said Ricky Balilid, vice chairperson of the Association of Community Educators.

He added: “It only means that helping Lumad with their education should not be a crime.”

The decision came after Pond was placed in detention for almost 16 months, said Balilid.

During her arrest, Pond attended the national assembly of the Rural Missionaries of the Philippines (RMP) where she worked as southern Mindanao region coordinator.

Pond was placed in hospital arrest in December last year after she underwent a spine surgery.

Despite this development, Save Our Schools Network in Southern Mindanao Region, continues to worry about the continuing attacks on schools and teachers of Lumad.

“Lumad schools are vilified through red baiting while teachers and students are harassed and attacked,” the group said.

They also fear that the plan to extend martial law in Mindanao for another year will only escalate violence against the schools which are allegedly put up by the NPA. (davaotoday.com)