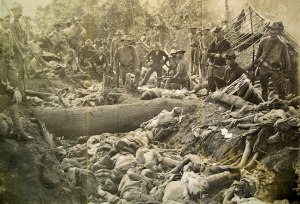 DAVAO CITY – The deaths of hundreds of Moro warriors and civilians in Bud Dajo, Sulu 109 years ago was largely because of hunger as Americans mounted their attacks and prevented food rations from coming in, a descendant of a survivor said.

“The 600 warriors who fought to defend Sulu, including the civilians who sought shelter, died because they were too weak to fight as Americans pressed their attacks that outlasted the rations of the defenders,” said Ronnie Imao Adel, 62, descendant of a survivor of the Attack.

Adel said his grandfather, Karim Imao, told this tale to him and his siblings while he was 10 years old and Imao was about 55 years old.

“Bud Dajo is a steep place that is why the residents chose it for refuge but the American cavalry caught up and the rest of their forces surrounded it with their garrisons,” Adel said.

The warriors hid for a week in a cave in Bud Dajo yet unknown to the Americans “but as they [Americans] were able to eventually ascend, they were able to find out.”

“My grandfather only survived because he ate his shirt (clothes) and when the Americans were clearing the area he was caught below dead bodies,” he said.

Adel said that his grandfather told them he descended the steep slopes by using a “bagon” or a vine.

Adel’s grandfather said that there were about 600 warriors and many more civilians who were killed by the Americans.

According to various sources, the number could be between 800 to 1600 killed.

“They only have spears, kris (jagged double-edged short sword or dagger) and barong (heavy-bladed, leaf-shaped short sword) while the Americans have guns and cannons,” he said.

Adel said his grandfather was not able to tell them what age he was during the massacre but he said “all members of the community defended Sulu with their lives.”

“It is part of our culture to not accept defeat, not while we can still fight,” he said.

Adel said that the Tausug, one of the 13 ethnolinguistic tribes of the Moro people of the Philippines, “do not want to follow foreign rule such as the imposition of taxes and even shunned english education the Americans imposed.”

However, he said that “education is part of understanding the world so you will not be tricked by your enemies.”

Bai Ali Indayla, spokesperson of Moro human rights group Kawagib, said the “valiant resistance of the Moro people in Bud Dajo was the start of the American troops’ use of labels against them”.

“The Americans began to use the term juramentado and called the Moro people uncivilized,” said Indayla.

Indaylsa said Bud Dajo massacre was the start of a series of massacres of the Americans against the Moro people until the present.

“Now the US use a different label of terrorist against the Moro people and Muslim and Islam globally,” she said.