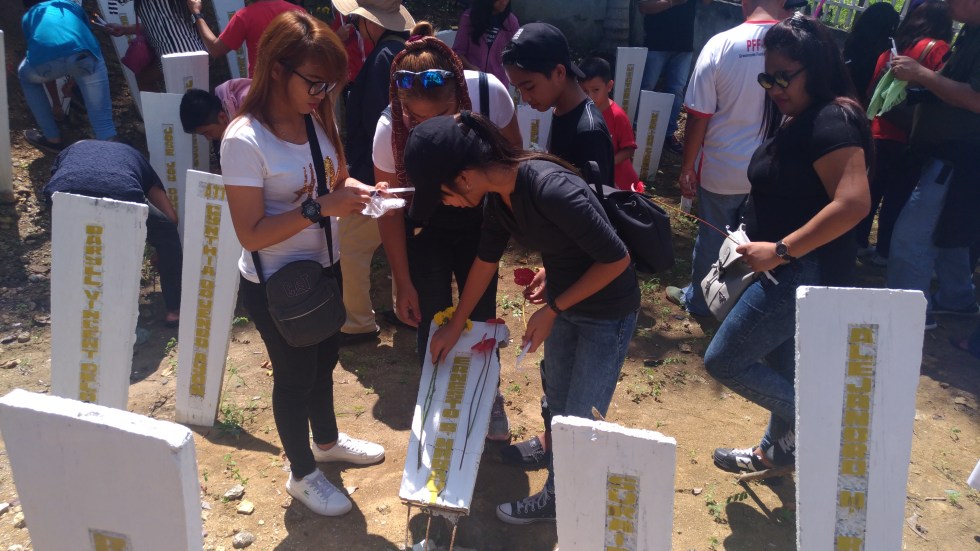 EIGHT YEARS. Families and friends of the journalists killed in Ampatuan town in Maguindanao visit the graves of the victims after a mass held at the memorial marker at Sitio Masalay, Barangay Salman on November 19, 2017. (Mara S. Genotiva / davaotoday.com)

GENERAL SANTOS CITY, Philippines — After eight years, the families of the slain victims of the infamous Ampatuan massacre would be able to see a flicker of hope as a resolution of the case is at hand, a lone private prosecutor said on Friday.

“After the presentation of evidence of the last five or 10 accused then wrap up na. The judge can resolve the case for all accused,” she said.

To speed up the issuance of the resolution of the cases, Santos said they ensure that witnesses are presented before the court every week.

Since the case was filed in 2009, Santos said there were 115 arrested out of the 196 accused. Out of the 115, three became state witnesses, while four died during the case proceedings, including the Ampatuan patriarch, Datu Andal Ampatuan Sr.

Currently, there are 102 suspects who are still in jail, 70 of them were already granted with bail but remain in prison “due to lack of money,” Santos said. Meanwhile, 42 accused were denied to post bail.

Despite the good news, Santos said the release of Datu Sajid Ampatuan, son of the former Maguindanao governor Datu Andal Ampatuan Sr., after his bail was granted in March 2015 proves there are still challenges ahead.

The Court of Appeals affirmed its decision this year in granting bail to the younger Ampatuan while dozens of suspects remain at large.

The incident was known as the single deadliest attack on media practitioners.

She stressed, however, that the families of the victims should not stop in pushing for the case resolution because even if the criminal aspect of the case is resolved, there is still the civil aspect.

The lack of lawyers to defend the families of the victims remains a challenge.

Santos said she is the only remaining prosecutor who is the most accessible to the victims. She said she is handling at least 30 cases.

Another four families sought for her assistance during the meeting here on Friday, November 17.

Atty. Jo Clemente, the acting vice chairperson of the National Union of Journalists of the Philippines, said they remain positive on the issuance of the case’s resolution.

Despite this, Clemente said the resolution of the Ampatuan massacre will not only give justice to the families of the 58 people killed in Maguindanao, but will also make an impact to break the culture of impunity in the Philippines.

“It will provide a landmark decision that would really say that justice prevails in this country,” she said.