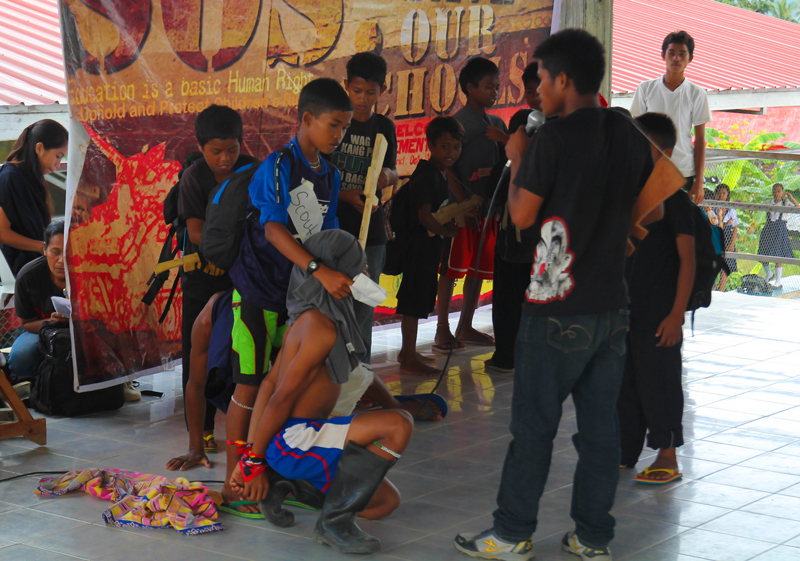 REENACTING THE HORROR. Children of Barangay Mangayon, town of Compostela, Compostela Valley dramatize how they were harassed and forced by government soldiers to act as guides in their counter-insurgency operations . This was part of the Save Our Schools: Children’s Camp launched by child advocates in Panansalan, Compostela last October 29 to call for the protection of children’s rights in the observance of Children’s Month. (file photo)

DAVAO CITY – A children’s advocacy group said classes were disrupted as school children were “too afraid to go to school” after military troops “encamped” in their classrooms in a farflung village in Compostela, Compostela Valley province.

Students, parents, teachers and staff of a branch of Salugpungan Ta ‘Tanu Igkanugon Community Learning Center (STTICLCI) that is located in Sitio Side 4, Barangay Mangayon, Compostela were surprised when 36 soldiers of the Army’s 25th Infantry Battalion came to their school 8am last Saturday and “threatened teachers while calling their school an NPA (New People’s Army) school.”

Children’s Rehabilitation Center (CRC) Advocacy Officer Rius Valle said the STTICLCI operates Lumad schools and is supported by nuns of the Rural Missionaries of the Philippines.

“The children are very frightened and are too scared to even participate in psychosocial release activities,” said Valle.

CRC and other organizations conducted a “quick response” investigation to the area Tuesday.

“We have photos and videos of soldiers still occupying the school buildings,” said Valle.

Valle said that 4pm of Tuesday, residents accompanied by support groups approached the Army personnel to talk to their commanding officer but they denied that he was present in the area.

“Later a certain Michael Sayson dressed in civilian clothing, approached and told us that they (Army) are going to leave the area before night fall,” said Valle.

Valle said the soldiers “conveniently hung their hammocks under the classrooms and in an unfinished building inside the school grounds.”

The school’s Basic Education Head Ronnie Garcia said the military’s “branding” of the school as an “NPA school” is “tantamount to undermining the efforts of the local lumad organizations and support groups who made the building of schools possible.”

“It is also an insult to Department of Education which granted school’s license to operate,” added Garcia.

Valle of CRC said the soldiers’ encampment inside school premises is a violation of many international instruments which the Philippines is a signatory, the Constitution and specific laws like Republic Act 9610 or the “Special Protection of Children Against Abuse, Exploitation and Discrimination Law.”

For his part, Garcia said the soldiers must be “pulled-out immediately from the community and not just the school.”

“The students are from the communities, thus, whatever happens to this community will affect them. They should be pulled-out so we can resume our classes,” he said.

Garcia lamented the “militarization” of their school, saying that that the school recognizes the culture of the Lumad, their life and their rights.

“For a very long time, the Lumad children were deprived of their right to education. The Lumads themselves built the school, out of their own effort and resources with the help of well-meaning organizations,” said Garcia.

Garcia said that the literacy in the community “has been increasing.”

“They have learned to read and write. This is essential in order for them to help in developing their communities,” said Garcia.

The Side 4 school offers pre-school education as well as grades 1 to 5 and currently has 130 students. It was damaged by Typhoon Pablo but was rebuilt with the help of the Redemptorist Brothers, Balsa Mindanao and Ateneo de Davao University.

Meanwhile, Karapatan condemned the continued use of schools as military camps as justified in the guidelines recently released by the Department of Education and the Armed Forces of the Philippines (AFP) on the military activities in schools.

From July 2010 to December 2013, Karapatan has documented 18 minors who were victims of extrajudicial killing and 132,633 victims of right violations with the use of schools, medical, religious and other public places for military purposes.

In a statement, Karapatan secretary general Tinay Palabay said “We have repeatedly demanded for the immediate pull out of all military personnel from communities and schools.”

The Aquino administration came out with AFP guidelines/letter directive #25 and DepEd memorandum 221 series of 2013 which, Karapatan said, “legitimizes attacks against children by continuing to allowthe use of schools/educational institutions for military purposes, sugarcoating such operations as “civil-military operations.”

Karapatan said they strongly opposed the AFP and DepEd guidelinesfor violating domestic and international laws relating to the rights of the child, specifically Republic Act No. 7610 also known as the Special Protection of Children Against Child Abuse, Exploitation and Discrimination Act and the United Nations Convention on the Rights of the Child.

“The memorandum is being clearly used by the AFP to enter schools for military purposes, specifically to conduct lectures on the government’s counter-insurgency program in violation of Section 22 of Republic Act 7610 that declares Children as Zones of Peace and prohibits the use of public structures such as schools, hospitals and rural health units for military purposessuch as command posts, barracks, detachments and supply depots,”Karapatan said.

Last year October, about 300 residents from the same area in Compostela evacuated after soldiers refused to leave their community and committed various human rights violations like arresting and beating three children. The children were accused of carrying rice that was intended for NPA members and not for school workers.

Residents believed that the recent intensified military operations will pave the way for mining activities of the Agusan Petroleum Corporation (Agpet).