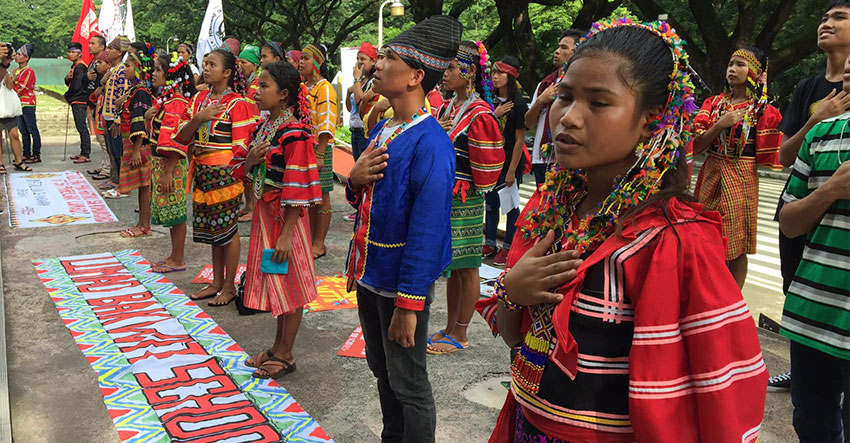 Lumad students, along with volunteer teachers and Lumad elders on Monday, September 2, launch this year’s Bakwit School in UP Diliman. (Photo from Save Our Schools Network’s Facebook page)

DAVAO CITY, Philippines — They don’t need to wait for a permit to continue teaching the Lumad students.

This is what the Lumad Bakwit School, which began Monday in UP Diliman, is telling the Department of Education, which has yet to respond to the appeal of the Salugpongan schools that was submitted over a month ago.

Some 50 Lumad students, accompanied by volunteer teachers and Lumad elders as guardians, are welcomed by the UP Diliman community which hosts their Bakwit School for another school year.

UP has been supporting Lumad schools by providing spaces in their campuses where Lumad students and teachers could hold their formal classes in the past two years. Other universities in Manila, such as University of Santo Tomas and De La Salle University, has followed suit.

In Davao City, the UCCP Haran continues to host 155 Lumad students for the past five years.

Salugpongan school officials said their decision to continue with the schooling came after seeing no result from the DepEd to decide on their suspension.

The suspension order on 55 Salugpongan campuses in Davao Region came out last July based on allegations that the school was “recruitment ground” for the New People’s Army.

“We have already categorically denied the charges that our schools do not teach in accordance with the guidelines set forth by the DepEd, that we are using children to join rallies, and that we teach the pupils with ideologies that advocate against the government,” Meggie Nolasco, executive director of Salugpongan Ta ‘Tanu Igkanogon Community Learning Center, Inc. (STTICLCI) said. “These statements are malicious and have no factual basis.”

Nolasco said they are surprised that a dialogue was held by DepEd Region XI last Tuesday, August 27. But at the same time, one of its official sat on the Senate hearing in Manila regarding the case, and affirmed the allegations.

Nolasco said this is a lack of due process that continues the attack on school personnel and students of Salugpongan.

“Their negligence in following due process caused intense harassment and intimidation to the teachers and students. DepEd became the mouthpiece of the Armed Forces of the Philippines instead of adhering to its mission in providing education,” she added.

“DepEd is not interested in promoting the right to education of the Lumad and is actively playing a part in a malevolent scheme to evict us from our communities, that much is clear,” Nolasco said.

The Save Our Schools Network also criticized DepEd for failing to protect the Lumad children’s right to education and protection from military attacks.

The group bared that there are about 671 cases of attacks on schools; 584 of which were documented after Mindanao was placed under Martial Law in 2017.

SOS spokesperson Rius Valle believed that the suspension of Salugpongan schools is due to economic interests which the government is supporting.

“The closure of the Salugpongan schools and the non-issuance of the permit to operate of other Lumad schools are likely related to 3 new mining explorations being proposed in Talaingod, Davao del Norte,” said Valle referring to the exploration proposals from different mining companies including the Metalores Inc., One Compostela Valley Minerals, and Philippine Meng Di Mining and Development Corporations.

Valle calls on the public to throw their support to help the schooling of the Lumad children.

“Against all odds, threats, and harassment, we will continue to stand firm with our commitment to uphold and protect the Lumad’s right to education,” said Valle. (davaotoday.com)