KORONADAL CITY, Philippines – “What I saw, heard, and experienced during the fact-finding mission was very lurid. There is no report coming from the media. There’s a need to expose all these atrocities,” said Julie Jamora, a Filipino-American women rights advocate, who joined a fact-finding team that visited Mindanao to verify reports of human rights violations being committed with the declaration of martial law.

Jamora, who also experienced harassment after policemen took her mobile phone in a checkpoint in Koronadal City on the way to the area, realized the need “to further expose the rights abuses in Mindanao.”

The fact-finding mission composed of 50 individuals went to Sitio Datalbonglangon, Barangay Ned, Lake Sebu town in South Cotabato on February 20 to investigate the reported massacre of eight T’boli-Dulangan Manobo after members of the military allegedly opened fire at their community on December 23, last year.

The group is composed of Filipino-American delegates who are members of the Gabriela New York, students from Mindanao State University-Gensan campus, Anakpawis Representative Ariel Casilao, members of the media, and locals who served as guides for the team.

The said mission is part of the International Solidarity Mission spearheaded by the Mindanao for Civil Liberties, a broad formation of church-based and cause-oriented organizations, where international and local delegates would conduct simultaneous visits to some Martial Law affected areas in Surigao del Sur, Lanao del Sur, Davao City, Ozamis City and South Cotabato from February 18-21.

The group traveled around three hours by truck and two hours of trekking the mountains of Lake Sebu to reach the community located in the tri-boundary of three provinces: Lake Sebu, South Cotabato, Bagumbayan town in Sultan Kudarat and Maasim in Sarangani. 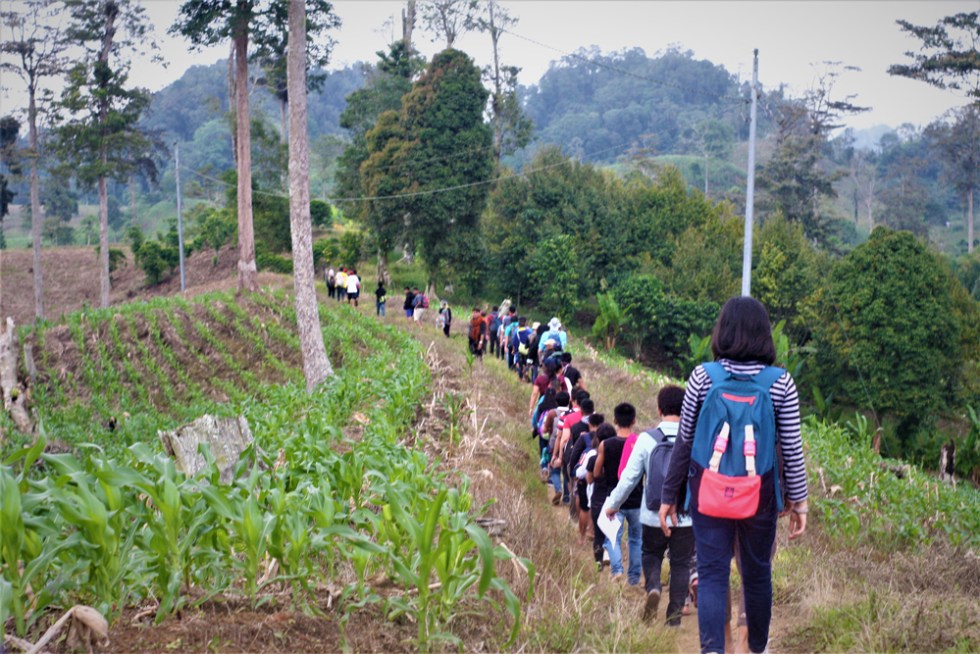 It was a small community surrounded by hills which served as their farmlands where 32 families were living together in houses made of bamboos and cogon grass.

The group was assigned to four groups to gather evidence of the massacre and other rights violations in the area. One of the guides and resident of Barangay Ned, Edwin Glam, said that it was around 10 o’clock in the morning of December 3 when “Ned Barangay Captain Bebot Lobraita arrived with some companions including a Barangay kagawad (council member) carrying a radio transistor.” The two immediately called for a meeting with the community leaders including Datu Victor Danyan, head of the T’boli-Dulangan Manobo tribe.

“Lobraita,” he added, “asked Datu Victor to surrender as a member of the New People’s Army.”

But Lumad leader refused and said, “why would I surrender when I am not an NPA and I don’t have firearms?” Glam told the team.

Glam recalled that before the barangay captain left the community they took pictures of the village elders including their identification cards and offered them bread, which the elders refused to eat.

He told the fact-finding team that approximately 30 minutes after Lobraita left to head to Sitio Bermuda in Barangay Katorse Bagumbayan, they heard gunshots coming from the hills southeast and southwest of the community directed to them.

“I immediately hid in a tree near Datu’s house but I saw Datu Victor went out to search for his sons who were at the farm lot. But Datu fell immediately on the ground after he was shot in his left chest,” Glam narrated in vernacular.

Datu Victor Danyan, his sons Victor, Jr., and Artemio; Pato Celardo, Samuel Angkoy, To Diamante, Bobot Lagase, Mateng Bantel were killed on the spot. On the other hand, Luben Laod and Teteng Laod were wounded.

According to another guide, “the firing lasted for three days,” that prompted the forced evacuation of community members.

Datu Victor of the T’boli-Dulangan Manobo tribe is known as a strong leader who is firm in his stand opposing the operation of the David M. Consunji company within their ancestral land.

Since June 31, 1991, the Dawang Coffee Plantation used to be a part of the logging concession of the Sarmiento Industries covering the towns of Kalamasig, Bagumbayan, Isulan, Palimbang, all in Sultan Kudarat, and the municipality in Maitum, Sarangani.

The logging concession was then covered by the Industrial Tree Plantation Lease Agreement (ITPLA) No. 238 until June 1991. A year later, the ITPLA No. 238 was converted into the Industrial Forest Plantation Management Agreement (IFMA) 022 and awarded to Silvicultural Industries Inc. (SII), which is owned by the Consunjis. 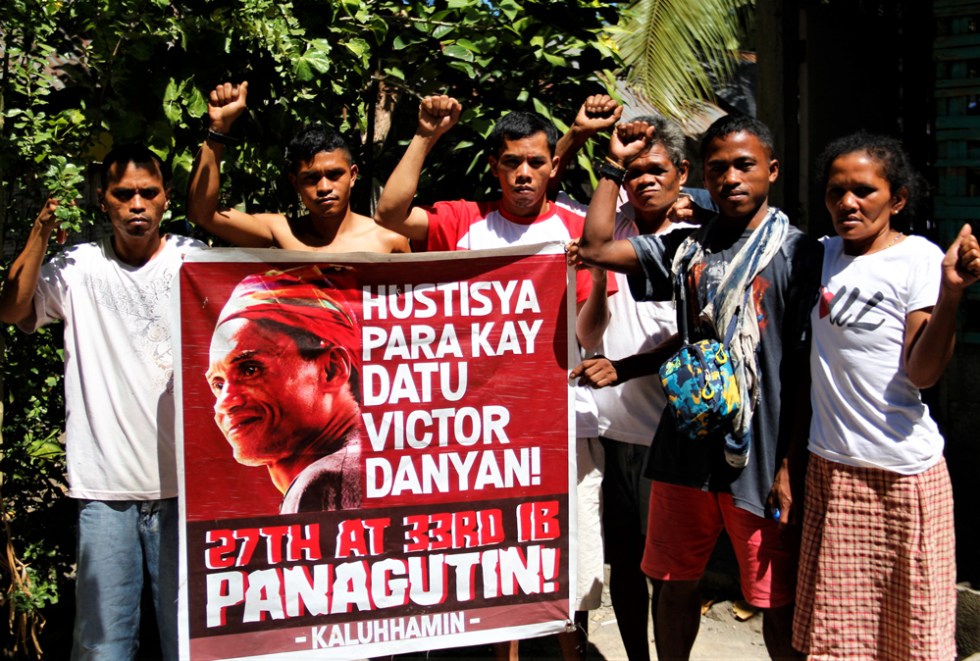 Survivors of the Lake Sebu massacre call for justice for slain Lumad leader Datu Victor Danyan and seven others in an evacuation center in Koronadal City. (Kath M. Cortez/davaotoday.com)

According to the T’boli-Dulangan Manobo, the contract of the company to use their ancestral land expired on December 31, 2016. The total area leased to the company is 11,862 hectares also expired on the same date.

Sources revealed that IFMA 022 was not renewed. Instead, it was reportedly ‘merged’ with the other IFMAs of the Consunjis in Sultan Kudarat Province.

Datu Victor was resolved to reject the renewal of the contract with the Consunji’s company under Industrial Forest Plantation Management Agreement (IFMA) 022 sometime in 2015.

The tribal chieftain also opposed the renewal of the company’s coffee plantation operation in 1,600 hectares of their ancestral land and insisted that they should use it for farming. Datu Victor then ordered that the coffee trees be cut in order for them to occupy the land thus, earning the ire of the Consunjis.

Upon arrival, the delegates were surprised to see a deserted community just like a ‘ghost town’. Nobody was there; what was left were some belongings and some ‘kubo’ (native huts) that are starting to collapse. 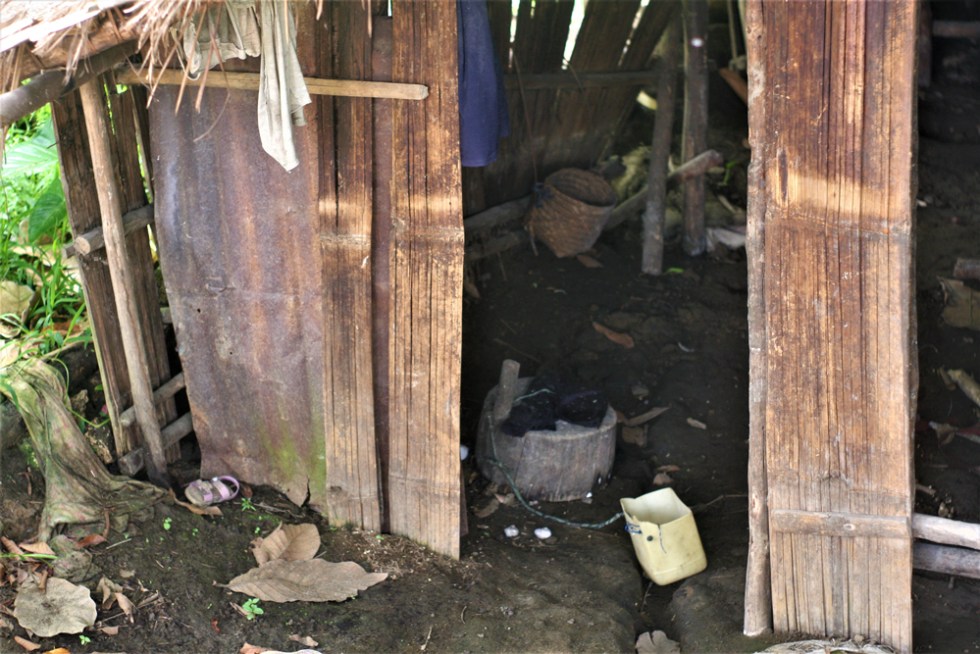 This portion of Datu Victor’s house used to be a production room where they grind corn and store seeds for planting. (Kath M. Cortez/davaotoday.com)

Some of the houses were full of grass rolling to the roof while many of the belongings like cooking utensils, dresses and native crafts inside the house were left dusty on the floor.

It was surrounded by corn fields between hills and in the middle of the community was the Sitio plaza that used to be a merry place for children to play and adults to gather for community activities. 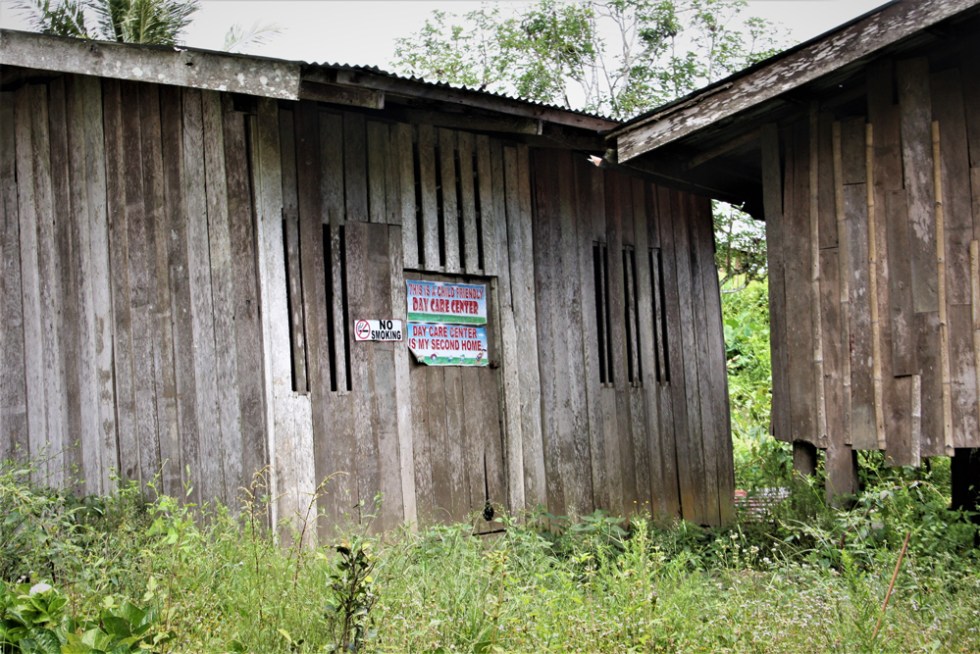 Classes at the daycare center were suspended after members of the community fled their homes in December last year. (Kath M. Cortez/davaotoday.com)

The daycare center located in the center of the community, the basketball court with a stage where festivals, meetings, and weddings were used to be held, were all left behind.

Some books and other paper materials were left scattered on the floor of the daycare center. All covered with dust and dirt.

The place has no electricity and water supply. But the Lumad said they managed to live with the help of each community member.

About eighteen families are currently seeking refuge in Koronadal City after they fled their homes right after the incident. On December 9 to 15, 2017, they held a protest camp-out in front of the South Cotabato Provincial Capitol to call for justice and seek help from the provincial government. But there was no response from the Capitol.

The 13-year-old grandson of Datu Victor, Bossing, is among the survivors of the tragic incident that killed members of his family.

Bossing, in an interview said that he was hit by a bullet in his right foot while peeing outside their kitchen when the firing started around noon. They immediately hid inside Datu Victor’s house along with her mother and siblings. When the situation permitted, they left the village out of fear and in a hurry.

He was able to survive but his father, Victor Danyan Jr. also know as Yolly, was killed while tilling their cornfield. 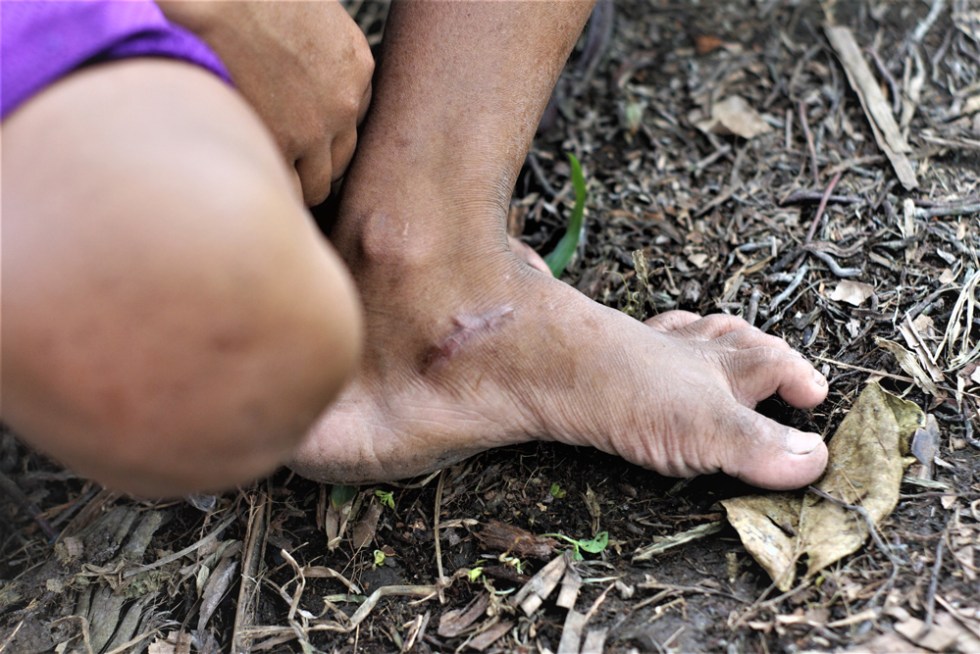 Bossing, 13, shows where he was hit by a bullet when soldiers allegedly opened fire towards them on December 3, 2017. (Kath M. Cortez/davaotoday.com)

Bossing was timid and teary-eyed as he recalls what happened on that fateful day. He said he used to help his grandfather, Datu Victor, in farming and hunting of birds. Datu Victor also taught him how to properly plant corn and use a ‘Pana’ for boar hunting.

“I want to go back to our home and play just like before,” Bossing said.

Meanwhile, Lita Danyan sister of Datu Victor, also recounted what happened that day. She was among the second batch of evacuees composed of 11 families who were not able to leave the community immediately due to heavy military presence.

That day, Lita was with other women and children who stayed at Datu Victor’s house. Petrified and anxious, they just heard gunshots for three days. Soldiers would shoot them whenever they try to leave the house, she added.

“I was very terrified. I don’t know what to do but at the back of my head, I know we need to escape,” shared Lita.

She and her group was the last batch to leave the community heading to Sitio Tuwali where they finally able to had their first meal after days of hiding.

The couple, Piloy and Punda Itom, who also served as guides of the team shared their experience during the incident. Nothing was left of their belongings as they scamper to escape to the adjacent community.

Punda was on tears as she still feels nervous every time she remembers how the soldiers fired bullets towards them.

“I was sacking corn along with my son who is just meters away from me. I saw him fall to the ground and shouted his name. He was wounded. I ran as fast as I could to the direction of our house and called my husband. We joined others and ran as fast as we can towards Sitio Tawan Dagat that day,” recalled Punda Itom.

According to Anakpawis Representative Ariel Casilao, “there is a substantive evidence to establish that it was a massacre and not an encounter between the military and members of the New People’s Army based on the accounts and statements of the survivors.”

He said they already filed Resolution No. 1550 before Congress, directing the Committee on Human Rights to conduct an inquiry, in aid of legislation, with regards to the incident. A committee hearing will be scheduled.

“I am very much convinced that there are many human rights violations in this area in lieu of the current declaration of Martial law,” Casilao said.

The delegation found another four empty bullet shells and a military identification card in their ocular visit to the community and the cornfields, where the dead bodies of Datu Victor’s sons were found.

They also secured affidavits of the victims noting that these additional evidences will be part of their preparation to file a case against the perpetrators.

All the foreign and local delegates of the International Solidarity Mission would meet in Davao City on February 23 for the 7th Mindanao Human Rights Summit to collate the findings of the simultaneous fact-finding missions and to forge unity in calling for justice to all the victims of human rights violations and hold the Duterte administration accountable. (davaotoday.com)