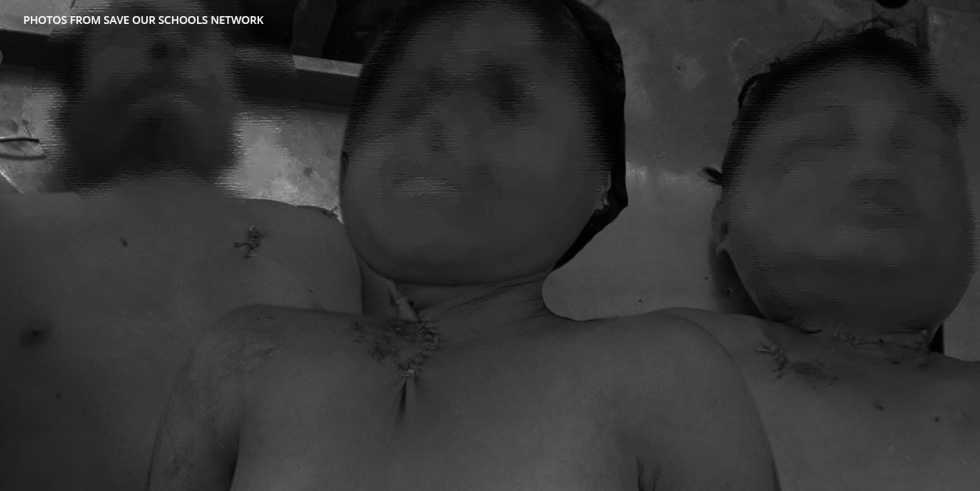 GRUESOME. Families of the three slain Manobo in Lianga share the photos to Save Our Schools Network which they took upon receiving the bodies that the military turned over to them. The families said the victims were harvesting abaca hemp when the incident happened on June 14 in Barangay Diatagon, Lianga, Surigao del Sur. One of the victims is Angel Rivas, 12, who currently attended class at the Alternative Learning Class of the Department of Education before her gruesome death. The military accused Angel of being “a NPA child warrior.” (Photo from the families of the victims shared to SOS Network Facebook Account)

DAVAO CITY, PHILIPPINES – Families of the three slain lumad in Lianga town in Surigao del Sur were devastated to see the bodies of the victims almost beyond recognition.

Angel Rivas’ body, the 12-year old girl, was wrapped in plastic and tape. Her face down to her neck were filled with stitches to hold together her disfigured face. Lenie’s body also bore stitches all over while Willy’s legs were plastered with packaging tape to cover the frightful sight of fractures.

The aunt of the Rivas sisters said the death of her nieces are unbearable and unacceptable.

“Gibastos gyud ang iyang lawas. Gi-rape, gihilabtan, guba kaayo ang atubangan (Her [Angel] body was defiled. She was raped, her genital severed),’’ Angel and Lenie’s aunt said in a post of Save our Schools (SOS) Network on FB.

Fearing for her life, the aunt requested she’d not be named. She also said the soldiers refrained the families from taking photos of the bodies.

SOS said Lenie and Willy’s bodies were found together in a different location from Angel’s.

However, the military maintained that those slain in Lianga were alleged members of the New People’s Army (NPA).

“As proof that they were NPA… they were holding firearms and were the first to fire on the soldiers,” said Maj. Rodulfo Cordero Jr., spokesperson of the Army’s 4th Infantry Division (4ID).

Lt. Col. Benedict Harvey Gernale, the battalion’s commanding officer, said troops from the 3rd Special Forces Battalion engaged with a unit of the NPA who were foraging for food in Sitio Tibog, Mabuhay, Prosperidad on June 14 and later withdrew after the skirmish.

Gernale said the rebels fired at the soldiers and detonated an anti-personnel mine.

During the Prosperidad operation, the soldiers caught a female minor, and found at the area black powder, blasting caps, and assorted nails, which Gernale described as integral components of an anti-personnel mine.

“Our operating troops pursued the withdrawing enemy and captured a minor NPA combatant at the encounter site. The firefight ensued for more than 10 minutes,” said Gernale.

The minor was turned over to the municipal social welfare and development office in Prosperidad town for “psychosocial intervention and appropriate assistance.”

He added that despite the rugged terrain and the danger from the enemy’s sniper fire, “our soldiers pursued the withdrawing enemy.”

Cordero opined it was possible that the minor killed could have used the hand gun as it was found near her, although he said an NPA child recruit can carry and fire a larger and heavier firearm such as an M16 or AK47.

Brig. Gen. Allan Hambala, commander of the Army’s 401st Brigade, said the incident “once again proved that the Communist Terrorist Group (CTG) has no regard for human rights and they are blatantly violating the International Humanitarian law (IHL) by recruiting minors to join their senseless armed struggle.”

For his part, Brig. Gen. Oliver Vesliño, acting commander of 4ID and Joint Task Force Diamond (JTF), said that concerned Armed Forces of the Philippines (AFP) units under the JTF are pursuing the fleeing rebels so that “justice will be served to the victims of their lies and deception.”

“AFP units under JTF Diamond will continue its relentless security operations against the CTG in Caraga region to destroy the armed group, and stop its resource generation and recruitment of minors. We will also file cases of IHL violations against the leadership of NEMRC,” he said.

Vesliño also extended his condolences to the bereaved families of those slain alleged rebels.

He then urged the remaining NPA members to return to the fold of the law and avail of the Enhanced Comprehensive Local Integration Program (ECLIP) of the government.

In a statement posted on the Liberation, the official publication of National Democratic Front of the Philippines (NDFP) in March 2019, it criticized the military program such as ECLIP as its ‘’massive source of corruption’’ citing the increased of budget for the board and lodging of rebel returnees from P7,000 to P21,000 to the police or local government units (LGUs) while the P65,000 per rebel remains the same excluding the rewards for every firearm turned in.

Progressive groups condemned the killings of the Rivas sisters and their cousin Rodriguez who they asserted as farmers and belonged to the Manobo tribe, as opposed to the claim of the military that the fatalities were NPA fighters.

According to these groups, the three were “shot by soldiers encamped in their community while they were harvesting abaca at about 1pm on June 14 in Sitio Panukmoan, Diatagon.

For Sandugo – Movement of Moro and Indigenous Peoples for Self-Determination, it said a group of farmers even asked permission from the military before going to the abaca farm.

The Alternative Learning Center for Agricultural and Livelihood Development, Inc. (ALCADEV Inc.) said on its FB page that Angel was currently enrolled at the Department of Education’s Alternative Learning System (DepEd ALS). She completed her Grade 6 at the Tribal Filipino Program of Surigao del Sur (TRIFPSS) which is one of the 22 Indigenous People’s schools that were forced to close.

Katribu said Angel was not an NPA “child warrior” that the military claimed her to be.

Katribu said the Army’s 48th Infantry Battalion (IB) and the 3rd SFB have been camping in the area for several months now.

“The continued brutal killings of indigenous peoples is the policy of the Duterte regime to silence, threaten and instill fear to those who are against its oppressive and opportunistic programs, policies and rule,” Rei Paulin, Katribu national coordinator, said in a statement.

He said the “lumad” or tribal peoples only want to live in peace and till their ancestral lands.

“Their desire is to be afforded a fair opportunity in life through delivery of basic social services such as education and health. Their deprivation is the reason why they are involved in a struggle to defend their communities and build their own schools,” Paulin said.

“Amid the economic crisis caused by the pandemic, these lumad-Manobo are trying to live, but why, even a minor, were killed by soldiers,” Kakay Tolentino, Bai Indigenous Women’s Network national coordinator also said in the same statement.

Katribu is calling on for “immediate justice for the three killed and all the victims of extrajudicial killings (EJKs) in the country. Stop militarization in the countryside. Oust the Commander-in-Chief Duterte.” (WITH A REPORT FROM JIGGER J. JERUSALEM)