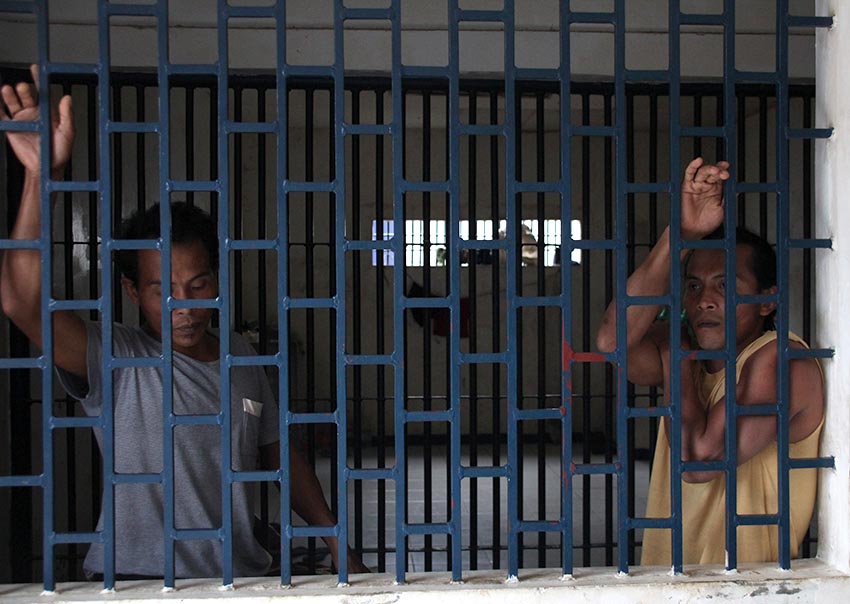 BROTHERS BEHIND BARS. Ruel Cololot (left) and Ramil Cololot (right) languish behind bars after they were arrested by authorities on August 2 in Quezon town, Bukidnon province. Authorities claimed improvised explosives and firearms were found in their possession and accused them of being members of the New People’s Army. The two however, deny the accusations, saying they were ordinary farmers. (Paulo C. Rizal/davaotoday.com)

In an interview with Davao Today on Monday, Ruel said he did have some experience in making explosives, but said it was mostly limited to paint jobs. He said he could not assemble IEDs on his own.

Ruel also claimed that he has already cut ties with the communist guerrillas since December 2016, preferring instead to focus on farming his two-hectare land in Kiburiao Village in Quezon Town, Bukidnon.

“Wa ko mi-deny. Ako sir. Sauna nakalihok gyud ko sauna. Pero karon wala na gyud ko. Gusto gyud ko mulikay. Kay ako man na sila giingnan nga dili ko pwede mag sige ug lihok sa bukid kay naa koy mga anak, mga gagmay pa. Unya gitugotan ko nila, gipa-uma ko (I didn’t deny it. I did join the movement before, but I don’t anymore. I really wanted to distance myself from them. I told them that I could no longer continue with the work in the mountains because I still have young children. So they let me be to farm),” he said.

Ruel, along with his younger brother Ramil, were arrested by a combined police and Army ​soldiers on August 2. Found in their possession were several improvised explosive devices and other paraphernalia. 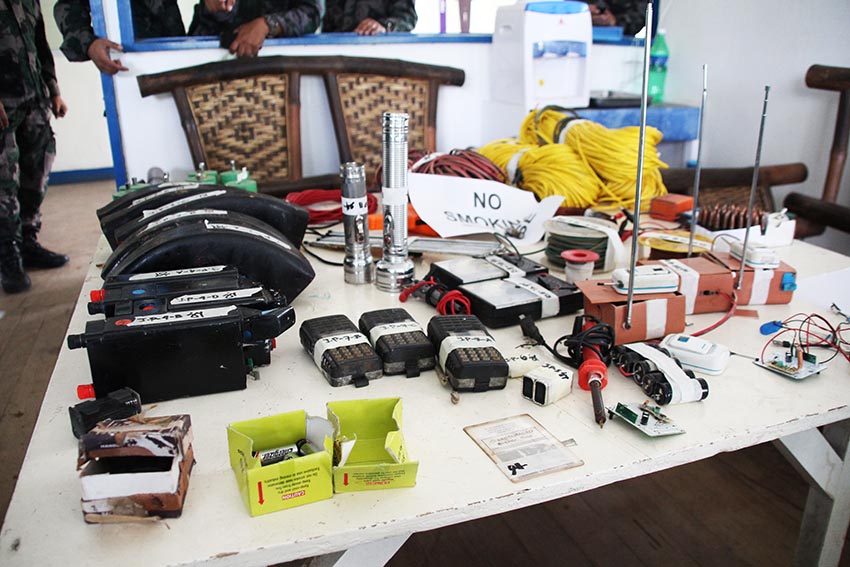 EXPLOSIVES. Photo shows the improvised explosive devices and other paraphernalia allegedly found in the possession of brothers Ruel and Ramil Cololot who were arrested last August 2 in Quezon, Bukidnon. Both denied the allegations that they are “expert bomb makers.” (Paulo C. Rizal/davaotoday.com)

Also found in Ruel’s possession was an identification card identifying him as a member of the Anakpawis Party list, which he said he obtained when he was hired by the partylist organization ​as a poll watcher during the previous elections.

Ruel said he could not recall the specific year of the elections, but his identification card was signed by former Anakpawis Partylist Representative and now Agrarian Reform Secretary, Rafael Mariano.

​The two were now ​detained at the Malabalay City Police Station in Malaybalay, Bukidnon after being charged with Illegal Possession of Firearms and Explosives.

Days before his arrest, Ruel said he saw his former comrades pass by his farm carrying heavy objects. He said he did not know what the objects were, or where the guerrillas eventually brought them.

He said he suspects those were the IEDs that were eventually found in the hut of his brother Ramil, who likewise denied knowledge of the IEDs.

Ramil said he first found the explosive contraband inside his hut on July 31, but was too scared to report to authorities.

When the police and soldiers came, Ramil led them to the IEDs in his hut willingly.

Ruel said the uniformed men coerced him into posing for the photographs, which incriminated him.

“Pagdakop sa amoa, gidala mi didto sa erya. Pag abot namo didto, katong mga butang nga nakita nila didto, gipatudlo sa amoa. Ako pa ganing giingnan nga di ko mutudlo ana sir, kay kung ako nang tudluon, icharge na ninyo sa amo nga amoa na. Ana man sila nga ayg kabalaka, wa lagiy mahitabo sa inyuha. Tudlua lang na, kay shotan ra mo (When they arrested us, they made us go to the area where they found the IEDs. Then they made us point to the IEDs. I told them, I will not point at those, because if I did, you would make it look like we owned those explosives. They told us not to worry, nothing will happen to us. Just point, because you will be photographed),” he said.

“Gipapas-an pa gyud ko nila atong … RPG man daw to, wa man ko kaila ato (They made me lift that … they said it was an RPG. I didn’t know what it was),” he added.

Ruel said the uniformed men beat him to submission, so he did as they asked.

“Sobra na pud sila. Ako gibunal-bunalan man gyud ko nila pero okay ra to sa akoa, wa kaayo nako to gibati. Dawat pud nako nga nakasala ko sauna kay niapil ko niana. Okay ra to sa akoa. Ang kaning akong manghod, giingnan nako na wa gyud niy apil sir, inosente kaayo na. Ana sila, ato lang ning i-apil kay naa man gyud sa iyang payag. Wa lagiy mahitabi ani. Unya unsa may nahitabo karon nga pareho ra man mig kaso (They were too much. They beat me but I didn’t mind it because I did join the NPA before. But my brother, I told them he’s innocent. They said he had to be included because the IEDs were in his hut. They told me nothing bad would happen. But now we are both in jail for the same case),” Ruel said.

For her part, Bukidnon Provincial Police Public Information Officer Police Senior Inspector Jiselle Ester Lou Longakit said she could not comment on the circumstances on how the brothers were arrested, but said it would be up to the courts to decide the veracity of their claims.

She said their intelligence reports both point at both brothers as being members of the NPA.

However, she clarified that their arrest and subsequent detention was not on grounds that they were members of the communist armed group, but because of the seized contraband.

“Pero based sa tong report, naa man gyud tay nakuha nga ebidenysa, identified gyud pud sila nga taga pikas” (but based on our report, and the seized evidence, we have really identified that they are from the [NPA]),” she added. (davaotoday.com)