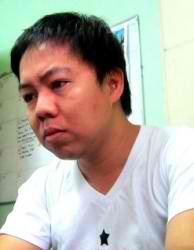 A missing University of the Philippines professor who was conducting a study in an area hit by Typhoon Pablo in Davao Oriental was found early Thursday morning in Mati Provincial Hospital under police custody.

According to Juland Suazo, Panalipdan (Defend) spokesperson, Kim Gargar, a physics professor from UP Diliman, was conducting a study in the forested areas in Cateel in preparation for the rehabilitation program of Balsa Mindanao, a non-government initiative doing relief and rehabilitation to disaster areas.

But Gargar and a companion, Restita Miles from Rural Missionaries of the Philippines, went missing Wednesday.

Gargar was later found in Mati Provincial Hospital by a team led by fellow UP professors, with a fractured leg and injuries in his head and reportedly under custody of the Criminal Investigation and Detection Group (CIDG).

He reportedly sustained the injury when he fell in Aliwagwag Falls in Cateel, a landmark that was ravaged by Pablo, and he was later found by elements of the 67th Infantry Battalion conducting pursuit operations against New People’s Army.

There is no news on the whereabouts of Gargar’s companion Miles.

Gargar will be reportedly filed inquest proceedings this morning at the Mati court for charges of multiple murder, illegal possession of firearms and violation of the Comelec gun ban.