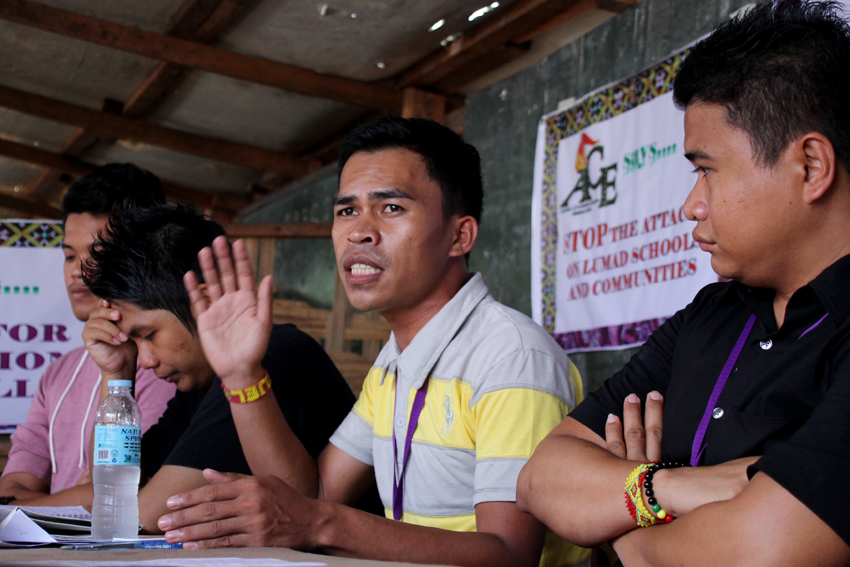 Ramil Miguel of the Association of Community Educators in Mindanao during a press conference last May 20, 2016 at the UCCP Haran compound where displaced Lumads from Davao del Norte take refuge due to the militarization in their community. (Ace R. Morandante/davaotoday.com)

This was the frantic text message sent by teacher Ramel Miguel to Ricky Balilid, moments after the Salugpongan Ta Tanu Igkanogon Community Learning Center in Sitio Nasilaban, Talaingod, Davao del Norte was fired upon by a certain Rodel Buntanlog on Tuesday, 10 am.

Miguel is the chairperson of the Association of Community Educators, a group of volunteer teachers working in IP schools. Balilid is the group’s vice-chairperson.

In the same text message, Miguel said Buntanlog left after 15 minutes, but not before vowing to torch the school upon his return. The gunfire claimed no lives or injuries.

In a phone interview with Davao Today, Balilid said Buntanlog had been hunting for Miguel for some time, and threatened to kill the teacher should they meet face to face.

“Sa pagkakaron si Sir Miguel naa pa gihapon kahadlok ug na-trauma siya tungod sa panghitabo. Wala pa gihapon naulian sa iyang kahadlok (Right now, sir Miguel is still in a state of trauma because of the shooting. He has yet to recover from the fright he experienced),” he said.

Balilid said Buntanlog wanted to prevent the students from studying in the school, as he believed the school was run by the New People’s Army.

Balilid said Buntanlog was a member of the Alamara, a paramilitary group allegedly armed by the military to hunt for NPA sympathizers among Manobos in Talaingod, most of whom are relatives.

In a separate phone interview, 60th Infantry Battalion officer-in-charge and 1001st Infantry Brigade Deputy Brigade Commander Col. Gilbert Saret confirmed that Buntanlog is a member of the Citizen Armed Force Geographical Unit. Saret however, denied any knowledge of Buntanlog’s links with the Alamara.

Saret confirmed that they have received reports of the incident, but are still trying to locate Buntanlog as of press time.

“Should we know of his whereabouts, we’ll verify the allegations. We will investigate. We’ll also look into his psychological and emotional well being,” he added.

Based on Buntanlog’s claims, Saret also told Davao Today that Buntanlog was a regular NPA fighter for almost 14 years, but had surrendered to the 1003rd Brigade in 2013.

Saret said Buntanlog claimed to have participated in the founding of the school, and also taught there for some period of time.

But Balilid denied this claim and said it is a way of the army’s vilification of the school.

Balilid said the army has been consistently accusing the STTICLC of being run by the communist guerrillas, even though they have been issued operational permits by the Department of Education.

In previous reports, other teachers of the school have claimed of being harassed by military intelligence operatives.

In July last year, STTICLC executive director Ronnie Garcia claimed he and his family were harassed by military agents in Tagum City.

Balilid added that on June 2, an Alamara member barged in on a class in STTICLC looking for a 17-year old student named Lando.

The Alamara said the military was looking for Lando who had a standing warrant of arrest. Miguel confronted the Alamara and refused to release Lando.

Angered, the Alamara member issued death threats to Miguel, who has since then gone into hiding in Baranggay Nasilaban, Talaingod where the school was located.

In several instances, the army denied any links to the group, reducing the conflict as mere “pangayaw” (tribal wars) between rival groups.

On that same day in Baganga, another school teacher, Jiper Marson left his duties as a school teacher of the MISFI Academy there after an intel soldier allegedly threatened to harm him and his family if he continues to work for the school.

Balilid said they have been unable to contact Marson since then.

“It’s possible he may still be processing the trauma and gone hiding, or that there is simply no phone coverage there,” he said.

The two schools have claimed to be the butt of attacks since their inception. In 2015, a MISFI school in Kitaotao, Bukidnon, was ordered shut down by village chief, Felipe Cabugnason, who also accused the school of being run by the NPAs.

Balilid called for a stop to the harassment and the vilification of their schools.

Balilid also denied links with the communist guerrillas, saying that the schools were born out of the Lumad’s will to provide education to their children.

The schools also received initial funding from local and international humanitarian groups. STTICLC for example, was built in partnership with the Rural Missionaries of the Philippines.

“Sila pa ang nagbayanihan ana (They built the schools themselves),” he added. (davaotoday.com)