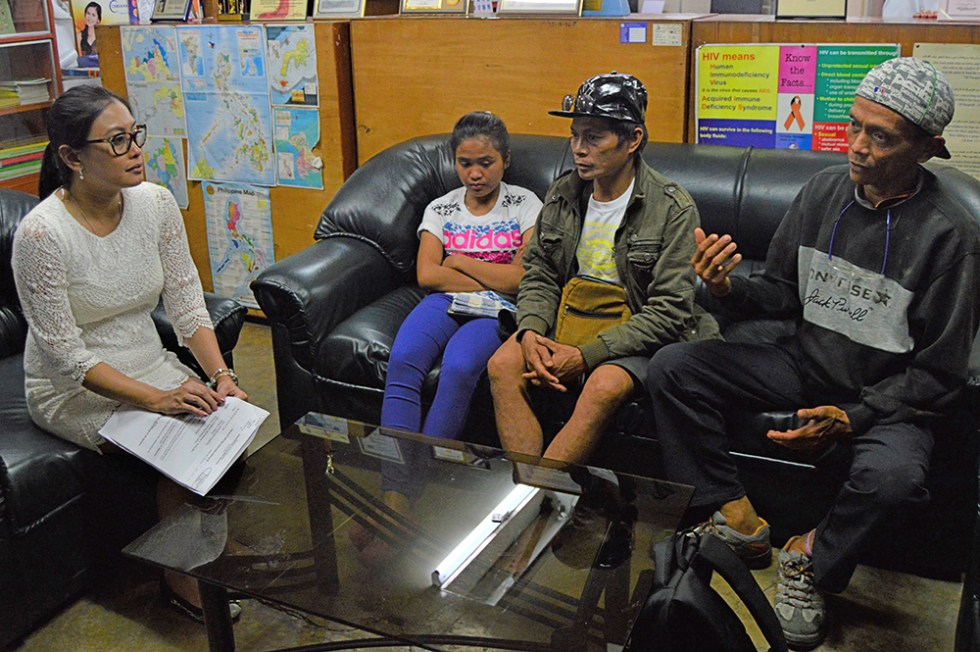 The Commission on Human Rights-10 (CHR-10) has accepted the complaint of Roy Ebarat (right) and Julieto Babatido (second from right) who were accused by state forces as members of the New People’s Army (NPA). Lawyer Jeanne Ivy Abrina (left), CHR-10 regional director, said they will investigate the complaint. (Jigger J. Jerusalem/davaotoday.com)

CAGAYAN DE ORO CITY, Philippines – The Commission on Human Rights-10 (CHR-10) will investigate the complaint of two civilians who were accused as Communist rebels by state agents in the wake of the massive evacuation of residents in hinterland villages in Opol town, Misamis Oriental, due to the reported presence of hundreds of alleged New People’s Army (NPA) fighters.

“We have already docketed the case and had their (complainants) sworn statement taken,” said Jeanne Ivy Abrina, CHR-10 regional director, in an interview on Monday, August 14.

CHR-10 identified the civilians as Roy Ebarat and Julieto Babatido. Both are residents of Barangay Tingalan, in Opol, who sought the help of the agency in filing complaint against members of the security forces whom they accused of entering the homes of their neighbors without search warrant and alleging that they are members of the NPA.

The complaint stemmed from the displacement of hundreds of residents from the villages of Nangcaon, Tingalan, and Limonda following the sighting of armed individuals believed to be NPA guerrillas.

Abrina said they will look into the complaint of Ebarat and Babatido and endorse their findings to appropriate government agencies.

“We will investigate this because this in not only in relation to our mandate but also with the continuous monitoring of martial law-related human rights violations,” she said.

She said the complainants are “presumed to be civilians and they are entitled to protection under the international humanitarian law in an armed conflict context and they will only lose their civilian protection if they [have direct participation] in the hostilities,” she added.

Ebarat and Babatido went to the CHR-10 office on Monday, August 14, with “Anna” (not her real name), who witnessed the alleged intrusion of government soldiers into the home of Sunny Payla, Ebarat’s father-in-law, in Sitio Lagundang, Tingalan, on Saturday afternoon, August 12.

Anna said about eight soldiers were at the front and rear doors of Payla’s house. They were asking for Ebarat’s and Babatido’s whereabouts.

“They (soldiers) also asked if the supply has already arrived and where the firearms were hidden. We had no idea what they were talking about,” she recalled.

She said Payla’s house was surrounded by troops and she saw more soldiers and two army trucks on the road.

After few minutes, boarded the military vehicles and left, she said.

Ebarat said at the time of the search, Babatido and him were at the Iglesia Filipina Independiente (IFI) church at Barangay Bulua to attend a meeting with Pangalasag, an indigenous people’s (IP) group.

He said they were on their way home when they received a text message from his parents-in-law that the military were looking for them. Incidentally, they also met the army trucks on the road.

“We fear of being arrested for no reason, so we left our motorcycle at the house of our association president and walked home. Thinking that there were still some soldiers waiting for us on the road, we hiked through the palm oil plantation,” Ebarat said.

He said they arrived in their respective homes at around midnight but they could not sleep, fearing the soldiers would come while they were in deep slumber.

“As of now, we fear for our security. We are asking the CHR to protect us and our rights as civilians,” Ebarat said
The Kalumbay Regional Lumad Organization has condemned the action of the military and accused soldiers who searched Payla’s house as those of the Philippine Army’s 58th Infantry Battalion, a unit of the 4th Infantry Division.

Datu Jomorito Goaynon, Kalumbay regional chairperson, said they believe that the incident was related to the struggle of the Pangalasag who is fighting for their ancestral domain which is now under threat due to the alleged incursion of a private company, which owns palm oil plantation in the area.(davaotoday.com)