PARAÑAQUE CITY – After the afternoon mass on Wednesday at Baclaran church, priests, seminaries, and the Lumads who are delegates of the human rights caravan Manilakbayan 2015 marched from the church doorsteps up to the gates of the church compound showing their unity against the Asia Pacific Economic Cooperation Summit that ended Friday. 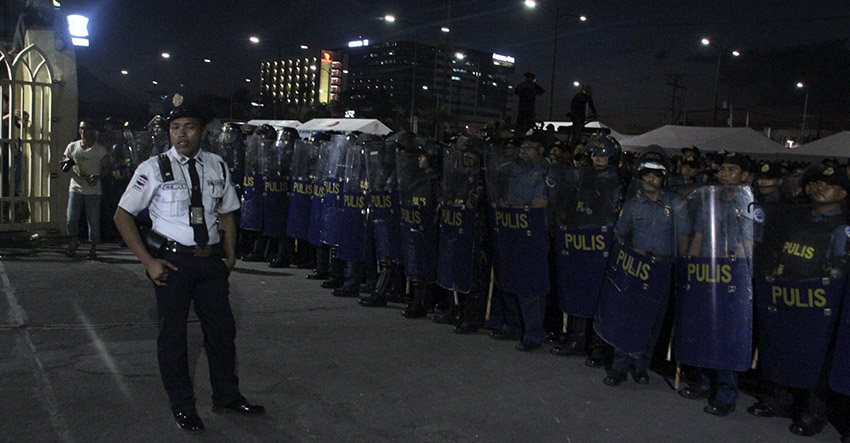 Before reaching the gates, police forces outside alerted and barricaded right in front of the gate to block any protester from getting out of the church.

Reading the statement of the Redemptorist Brothers here, Father Teody Holgado of Baclaran Church said, “this time, the government will brag its Daang Matuwid (straight path), [President Benigno Aquino III] will brag it to the APEC summit.”

Fr. Holgado urged everyone to reflect on the sincerity of President Aquino’s campaign.

“In times where the killings are rampant, the Lumads are pushed and hid as if they were not humans, let’s ask on who would really benefit from this,” the priest said.

Just kilometers away from the church, economic world leaders gather (at the Philippine International Cultural Center in Pasay City) to discuss partnerships and agreements for the summit’s theme “Building Inclusive Growth, Building a Better World”.

After the march, a short program was held condemning the APEC as “it just worsen the poverty of the Filipino people.”

Pasaka Confederation of Lumads secretary general Kerlan Fanagel, said APEC is “just a systematic [way] of taking and plundering the ancestral lands of Lumads in Mindanao.”

Fanagel said that the APEC shows how the state hid, not only the urban poor, but also the protesting Lumads from Mindanao.

“They were not ashamed, they are serving the foreign visitors not the people,” he said.

Since Friday, when the Lumad protesters were evicted from Liwasang Bonifacio in Manila and transferred in a church compound here, hundreds of police forces cordoned the gates of the church with firetrucks and reserve forces. The Baclaran church offered their place for the Lumads to stay and camp after the eviction.

“This is how the National Shrine Mother of Perpetual Help (Baclaran Church) been known,” Fr. Holgado said.

He added that the Redemptorist brothers not only provided “safe and secured” place for the Lumads, but also offer humane heart to those whose lives are at risk.

“The shrine is safe to those lives at risk for challenging the greedy and for destroying the wall of lies,” he said.

The police, however, claims that their presence are for “security” for the Lumad protesters who are now camping in the grounds of the church.

Fanagel said that despite the number of police forces, “we will not yield, we have our right to freedom of expression.”

“The struggle of lumads from Mindanao will continue,” he said. 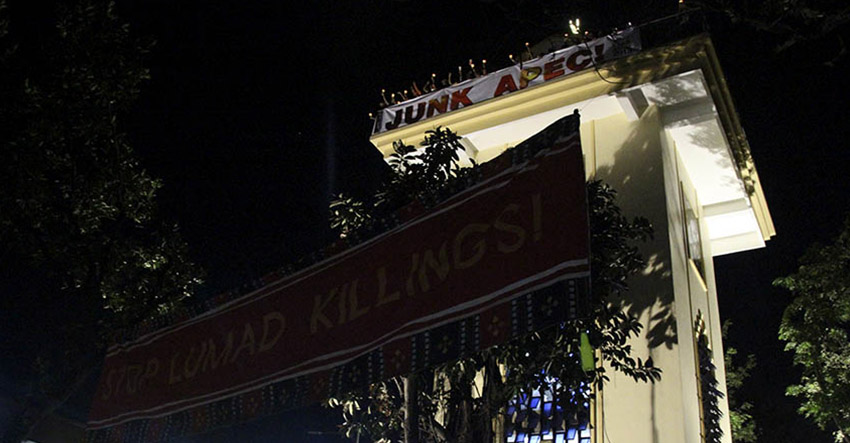 After the speeches, the leaders from the two groups proceed to the bell tower of the church and tied tarpaulins with calls to junk APEC on the left and front part of the tower. The five-storey tower is where the bells are found. (davaotoday.com)