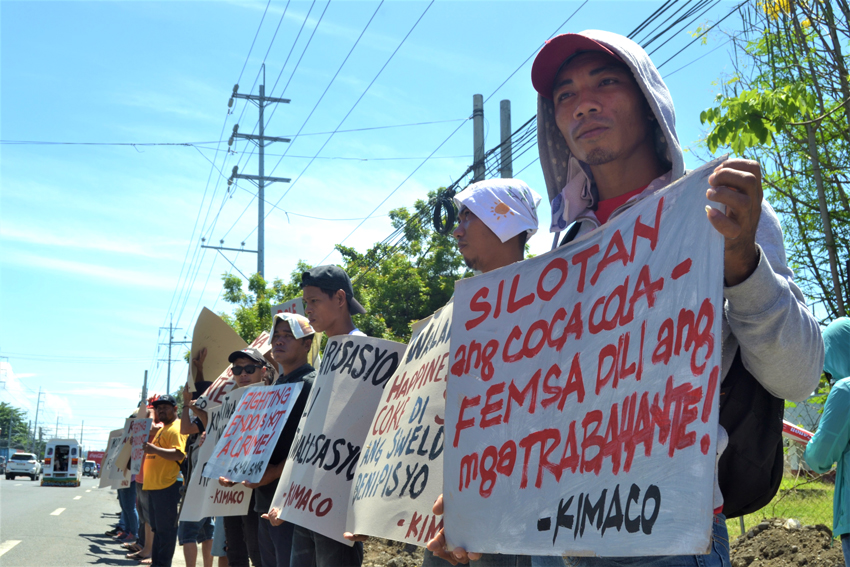 Members of KIMACO-KMU stage another protest action on Monday, April 9, 2018, in front of Coca-Cola FEMSA in Davao City. The group demanded for the regularization of 127 contractual workers. (Kath M. Cortez/davaotoday.com)

DAVAO CITY, Philippines — Members of Kilusang Manggagawa ng Coca-Cola (KIMACO KMU) staged another protest action on Monday, April 9, to call for the reinstatement of 65 workers who were dismissed last month and the regularization of all contractual workers under Coca-Cola FEMSA Davao.

Sustines Bantayan, chairman of KIMACO-KMU said, in an interview, that they are still calling for the regularization of retrenched Coca-Cola workers, as well as the remaining contractual workers as it is mandated by law and with President Duterte’s vow to end contractualization under his administration.

“Since March 31”, said Bantayan, “there has been no answer coming from the company nor the Department of Labor on the issues of workers.” This made them decide to continue the protest to air their voices.

After the temporary release of 10 workers on Friday, KIMACO-KMU is now planning to file charges against police authorities who dispersed the picket on April 2 over the detention of their members beyond the allowable period.

The 10 workers were arrested and detained at the Talomo Police Station for four nights and five days upon the order of dispersal by Davao City Mayor Sara Duterte-Carpio and Police Chief Inspector Ronald Lao.

A complaint was then filed against the 10 protesting workers by a certain Randy Pagatpat, who identified himself as a Coca-cola driver, for Grave Coercion while another complaint of Resistance and Serious Disobedience to an Agent of a Person in Authority was also filed by PO2 Richard Torregosa and PO1 Jomel Vigonte.

Fiscal Delfin Suarez Jr, issued a resolution on April 5 dismissing the Grave Coercion complaint but indicted the workers for Simple Disobedience to an agent of Person in Authority.

The Makabayan Bloc is now planning to file two house resolutions in Congress. This was confirmed by AnakPawis Partylist Representative Ariel Casilao during today’s protest.

Casilao, in an interview, said the progressive party-list in Congress will file a resolution to condemn the violent dispersal of protesting workers after the massive retrenchment of contractual workers of Coca-Cola FEMSA Davao City and a resolution to urge the President to immediately end the contractualization of workers in the country especially in his hometown.

Casilao also said that amidst the call to stop contractualization in many companies nationwide, it is alarming that there are still a lot of workers who suffer from it. These must be addressed by the government said Casilao. (davaotoday.com)