After a brutal massacre, father ‘lives’ in photographs 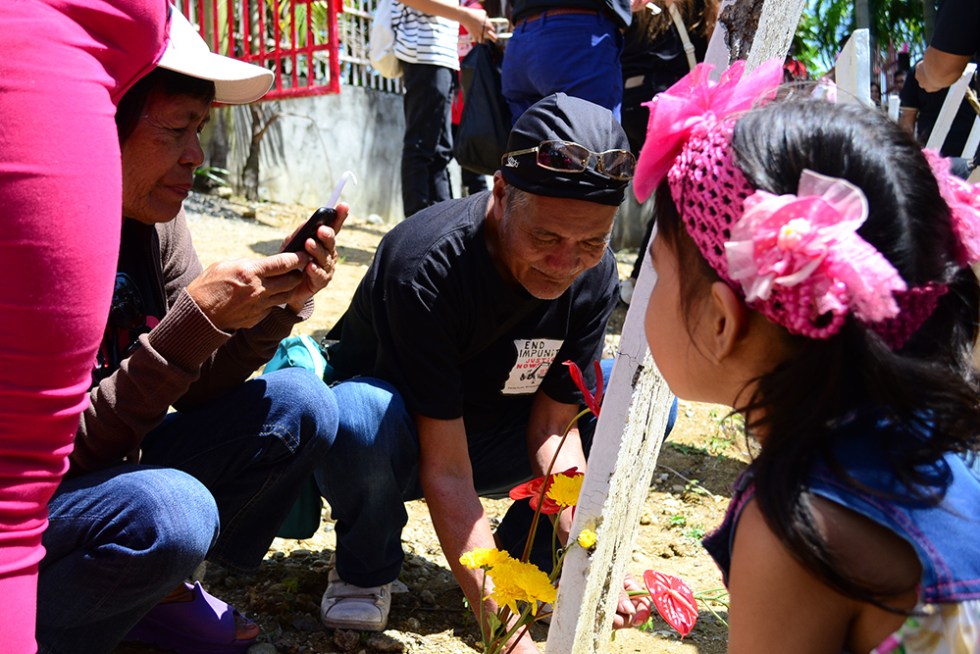 THE ORPHAN. Princess Caniban sits near a tombstone where the name of her father is written. She was only 8 months old when John Caniban, a news reporter of Peryodiko Daily News in Koronadal City was among the 32 journalists killed in Ampatuan massacre. (Robby Joy D. Salveron / davaotoday.com)

MAGUINDANAO, Philippines – On November 19, more than a hundred families of victims and journalists travelled in a convoy of at least 13 vehicles going towards the hills of Sitio Masalay in Barangay Salman.

A mass was offered shortly after the convoy arrived on top of the hills where a multipurpose hall was constructed in 2010. The hall was just beside the site of the massacre that significantly placed the Philippines on the map of the most dangerous countries for journalists.

Among the crowd was eight-year-old Princess Jane Caniban who is as old as the day her father was murdered along with 57 other people, 31 of whom were media workers.

On that day, November 23, 2009, she became among the orphans of journalists who were killed in what was touted as the single deadliest attack against journalists in Philippine history.

“Pa andito na po ako pa, kasi namimiss po kita pa (Pa, I’m here now because I miss you),” Princess uttered as she looks at her dad’s marker. In her hands were candles and flowers.

Virgie Caniban’s eyes welled with tears as she observed that moment. “She only got to know him in photos and in stories that I tell about him.”

Princess’ grandmother, 70-year-old Teresita Caniban, took care of her since she was young.

“She was eight months old when her dad died,” said Teresita, who was accompanied by her husband Leonardo, 65 years old.

John Caniban was the news bureau chief of Sultan Kudarat Gazette and writer of Periodico Ini from Sultan Kudarat. He was 30 years old.

Brenda Dalmacio, 53 also brought her two nieces at the massacre site on November 19.

Her sister, Eleanor, was a reporter for Socsargen News Today. She left Brenda with her three children, two of them were still babies when she died.

Her daughters, Aya, 8, and Kaykay, 9, joined hands as they sang “Our Father” during the mass offered for the victims. It was officiated by Fr. Ariel Destora, director of Social Action Center of the Diocese of Marbel.

Brenda said the two children were “very excited” to come to the massacre site to offer their mothers with prayers and candles. It was their second time to visit the place in Sitio Masalay, Barangay Salman. 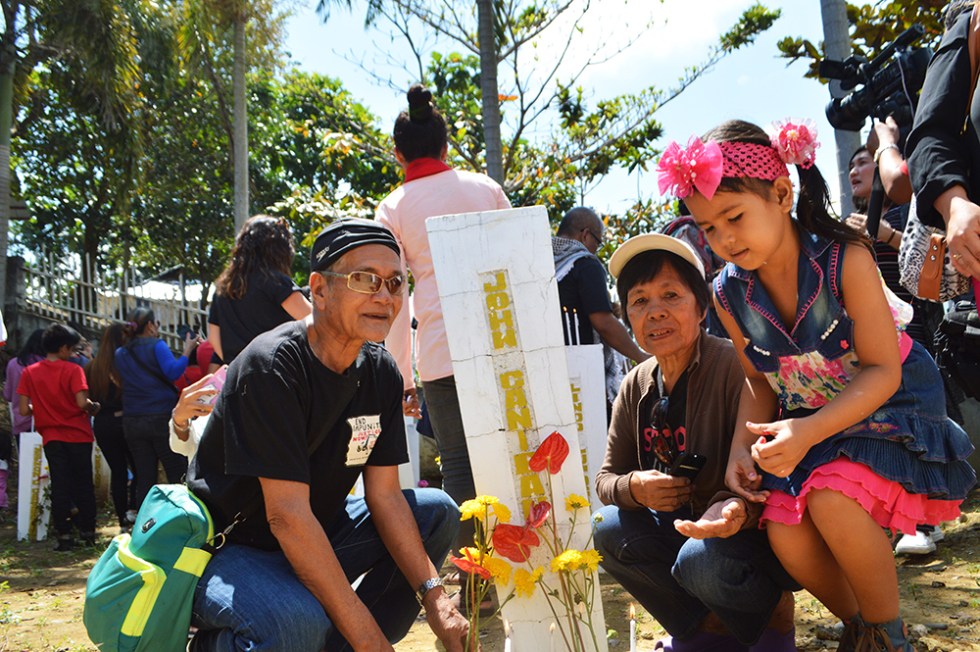 “Pa, I’m here now, because I miss you,” Pincess says as she looks at her dad’s marker. (Robby Joy D. Salveron / davaotoday.com)

On the day of the massacre, the journalists were covering the filing of the certificate of candidacy of then gubernatorial aspirant, Buluan vice mayor Esmael Mangudadatu to challenge Datu Unsay town mayor, Andal Ampatuan Jr.

The younger Ampatuan is the son of former governor of Maguindanao, Andal Ampatuan, Sr. Mangudadatu won as governor in 2010.

Justice for the victims’ families have been elusive. No conviction has been made for the past 8 years.

But Teresita hopes that the case that has dragged on for almost a decade would soon be over.

On Friday, November 17, lawyer Nena Santos, the lone private prosecutor said they are looking forward to a case resolution in 2018.

“After the presentation of evidence of the last five or 10 accused then we’ll wrap up. The judge can resolve the case for all accused,” she said during the meeting with families held in General Santos City.

Santos said since the case was filed in 2009, there were 115 people arrested. But dozens remain at large as the number of the accused stands at 196.

Out of those who were arrested, three people became state witnesses. Four died in detention, including the Ampatuan patriarch, Datu Andal. 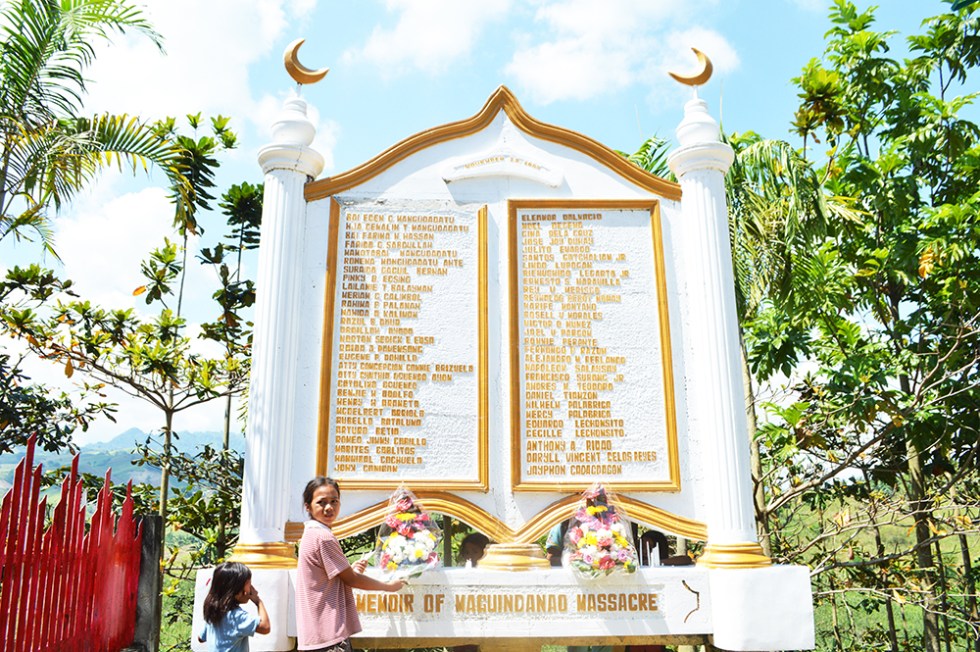 A monument stands near the massacre site in remembrance of the 53 victims of the Ampatuan massacre on November 23, 2009. (Medel V. Hernani / davaotoday.com)

The National Union of Journalists of the Philippines (NUJP) still sees “rough road” ahead as they expect the accused to submit appeals.

Despite the delays, Jo Clemente, acting chairperson of the NUJP, said the group, along with the families, will continue to seek for justice.

“What is important is to end the culture of impunity in the country. There are several media killings but no mastermind gets convicted, sometimes only the hard killers are proven in court,” she told Davao Today.

However, according to the Center for Media Freedom and Responsibility (CMFR) as of November 2016 there were only convictions in 17 murders. It said prosecution of the masterminds has not been carried out.

In a report by the Philippines Permanent Delegation to UNESCO in September 2014, it noted that out of the 55 cases linked to media killings from 2003 to 2010, only 10 resulted in convictions.

If there’s something that media organizations can look at positively, it would be the existence of a “community of people who are bonded through loss,” said Jane Worthington, director for program and development of the International Federation for Journalists (IFJ).

She said a new generation of youth seeking justice is “coming through.”

“There’s a beautiful sense of hope here for the future, for this children who are growing up that are now old enough to give their own speeches, to give their own thoughts, so it’s not just the parents anymore,” she said.

“I’m sad that the journalists here won’t see these children grow up but like a lot of people, I have hope that justice will be delivered and we will keep coming back until it is,” she said.

Worthington said there is no simple solution to resolving impunity.

“And the Philippines is right up there with one of the worst records in the world,” she said. (With reports from Robby Joy D. Salveron/davaotoday.com)