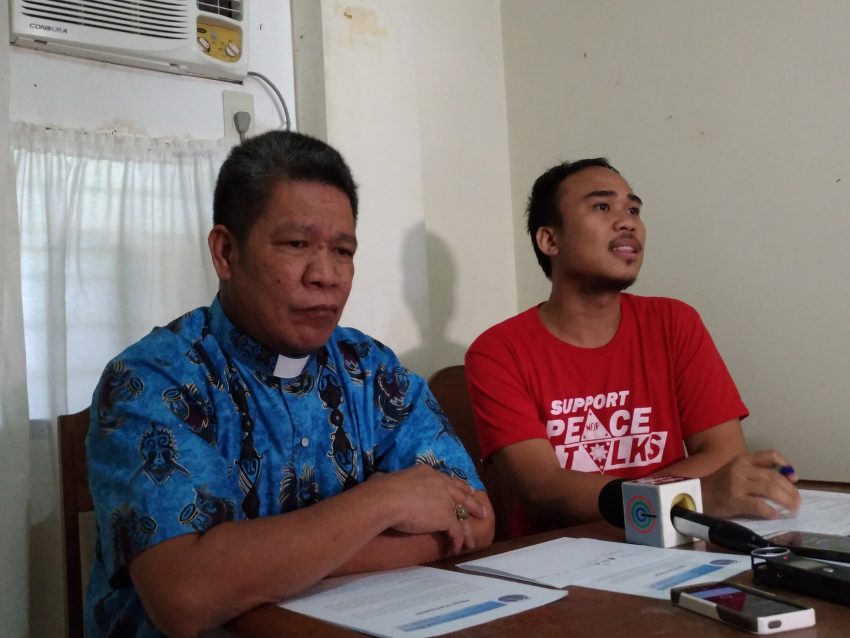 Jay Apiag (right), spokesperson of human rights group Karapatan expresses their concern that the government’s all-out war against the New People’s Army will also target activists in the country in a press conference in Davao City on Monday, Feb. 13, 2017. Beside him is United Church of Christ of the Philippines Bishop Hamuel Tequis. (Zea Io Ming C. Capistrano/davaotoday.com)

DAVAO CITY, Philippines (Updated as of 9:29 pm) – Human rights activists fear for their safety as the government declared an “all out war” against the New People’s Army.

“This has a chilling effect among activists, especially that there are now two cases of political killings in just a span of three days,” Apiag told reporters in a press conference at the United Church of Christ in the Philippines, Haran Monday.

In a phone interview, Sheena Duazo, spokesperson of Bagong Alyansang Makabayan in Southern Mindanao region said they are now preparing affidavits and consulting their lawyers with regard to incidents which they deem are forms of harassment and intimidation against activists.

“A few weeks ago, the office of Kalipunan ng Damayang Mahihirap already reported to us that they have monitored a vehicle that is suspiciously parking regularly outside their office,” she said.

Kadamay is an urban poor organization and a member of Bayan.

Duazo said she herself has monitored that she is being monitored especially after a rally.

She said last Friday, after their rally at the Freedom Park, she noticed a man who was not a member of the press was taking her pictures.

Apiag added they fear that the “trumped up” charges against militant leaders will be revived.

“If they cannot take you in through harassment, surveillance, and tailing, they file charges which are trumped up or worse they resort to killing,” he said.

Apiag said the all-out war does not identify combatants from unarmed activists and civilians. But despite this, Apiag said they will continue to perform their “mandate as human rights defenders.”

In the same press conference, UCCP Bishop Hamuel Tequis, lead convener of Exodus for Justice and Peace said the all out war shows that it is “sacrificing human rights and peace in communities.”

“We cannot deny that these attacks continue the same modus against human rights defenders, community organizers on the grounds of the govenrment’s anti-insurgency. What we see here, as it is with the past, is that the AFP’s all out war is anti-human rights,” he said.

On Wednesday, Feb. 8, Police Superintendent Manuel Gaerlan, regional director of the Police Regional Office 11 said in a press conference that militant groups are propaganda organizations of the Communist Party of the Philippines.

“We don’t want to call them militants because they are really not militants, they are Communists front organizations. They are the mouthpiece of the CPP-NPA so let’s brand them, or call them as Communist propaganda organizations,” Gaerlan said.

Gaerlan, however, pointed out that militant groups in Davao will not be targeted from the government’s ongoing crackdown against the New People’s Army, the armed-wing of CPP, which President Rodrigo Duterte branded as “terrorist.”

“The police is only targeting those who violated the law, I will make this clear. Your police are only enforcers of the law, there is nothing stated in the law where mere membership of the Communist Party of the Philippines is a violation of the law,” Gaerlan said.

He cited the RA 1700 or the Anti-Subversion law which stated that only those who are armed and those who may have violated the law will be subjected to the police operations.

But Duazo said that the PNP’s and AFP’s statement was just a “rehash” anti-communist propaganda line.

“There is nothing new from the PNP and AFP statement. They have been doing this for so long. The Red tagging and vilification against the progressive groups existed in the past administration and now under the Duterte administration,” Duazo said.

The militant leader explained that AFP and PNP were doing this “to justify the unlawful arrests and the spate of unabated political killings against members of the progressive organizations who are bent in campaigning the resumption of the peace talks.”

“Their [AFP and PNP] statement is actually an implied admission that the government’s all-out war declaration against the NPA rebels are also targeting the civilians who are working to expose the truth and advance the genuine peace based on justice,” Duazao said, adding that as if they admitted that they killed political activists.

“It clearly shows that they are really peace spoilers who cleverly designed the peace talks to collapse,” she said.

From February 6 to 8, Karapatan has documented five cases of human rights violations perpetrated by the Army and the police.

On February 6, three days after President Rodrigo Duterte lifted the unilateral ceasefire of the government and announced the termination of the peace talks with the National Democratic Front of the Philippines, NDF P consultant Ariel Arbitrario and labor organizer Roderick Mamuyac were arrested.

Apiag said there was no warrant presented during the initial arrest of the two at around 9 am in a military checkpoint in Toril.

“It was only around 4:00 pm or 5:00 pm when the Criminal Investigation and Detection Group presented a warrant,” he said.

Apiag also said Arbitrario is still a JASIG protected person even if the government cancelled the Joint Agreement on Safety and Immunity Guarantees which gives protection to persons identified by the government and the NDFP as having roles in the peace process.

He said the JASIG termination should only effect after 30 days since the written notice was sent to the other party. Arbitrario is currently detained at the Compostela Valley Provincial Rehabilitation Center in Tagum City.

On the same day, former Bayan Muna coordinator Glenn Ramos was killed inside their house in Maa here. The Army said Ramos is an “NPA supply officer”. However, Apiag said the family and Ramos’ employer attested that he is a construction worker.

“The entire AFP story is dubious and sounds like all the ‘nanlaban’ stories of the PNP of the past few months,” said the CPP.

“The AFP accuses Ramos of being an NPA member. The military claims they were serving a warrant for Ramos’ arrest when a firefight broke out after he supposedly “refused to submit himself and drew a weapon.” Ramos died after sustaining two gunshot wounds,” it added.

Apiag also said that the killing of purok leader Emelito Rotimas in Barangay Lapu-lapu in Maco, Compostela Valley province is a case of political killing.

“He is actively involved in the establishment of a local Lumad school,” he said. (With a report from Marlo Joshua Brua/davaotoday.com)