DAVAO CITY, Philippines – During the Global Day of Action on the first day of the 45th session of the United Nations Human Rights Council (UNHRC) Monday, human rights workers and advocates joined the online action by raising concerns of unsolved killings in the region.

The global action drew the support of around 700 rights groups and advocates urging the UN council to act on the recent report of UN High Commissioner for Human Rights Michelle Bachelet of “widespread and systematic” human rights violations in the country.

Rights advocates here said there is an urgency to conduct an independent investigation on the spate of killings, especially among community rights defenders as the government intensified its anti-insurgency campaign.

“At the onset of Duterte’s version of counter-insurgency plan, Oplan Kapayapaan, now Oplan Kapanatagan, the assassination of prominent activist-leaders in the region has heightened, and this includes Jimmy Saypan and other members of Compostela Farmers Association who fell prey of Duterte’s fascist policy,” said Jay Apiag, secretary general of Karapatan Southern Mindanao Region.

Saypan was secretary general of the Compostela Farmers Association and was murdered on October 10, 2016 for leading the group’s resistance against a mining company.

Karapatan also noted the murder of a Lumad student in Talaingod, Obello Bay-ao in 2018, committed by a paramilitary member.

Some of the victims had supported Duterte’s bid for the presidency in 2016 after seeing his support to their cause as mayor of Davao, said Apiag, But all this changed when Duterte declared Martial Law in Mindanao and threatened to bomb Lumad schools.

“This and many other cases of killings in the region oblige us to join the global call for the UNHRC to conduct an independent investigation on the killings in the Philippines,” he added.

A total of 98 were killed in Davao region since Duterte came into power, according to Karapatan SMR’s records. 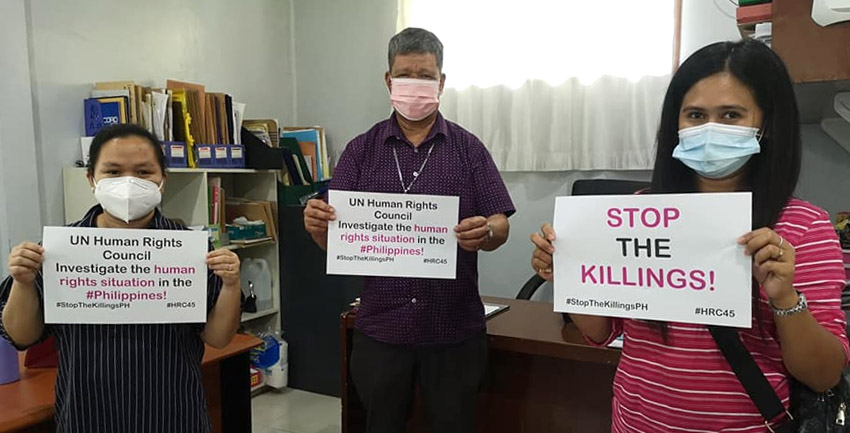 Church ministers and activists in Davao City hold out placards urging the UNHRC to investigate the human rights situation in the Philippines.during the Global Day of Action on September 14 (Photo from Karapatan SMR)

In the statement, the groups in Davao noted that mechanisms like inter-agency task forces and fact-finding commissions “promising to act without fear or favor” failed to hold perpetrators of the murders accountable.

“We repeatedly have been frustrated and even enraged by the fruitlessness and ineffectiveness of these so-called domestic accountability measures,” the groups said.

“Rather than helping us, these government bodies have even contributed to the infrastructure of impunity and miscarriage of justice against the victims of human rights violations,” they added, noting that some government agencies have supported the vilification campaign of the government’s anti-communist task force against Lumad evacuees and advocates.

During the online global protest, international rights advocates gave solidarity messages, including UN Special Rapporteurs Agnes Callamard (on extrajudicial, summary or arbitrary killings), Diego Garcia Sayan (on independence of judges and lawyers), David Boyd (on human rights and the environment), and Mary Lawlor (on the situation of human rights defenders). Three members of the European Parliament and legislators from Australia urged their respective governments to probe on the human rights violations in the Philippines.