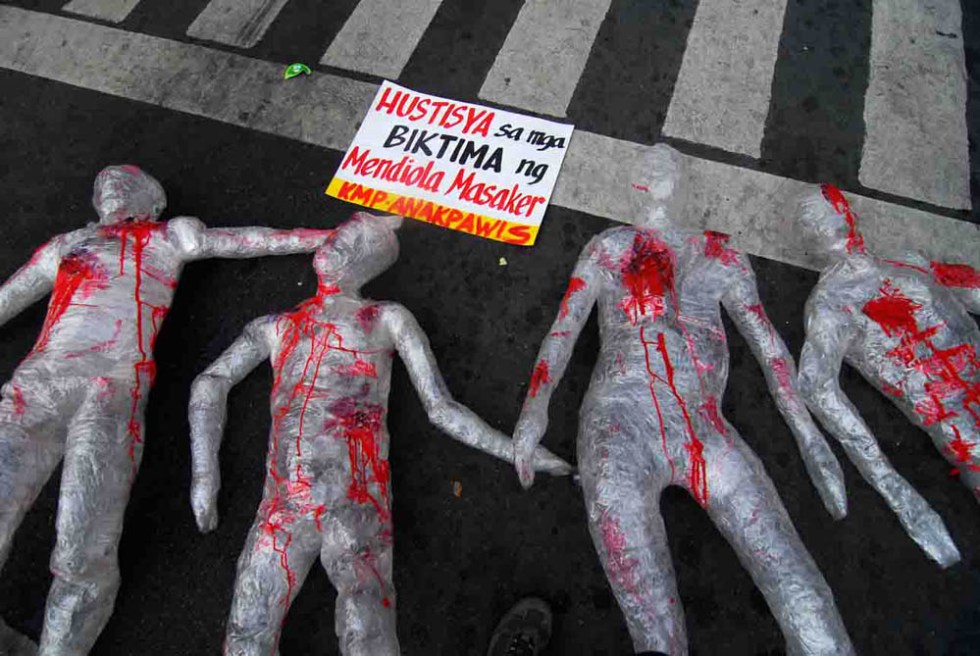 DAVAO CITY, Philippines – The Kilusang Magbubukid ng Pilipinas (KMP) marked on Monday, January 22, the 31st year since the killings of some 13 farmers in an event now known as the Mendiola massacre.

KMP, along with other groups, protested at Mendiola Street near Malacañang, the exact place where the incident took place in 1987.

There were also similar protests held across the country, among them in front of the Department of Agrarian Reform – Davao del Norte Provincial Office in Tagum City.

The protesters did not only remember the martyrs of the said massacre. They also criticized the Aquino administration’s implementation of the “void” Comprehensive Agrarian Reform Program (CARP), and the political killings during President Duterte’s term.

“Farmers declare the ruling Duterte presidency as an enemy of the people and the peasant masses. We cannot allow Duterte to have his way and continue the massacre of farmers through political killings and burdensome economic policies,” KMP said in a statement.

On January 20, James Flores, 33, was shot multiple times to death by an unidentified gunman near a mall in Tagum at around 6 pm, according to KMP.

Flores was only tying his groceries to his single motorcycle parked at the back of Gaisano Mall in Tagum when an unidentified man approached and fired at him.

This came after a report by KMP in Northern Mindanao (KMP-NMR) that revealed that another peasant was killed at around 4:30 in the afternoon on Monday, January 22.

The victim was Anecito Lopez Jr., 55 years old, and secretary-general of Kahugpungan sa mga Mag-uuma (KASAMA) in Bukidnon, a local chapter of KMP-NMR. He was killed by an unidentified assailant at Purok 3, Daitan in Quezon, Bukidnon.

On January 15, the beaten body of 25-year-old Aaron Notarte with two gunshot wounds was found at the Dollete Funeral Homes in Trento, Agusan del Sur, according to Karapatan.

Notarte’s body was brought by the elements of 75th Infantry Battalion of the Philippine Army, where they claimed that he was a member of the New People’s Army killed in an encounter with troops at Area 69, Brgy. Imelda, Bunawan, Agusan del Sur on the night of January 14th.

He was said to be possessing 2 AK rifles during the reported encounter.

But Notarte’s employer said that the only possession he had was a P10,000-worth cash advance the night he left for work to buy groceries for her mother. The money could no longer be traced, Karapatan said.

Aaron was living with his sickly mother, Erlinda Notarte, 62, who cried that his son was a “hardworking chainsaw operator only and not an NPA,” before the body.

In a phone interview with Davao Today, Eufamia Cullamant, the chairperson of Kahugpungan sa mga Lumadnong Organisasyon (KASALO) said Notarte’s death is the 10th of extrajudicial killings in Caraga Region alone since martial law was extended in Mindanao. (davaotoday.com)