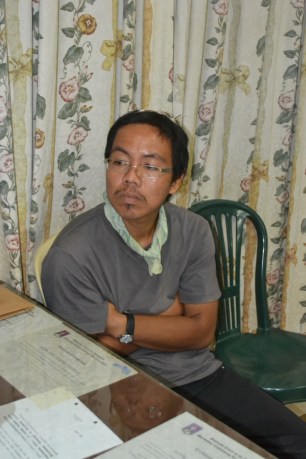 Lt. Colonel Krishnamurti Mortela, commander of the 67th Infantry Battalion Commanding Officer said in a statement that “Gargar was captured by the troops who were pursuing the rebels after a firefight in (Barangay) Aliwagwag, (Cateel, Davao Oriental).”

He said troops pursuing the guerrillas found Gargar “wounded” and “unconscious while clutching a rifle 200 meters away from the encounter site”.

“An M16 rifle, landmines and subversive documents were recovered from him,” Mortela added.

The troops brought Gargar to the Davao Oriental provincial hospital for treatment, the statement further said.

The statement further alleged that Gargar joined the NPA in Compostela Valley in 2012, after spending years teaching in UP Diliman from 2000 to 2003 then in various universities in Manila and Cagayan de Oro.

The statement further said that Gargar, while studying for a doctorate degree in Netherlands, “helped CPP (Communist Party of the Philippines)-NPA founder Joma Sison in the production of several books aimed to exploiting the countryside”.

While the AFP Eastern Mindanao Command Commander Lt. Gen. Ricardo Rainier Cruz III said that their handling of “Gargar is an example of how soldiers value and respect human rights”, he would still be charged with violation of Republic Act 9516 or “An Act Imposing Stiffer Penalties for Certain Violations of Illegal/Unlawful Possession of Explosives”, another two cases of attempted murder and violation of the Comelec gun ban.

Gargar’s lawyer, Atty. Joel Mahinay from the Union of Peoples’ Lawyers in Mindanao, said the charges “are fabrications heaped on Gargar by the military after their encounter with the NPA.”

Mahinay said Gargar explained that the reported encounter between the NPA and government troops in Aliwagwag last Monday happened “1.5 kilometers away from where he was found by the soldiers.”

“Gargar was conducting a scientific study on the impact of Typhoon Pablo in that area, which is intended to help in the rehabilitation and reforestation plans for Davao Oriental by Balsa Mindanao,” Mahinay added.

Meanwhile, the scientists group AGHAM  (Samahan ng Nagtataguyod ng Agham at Teknolohiya Para sa Sambayanan or Advocates of Science and Technology for the People), in which Gargar is a member, released a statement condemning the arrest and charges.

“We condemn the illegal detention and harassment of Kim.  He should be freed immediately as his arrest and detention is illegal,” said AGHAM President and UP Diliman Professor Giovanni Tapang.

AGHAM’s statement posted on its Facebook page detailed Gargar’s involvement in various investigations on environment issues across the country.

“As a volunteer scientist of AGHAM, (Gargar) has been involved in various activities concerning people’s welfare. He took part in many investigative missions such as the impacts of monocrop cassava plantation in Isabela, flood monitoring in Buwaya River and technical review of the Philex mine tailings spill. His recent work on typhoon Pablo research led him to go to Eastern Mindanao for a comprehensive assessment of the affected areas. Despite sterling credentials in the Academe, he chose to make use of his knowledge and expertise not for his own personal gain but for the benefit of the marginalized people.” The post read.

Tapang said Gargar was a PhD student at Groningden (Netherlands) in Chronobiology and taught in UP Diliman and Mapua Institute of Technology. (davaotoday.com)