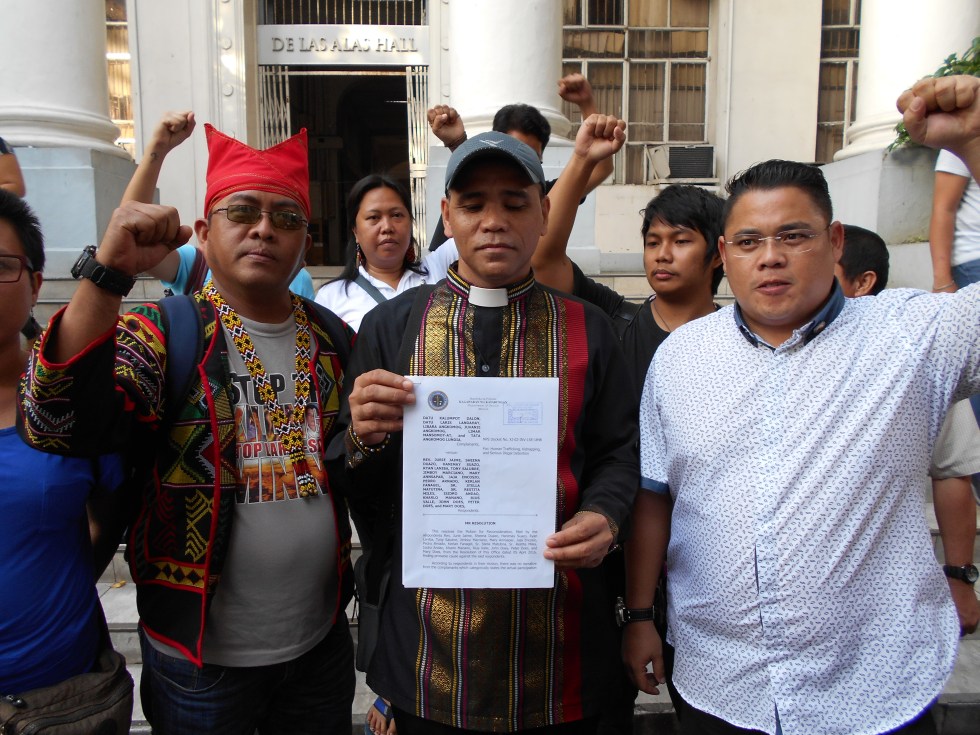 CASE DISMISSED. Activists who were accused of kidnapping indigenous people evacuees in Davao City are elated with the decision of the Department of Justice to dismiss their case on Monday afternoon at the DOJ office in Manila. Reverend Jurie Jaime, convenor of the Exodus for Justice and Peace, holds the copy of the DOJ resolution. He is flanked by Kerlan Fanagel, chairperson of the Pasaka Confederation of Lumad Organizations in Southern Mindanao (on the left) and Anakpawis Partylist Rep. Ariel Casilao. Also in the photo are Mary Ann Sapar of Gabriela Davao and Rius Valle of Children’s Rehabilitation Center. (Contributed photo)

The DOJ resolution dismissed the kidnapping and serious illegal detention charges against the activists who were accused of forcibly holding the indigenous peoples evacuees inside the United Church of Christ in the Philippines Haran compound in Father Selga Street, here.

The ruling came three days after the camp of the defendants met with Department of Justice Secretary Atty. Vitaliano Aguirre in Manila on Friday, July 15. The defendants also submitted to the DOJ Secretary the affidavits of recantation and desistance of the complainants who were reportedly forced to file charges against the activists.

Sheena Duazo, spokesperson of Bagong Alyansang Makabayan who is one of the accused, said the DOJ released the resolution around 5:00 pm, Monday.

Duazo told Davao Today in a phone interview that nine of the 15 accused received the resolution together with Makabayan bloc representatives, Rep. Carlos Zarate of Bayan Muna Partylist and Rep. Ariel Casilao of Anakpawis Partylist.

“We are thankful for this favorable and speedy resolution of the case,” Duazo said.

Duazo said the DOJ resolution shows that the charges against them are “baseless” and were only meant to threaten the groups who are supporting the Lumad.

She said that they are planning to file counter charges against those who “forced” the complainants to file the case against them.

“Apparently the complainants were forced by the military and paramilitary members to file a case against us,” she said.

Duazo said they will also urge President Rodrigo Duterte to pull out military troops from the indigenous people’s schools and communities on the day of the first State of the Nation Address in Manila “so that thousands of Lumad evacuees in Mindanao can return back to their communities.” (davaotoday.com)