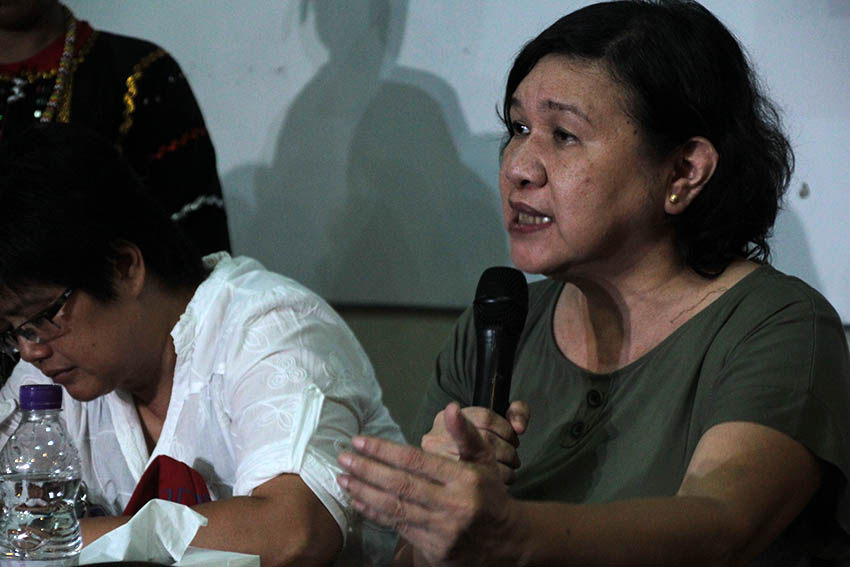 QUEZON CITY, Philippines — Former partylist lawmakers here said that Wednesday’s violent dispersal of a protest action at the US Embassy, despite lacking permits, should not have been violently dispersed.

“In their own press conference, they [police] said that the rally had no permit. Does it say anywhere in the Public Assembly Act that in the absence of a permit, you can violently disperse them? No, it doesn’t. That’s prohibited,” said Neri Colmenares, former Bayan Muna representative and vice chairperson of the Makabayan Coalition in a press conference here on Thursday, October 20.

“In fact, this has been debated in the Supreme Court, and ruled against the calibrated preemptive response,” Colmenares said.

Over 50 were hurt in a violent clash that erupted between the members of the Manila Police District and the side of the protesters composed mostly of indigenous and Moro people calling for an end to the presence and influence of the United States in the country.

A van driven by PO3 Franklin Kho rammed through protesters.

MPD Deputy Director for operations Sr. Supt. Marcelino Pedrozo and Kho, along with several other police, were relieved and placed under administrative custody of the National Capital Region Police Office pending investigation.

Kho has claimed that he “panicked” and only wanted to protect his vehicles from the protesters whom he alleged were tryingn to take the vehicle.

Kho said that he was afraid the damage to the vehicle would be charged to his pay.

“It was clear that the actions of Col. Pedrozo and the police were premeditated. It was clear in the video. He said, even without provocation the rally must be dispersed because we will lose face with the embassy,” Colmenares said.

In a video released by GMA News, Pedrozo was recorded telling his officers to disperse the protest and nab the protesters or else they will lose face with the US embassy.

“You have not even captured anyone, there are so many of you. If there is violence then so be it. We are the police. Are we just going to lose to them? We are going to lose face with the embassy. You have to disperse them. Fight back,” Pedrozo said in the video.

Organizers said that the program was about to finish when the order for the dispersal came.

“This should have no place in the Duterte government,” Maza said.

“On June 30 during his inauguration, if you remember, we were outside the gates of Malacañang. But we were let in as a gesture that the right of the citizens to expression and protest was to be respected,” Maza said.

Maza added that the violent dispersal disrespected the President’s pronouncements to have an independent foreign policy.

“It was clear that they disobeyed the pronouncements, because who did the police first consider? Was it the interest of the country or the interest of America that lies within the US Embassy?” Maza said.

“In my opinion, whether you are working inside or outside the government, what happened [in the US Embassy] can never be acceptable,” she said. (davaotoday.com)