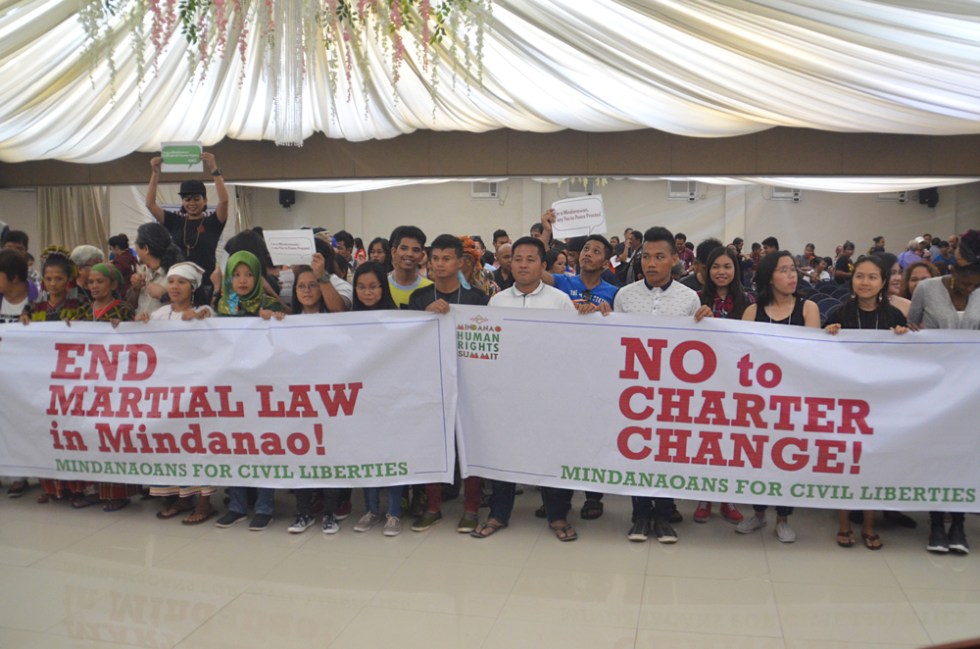 At least 500 human rights advocates, religious institutions, Moro, indigenous peoples and victims of rights abuses gathered to express their grievances as they pressed on the lifting of the martial law during the 7th Mindanao Human Rights Summit held on February 23-24, 2018 in Davao City. (Mark Joy G. Basallajes/davaotoday.com)

DAVAO CITY, Philippines – Church-based and cause-oriented groups in Mindanao reiterated their opposition to the extension of Martial Law in the island owing to the rising cases of human rights violations and extrajudicial killings particularly targeting the peasant and Lumad communities.

The year-long implementation of martial law in Mindanao has exacerbated the extrajudicial killings (EJK) and cases of human rights violations according to these groups which formed the Mindanaoans for Civil Liberties (M4CL), a broad coalition that upholds human rights and civil liberties, during the 7th Mindanao Human Rights Summit held here on February 23-24.

At least 500 human rights advocates, religious institutions, Moro, indigenous peoples and victims of rights abuses gathered to express their grievances as they pressed on the lifting of the martial law.

On February 6, the Supreme Court upheld the extension of martial law until December 31 this year.

Sr. Rowena Pineda of the Sisters Association of Mindanao (Samin) urged the government to lift the martial law which the nun termed as “senseless, unnecessary and baseless.”

Rev. Dan Pantoja of the Peacebuilders Community, Inc. said they are alarmed by the spate of killings in Mindanao especially among peasant and indigenous peoples, the Lumad, in Mindanao.

The coalition disclosed that human rights group Karapatan has recorded 126 cases of extrajudicial killings, excluding the victims of the war on drugs, 428 cases of fabricated charges and forcible evacuation of Moro and Lumad communities due to military operations.

“The problem is we expect the Armed Forces of the Philippines (AFP) to protect the civilians but it turns out those civilian communities are afraid of them,” Pantoja said.

He said that indigenous peoples are the most vulnerable since they were killed to satiate the greed of multinational corporations in acquiring the resources found in the ancestral domains of the Lumad.

Victims of rights abuses shared their horrible experiences in the hands of mostly the government troops.

Lita Wali of T’boli-Dulangan Manobo tribe in Barangay Ned, Lake Sebu in South Cotabato told the summit participants of the killings of the eight members of their tribe including their leader Datu Victor Danyan on December 3 last year. Wali is a survivor of the massacre allegedly perpetrated by the 27th Infantry Battalion.

Wali claimed that their community has been targeted due to Datu Victor’s opposition against the coffee plantation of the Consunji company in their ancestral land.

Wali quoting Datu Victor said, “regardless of the cash they (Consunji) will give us, we will not accept it. Our land is for our children and their children’s children.”

Students from Alternative Learning Center for Agricultural and Livelihood Development (Alcadev) in Caraga region told their story of frequent disruptions whenever there are military operations in their areas. Alcadev is one of the alternative schools established for the Lumad in Mindanao.

One of the Alcadev students recalled the dinner they had with President Rodrigo Duterte who promised to bring them home. But she couldn’t believe Duterte said their schools will be bombed and said, “Our teachers and leaders are facing false charges.” While she asked, “Why can’t they see our schools are teaching us how to read, write and plant?”

Aida Ibrahim, the spokesperson of Tindeg Ranao which is a group of displaced Marawi residents, criticized the extended martial law amid the declaration of the government that the crisis in Marawi has ended. Ibrahim said martial law has suppressed the demands for sustainable rehabilitation and their immediate return to their residences in the city that has gone to ruins.

Ibrahim also said the military has declared 24 barangays in Marawi City as “ground zero” whose residents are taking refuge in cramped temporary shelters in Iligan City and in the towns of Balo-i and Saguiran in Lanao del Sur.

“There is lack of support from the government in terms of food and other assistance two months after the government declared Marawi free from terror,” Ibrahim said.

In a statement, the M4CL demanded for the resumption of peace talks with the Communist Party of the Philippines (CPP)-National Democratic Front (NDF)-New People’s Army (NPA) and the Government of the Republic of the Philippines (GRP) to end hostilities including the rampant violations on peoples’ rights after Duterte has tagged the NPA fighters as terrorists and ordered the arrests of political activists.

The renewed campaign against illegal drugs, according to M4CL, is an extensive violation of the rights to life and due process among the poor who were targeted in the first two waves of Duterte’s war on drugs where more than 13,000 were killed.

The coalition vowed to continue its call for the lifting of martial law as Duterte keeps on flaunting his tyrannical rule in the country in his less than two years of governance. (davaotoday.com)