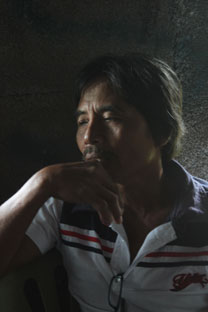 IN DEBT. Carlos Anacleto shares how lack of government support forced them to go to traders or money-lenders and incur heavy debts. (davaotoday.com photo by Medel V. Hernani)

Usurious schemes and failure of the government to support farmers bury them in a vicious debt cycle.  Farmers are left fending for themselves.

Farmers are under the mercy of traders and government credit institutions.  The Department of Agriculture’s budget for 2012 nationwide is at PHP 53.7 billion (USD 1.25 billion).  In rough estimates by the Kilusang Magbubukid ng Pilipinas, the pie puts the subsidy of only PHP 281 (USD 6.52) per hectare for rice and PHP 5.10 (USD 0.12) per hectare for corn.

Without state support for their basic production needs, farmers turn to traders and money-lenders for credit.  Farmers spend for seeds, fertilizers, pesticides and tools — expenses involved in harvesting and processing crops and even irrigation.

Traders or “ahente” (agents) were already present in the person of one Raymundo Galindo.  He started with around 800 farmer-borrowers and rose to 2,000 spreading in five barangays here.  He gets 70 percent of the farmers’ income.

Anacleto, chairperson of the Arakan Progressive Peasant Organization (Appo), cited how a national program and a national agency like the Quedan and Rural Credit Guarantee Corporation (Quedancor) is used by traders to extract more profit. Quedancor entered Arakan in 2002.

According to its website, Quedancor’s mandate is to accelerate the flow of investments and credit resources into the countryside so as to trigger the vigorous growth and development of rural productivity, employment and enterprises to generate more livelihood and income opportunities through the various quedan credit and guarantee programs.

Fertilizers are purchased cheap by Quedancor but are sold to farmers using a charge-to-crop scheme, with interest payable after harvest.

It is not enough for farmers to get credit from only one trader as others have pending balances.  For example, if a farmer enters into the charge-to-crop scheme from Quedancor to procure seeds and fertilizers, the farmer may need to loan from other traders to finance for land preparation and other expenses.

Thus farmers are hit threefold by credit: first during the procurement of seeds and fertilizers in the charge-to-crop scheme, second on the credit they acquire from traders for other expenses in production and third in the dictate of price by traders.  This is called by farmers as “usura” or usury.

Land-preparation usually takes two months for a two-hectare farm lot.  It must be done from January to March as rain comes on March or April and will damage the crops.  In order to prepare a two-hectare lot, a farmer needs to hire three carabaos (at PHP 15o or USD 3.48 per carabao per day) to plow, nine people to “pugas” or plant (at PHP 100 or USD 2.32 per person per day) a bag of yellow corn weighing 18 kilos or white corn (30B29) weighing 16.6 kilos.  Farmers also have to spend on maintenance like “limpisa” (weeding) wherein 10 people (at PHP 100 per person per day) are hired once or twice in a cropping.

Farmers go to traders to ask for more credit for maintenance cost and are sometimes charged 1o-15 percent interest.  They have to spend again for harvest expenses.

Traders also charge PHP 15 (USD 0.35) per sack to farmers but do not return these sacks afterwards.  Traders deduct PHP 1 (USD 0.02) per kilo for resiko (waste), arbitrarily alter readings of the weighing scales and impose classification in weighing corn with no basis.

Their expenses reach to about PHP 28,000 (USD 649.55) in the average.  Thus farmers’ expenses are higher than their earnings most of the time or gain barely enough to survive for the next cropping, putting them deeper into the debt cycle.

These schemes of traders have been the subject of protest actions from farmers in different forms including lobbying with the local government.  Their protests culminated in a dialogue with traders, the municipal government of Arakan and the Department of Interior and Local Government.

The farmers demanded the removal of the PHP 1 deduction, investigation of the anomalous weighing, clearer classification of product damages, and to give back to farmers the used sacks.

Traders did not agree because they will be at the losing end.  “Wala sila’y tubag kay alkanse daw sila kung mao to ang subayon.  Naghimo’g lakang ang SB, giadto nila ang Bukidnon, balik man ang sako, sa Roxas side balik man didto.  Ang Arakan lang jud ang wala.  Ang gusto unta nato ang SB mismo maghimo og resolusyon pero di man sila magpasalig kay gunit man pud sila sa negosyante.  (They did not have a response because they said they will lose if that (the demands) would be imposed.  The Sangguniang Bayan or SB (Municipal Council) made a move, they went to Bukidnon and Roxas and found out that the sacks in those areas were returned to the farmers but not in Arakan.  What we want is for the SB to create a resolution but they can’t pledge on it because they are also controlled by the businessmen).”

This usurious schemes and the failure of the government to support farmers buries them in a vicious debt cycle.  Farmers are left fending for themselves.

“Ang mag-uuma natali na jud sa pinanser o trader tungod sa utang.  Mao na mobuhi nalang gani ug hayop aron naay ikabaligya o ikonsumo pero utangon gihapon.  Bisan naay yuta, mapugos gihapon mang-hornal (The farmer is tied to financiers and traders because of debts.  That is the reason why farmers raise livestock which they can later sell or for their consumption, but they also got that from a loan.  Even if farmers have land, they are still forced to do farmwork to sustain their daily needs),” Anacleto said.  (John Rizle L. Saligumba/davaotoday.com)