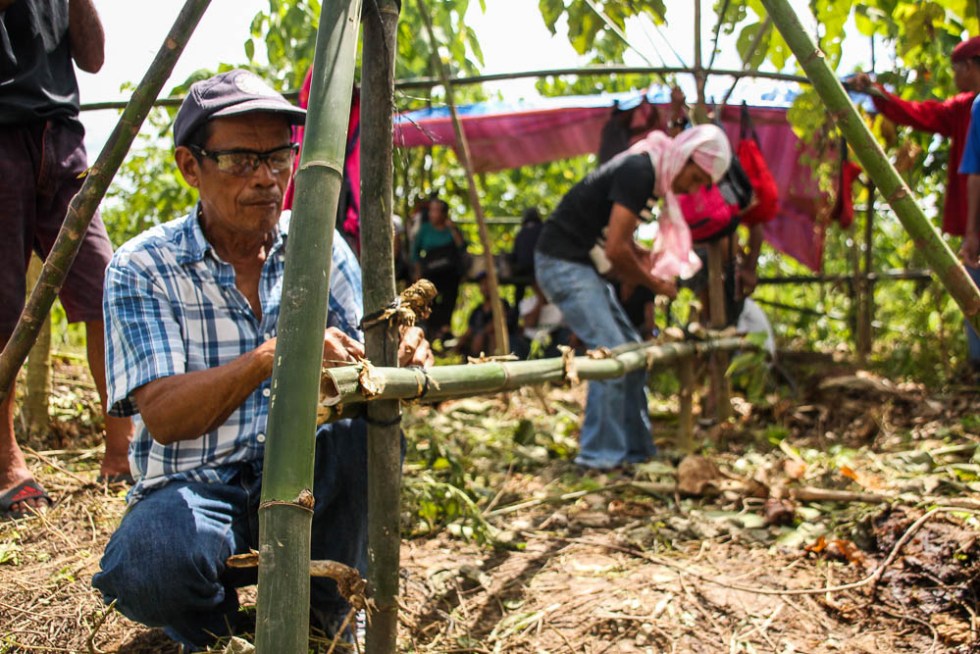 LAND OCCUPATION. Not minding the heat of the sun, farm workers help in mounting the tents for the 46 GMARBAI II agrarian reform beneficiaries as they marked the first day of tenancy of the reclaimed land in Tagum City. (Cy Bermudez/davaotoday.com)

DAVAO DEL NORTE, Philippines – After decades of waiting and struggling to own their lands, 46 farmers occupied peacefully a land area covering 34.6 hectares in Tagum City on January 26.

“We are elated to claim back our land which we had long been fighting for more than 20 years now,” said Rene Lomongo, chairperson of Nagkahiusang Agrarian Reform Beneficiaries Association, Inc. (NARBAI).

Lomongo explained that they decided to occupy the area, located at Purok 28B, Timog Kawayanan, Barangay Madaum in Tagum City, after a memorandum of agreement (MOA) was signed by agrarian reform beneficiaries with Department of Agrarian Reform (DAR) Secretary John Castriciones and Assistant Secretary Luis Meinrado Pangulayan in Quezon City last year.

The MOA came following pressures from the agrarian reform beneficiary leaders who trooped and foisted a protest camp at the DAR national office between September to December last year. The MOA “mandates to give the farmers the permit to claim the land that is rightfully theirs under the Comprehensive Agrarian Reform Program (CARP),” said Lomongo.

The farmer beneficiaries were members and families formed under the Hijo Agrarian Reform Beneficiary Association, Inc. (HARBCO) who tilled the banana farmland plantation owned by the Hijo Resources Company (HRC).

HRC pioneered the cultivation and export of Japan-bound Cavendish bananas in 1959. It had two major shareholders: the Tuason Group and Fuji Fruits Co., Ltd of Japan.

With the implementation of CARP (Comprehensive Agrarian Reform Program) in 1988, a total of more than 126 hectares were awarded to HARBCO on December 16, 1996, granting Certificate of Land Ownership Awards (CLOAs) to 148 agrarian reform beneficiaries (ARBs). 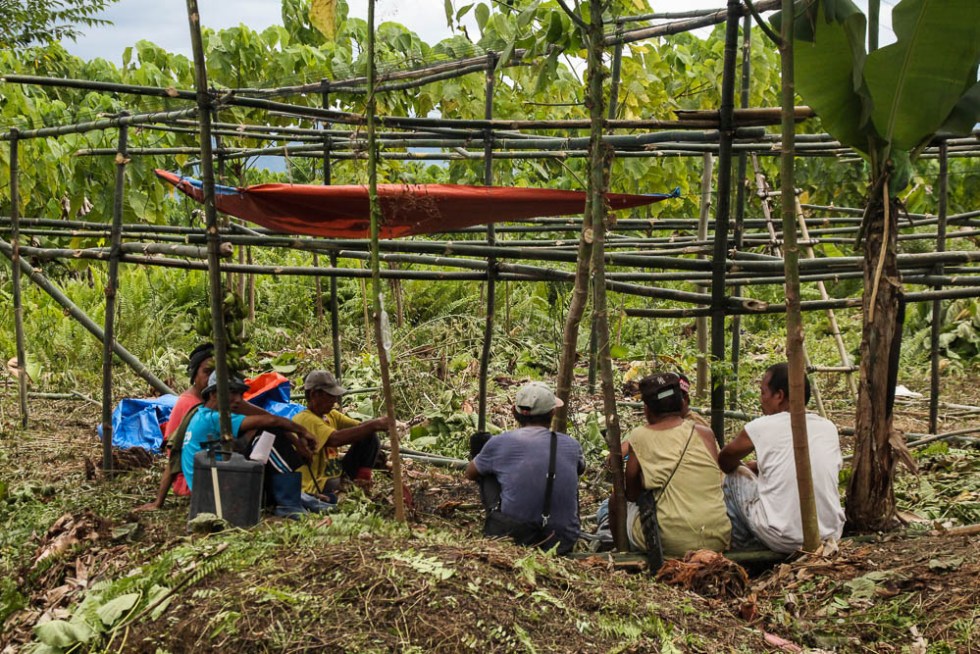 Under the law, the public and private agricultural lands were redistributed to qualified farmers and workers in that particular area, regardless of the “tenurial” arrangement. Each farmer was given a Certificate of Land Ownership Award or CLOA for their new property.

The CARP law states that through cooperatives and associations, it is possible for ARBs to ink deals on lease or growers’ agreements such as AVAs with private corporations or business up to 25 years.

Lapanday had AVAs with various cooperatives covering more than 6,000 hectares of lands in Mindanao. LFC is owned by the prominent Lorenzo Family and a leader in the export-quality supplier of Cavendish bananas to the international markets with over 30 years of experience in the field.

In 2008, the farmers began protesting against LFC management being “paid under minimum wage, with salary delayed or frozen salaries, and not given bonus even if they are required to work more than the regular duty hours.”

He said the LFC management gathered the workers on the evening of December 24, 2008 to give them all the pending payments if they sign the General Framework and Farm Holdings (GFFH) and Agribusiness Ventures Agreement (AVA).

Both documents were said to “improve their lives.” In a short explanation to farm workers on the two documents with over 50 pages each, the GFFH was said to contain guidelines on plantation system improvements as well as added farmer shares on the total banana production.

More than 100 farmers refused to sign the document and decided to disassociate with HARBCO and formed another group, the Gawasnung Mag-uuma Agrarian Reform Beneficiaries Association or GMARBAI. 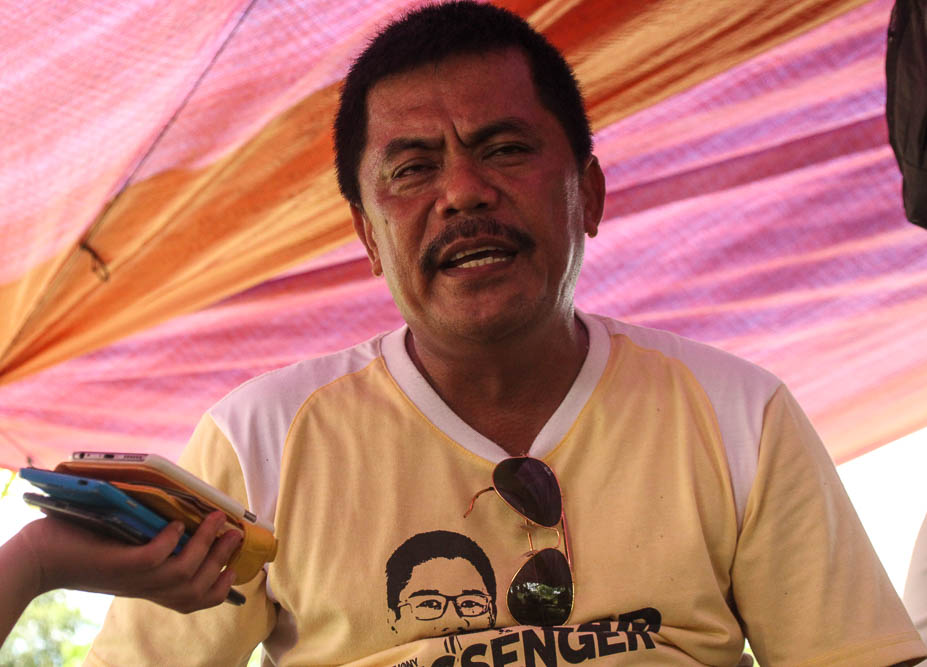 On January 2, 2009, they were barred by the management from entering the premises of the LFC land-holdings and denied their rights as ARBs.

They then filed a case on Illegal Detention and Wage and Hour violation before the National Labor Relations Commission (NLRC).

They won the case which enabled them to return to formerly LFC farmlands and demand for their back pay.

However, they could not sustain the need for maintaining the banana plantation operations with business owners refusing to buy their products. They have engaged into other sources of income to provide for their families.

In 2016, GMARBAI organized themselves with other agrarian reform beneficiaries under the AOM. Later, they organized the NARBAI as a new organization.

Billy Cabintoy, secretary-general of AOM, told Davao Today that the AOM hopes to help its members to cultivate the farms and seek help for support services.

He said they are wary that the Lorenzos will continue to threaten the farmers following the successful land occupation made by the GMARBAI and now NARBAI.

This statement came after Cabintoy confirmed that police officers allegedly sent by HARBCO came on Friday afternoon questioning their entry in the land premises. Cabintoy said they learned the police officers were prodded by the LFC management.

“This is not new to us. The landlords like Lapanday are willing to do anything to take us out. But we know very well of our rights,” said Cabintoy. (davaotoday.com)