Jay Ann still holds a slight hope that Regie and the other 36 crew members might still be alive. But they realized they had to unite and find ways to push agencies and officials to act to search for their loved ones. 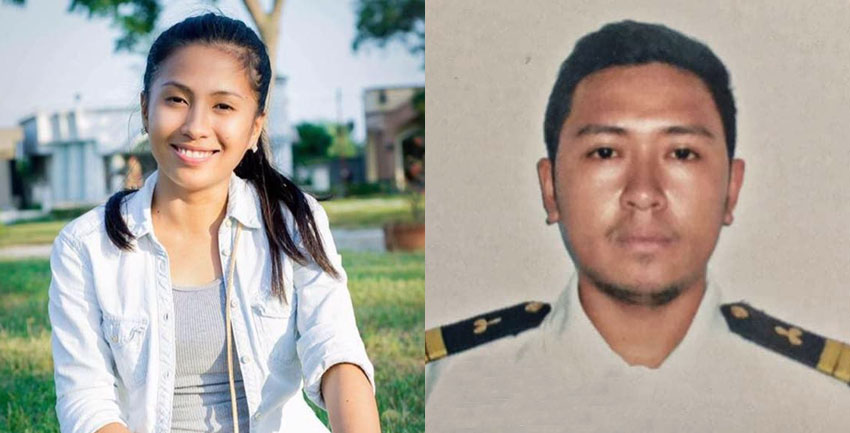 DAVAO CITY, Philippines – “He was telling me about their last trip, his last message was about facing heavy rain and strong winds.”

Jay Ann Cabilao recalled the last message sent by her fiancé, Regie Sedillo, a Davawenyo and one of the 36 missing crew of MV Gulf Livestock 1 sank in the waters of Southwest Japan when Typhoon Maysak struck last September 2.

The freighter was ferrying 6,000 cattle from Napier, New Zealand to Tangshan, China but went missing in the waters of Amami Oshima Island.

The ship was built in 2002 as the feeder containership Cetus J and converted to a livestock carrier called Rahmeh in 2015. It was renamed again in 2019 as Gulf Livestock Carrier 1 in April 2019.

In July, the ship has lost propulsion off Balut Island and was assisted by the Philippine Navy.

Sedillo, the machine engineer of the Panama-registered ship, was able to send his last text early in the morning of that day.

“I remember telling him to get his things ready all the time and to keep praying for their safety,” Jay Ann said.

Regie planned to marry Jay Ann at the end of his contract to the shipping line on February 2021, and Jay Ann had started processing documents and preparing for their dream wedding.

“That was the initial plan that we have. While he is away, I’ll start to sort out things here,” she said.

Jay Ann still holds a slight hope that Regie and the other 36 crew members might still be alive. But they realized they had to their efforts to get agencies working to find their loved ones.

In the first few days after the incident, Jay Ann and the families of the other crew would only rely on updates through the news.

the families’ need to communicate with the Japan Coast Guard.

Neither did the companies facilitate them to approach government agencies that may help them coordinate with the Japanese government.

“We were the ones who reached out to his employer and ask for help but they always say there are no updates from Japan yet and just wait,” she added.

It was all their personal efforts to find connections about the ongoing search and rescue operation of their loved ones. Jay Ann wrote to the office of Mayor Sara Duterte-Carpio asking for help.

This week, Labor Secretary Silvestre Bello III announced that three countries have responded to his letter of request and committed to helping the search operation.

Bello sent requests to Korea, China, and Taiwan last week upon the petition of the families to continue to search operation.

The families also launched an online signature campaign on Change.Org and started a Facebook page asking for the search operations to resume. They also urge the companies to send resources to help expand the search and rescue operation.

The families have asked the Gulf Navigation Holding to deploy private search party operations in the East China Sea waters or employ a team of professional divers to the area where the black box of the ship is sending signals.

Jay Ann and the other families are still hoping to find survivors in the missing ship after two other Filipino crew members were rescued and came home safely.

The accounts of the survivors gave them hope as they said three lift rafts from the vessel were still missing and uninhabited islands nearby are still unaccounted.

There have been no sightings of any other dead bodies since the Japan coast guard resume its mission of normal patrol schedule on September 9.

“I am certain that he is still alive and maybe because of the trauma he experienced it’s difficult for him to ask for help,” Jay Ann said. (davaotoday.com)