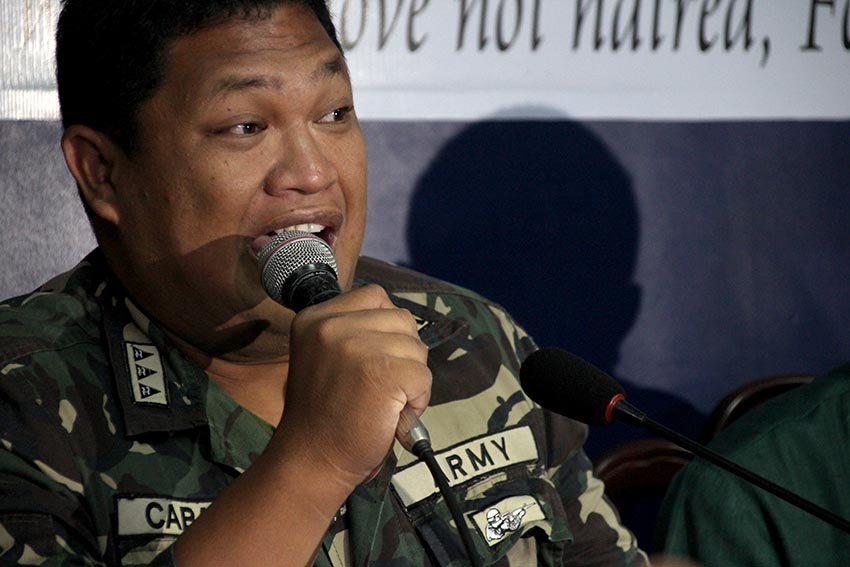 Army spokesman Capt. Alexander Cabales maintained that no formal charge has been filed against them regarding cases of human rights violations since Martial Law was declared a month ago.

Cabales said it is now the responsibility of the complainants to file appropriate charges, instead of taking it to the streets.

(They have so many issues written on streamers they psoted there in the protest camp. But sad to say, they have not filed a single complaint in our office to complain of any wrongdoing a soldier has made. They have not gone to the police or any other agency that can give justice to their allegations.)

Cabales was referring to the protest camp of Lumad students and parents set up along the highway of Panacan, directly outside the gates of the Department Public Works and Highways Warehouse.

The students, along with their teachers evacuated after a Lumad school, the Salugpongan Ta Tano Igkanogon Community Learning Center in Sitio Nasilaban, Talaingod Davao Del Norte was reportedly fired upon by a Citizen Armed Force Geographical Unit personnel.

In response, Save Our Schools spokesperson Rius Valle countered that scared, the disappeared, and even dead victims usually don’t file cases.

In a phone interview, Valle told Davao Today that many Lumad victims who would like to go down from their communities in the hinterlands are stopped and apprehended even before they can go down the city.

(The primary difficulty there is because they abduct would be complainants. Those parents, teachers who are ready to file cases, are either harassed or abducted. When they go down to Davao City to file formal complaints, they are either killed right away or tortured. That’s what is happening in the countryside.)

Valle also belied Cabales’ statements that they have never filed a single complaint. Valle said they have filed several complaints since their formation in 2012, but none so far have progressed.

Valle cited the complaint they filed against North Cotabato Representative Nancy Catamco in the Ombdusman, which was dismissed in October last year.

Rep. Catamco figured in the raid of the United Church of Christ in the Philippines Haran compound here which had served as a sanctuary of evacuating Lumad since 1994.

“All cases filed by the SOS to the courts and the Ombudsman were dismissed. This means that justice never sided with the poor and the Lumad. Justice defends only the greedy and the government,” he said.

Valle said this turn of events greatly discourage the Lumad who would like to seek justice.

“For so long a time that we have been complaing, nothing has happened. Not one has been punished. No one has been put to jail, not even a single soldier was demoted,” he added.

Valle said they are still in the process of consolidating affidavits.

“They should expect that the case will not only be filed here. We will also bring this up to the joint monitoring committee of the [National Democratic Front] and the [Government of the Philippines] panel,” Valle said. (davaotoday.com)