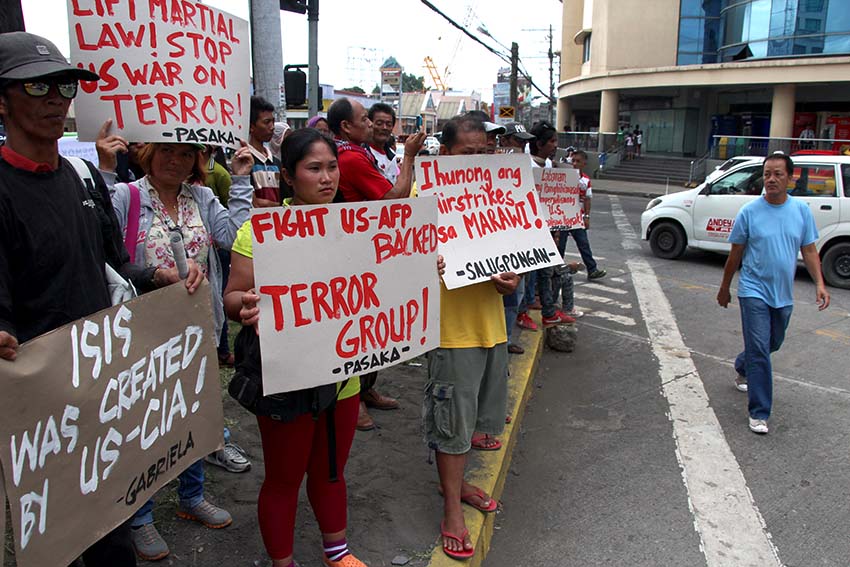 ASSERTIVE. Despite police pronouncements banning mass mobilizations during the Martial Law in Mindanao, members of organizations under the Bagong Alyansang Makabayan Southern Mindanao Region staged a rally along Roxas Avenue condemning the the declaration of Martial Law on Monday, May 29. The groups also marched to Rizal Park for a short program. (Paulo C. Rizal/davaotoday.com)

Apiag said one Abdullah Mamansag, 34, died after he was hit by military canons. A minor and a villager in Sulat were also injured and are currently recuperating in the hospital.

Apiag said martial law only emboldened the “rightists” and “peace spoilers” in the Duterte government.

He added the government has turned Mindanao into a “hotbed of state impunity”  even before the declaration of Martial Law last week.

On Monday, two female residents of Purok Buongon, Baranggay Poblacion in Maragusan, Compostela Valley appealed to President Rodrigo Duterte to revoke his martial law declaration, after soldiers allegedly arrested their husbands for being members of the New People’s Army.

“In Southern Mindanao, there are already 34 people, mostly farmers and lumads, who have been victims of politically-motivated extrajudicial killings. Since the AFP’s All-Out War declaration in February, there have been 20 incidents of indiscriminate aerial bombings and operations,” he said.

Apiag urged Duterte to lift Martial Law, which he said “curtails and attacks brazenly the people’s civil and political liberties and basic freedoms.”

“Duterte should exorcise his cabinet from peace saboteurs and human rights violators.  But most importantly, Duterte should revoke his Martial Law declaration and shift his focus instead on rebuilding peace and justice which have long been deprived of the Filipino people,” he said.

Duterte declared the whole island of Mindanao in a state of Martial law on May 23 after a series of firefights between government troops and the Maute group in Marawi.

Army spokesperson Brigadier General Restituto Padilla said they have already rescued 390 civilians. He reported that the 390 went through a series of interviews to ensure that they are not disguised Maute members.

Padilla assured that they are “on top” of the situation, despite declining to comment if the 60-day duration of the Martial Law would be enough to solve the Maute problem.

In an earlier report, Padilla also maintained that they are conducting only “surgical airstrikes with pinpoint accuracy” to prevent further loss of lives and property. (davaotoday.com)