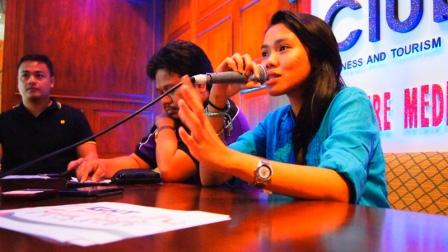 Kit Iris Frias, Vice President for Mindanao of the College Editors Guild of the Philippines, said that without a conviction of the Ampatuan massacre, other cases of impunity against journalists would continue. (contributed photo by Paolo Rizal, UP Mindanao’s Himati)

DAVAO CITY –  As November 23 marks the fourth year of the Ampatuan massacre that killed 58 people including 32 media workers in Sitio Masalay, Ampatuan town of Maguindanao, the National Union of Journalists of the Philippines (NUJP) Davao Chapter said it is another year where justice has eluded the families of the victims.

The trial involving 103 incarcerated suspects, including alleged masterminds belonging to the Ampatuan clan that once held political posts in Maguindanao and Autonomous Region of Muslim Mindanao, has remained on its first stage, which is the arraignment of suspects.

For Germelina Lacorte, Vice-Chair of NUJP Davao, this is an alarming case where the justice system is denying justice.

“It’s glaring after four years, we should be alarmed that justice has not been achieved,” she said.

Jessie Casalda, chair of NUJP Davao, said that the trial has been bogged down with the many legal maneuvers such as petitions and pleadings filed by the Ampatuans’ lawyers, which the courts have to respond.

“Imagine 103 suspects raising their petitions to court, these further delayed the trial,” Casalda pointed out.

Casalda added that lack of transparency such as media coverage on the trial, which their group petitioned to the Supreme Court and was overturned, kept the public in the dark on the pace of the trial.

“They are taking the case away from the public. What happens is, anything can happen in a closed door trial.”

Casalda said the public needed “transparent justice” especially on the so-called “trial of the century” of the biggest single case of journalist killing in the world.

“I remember one Supreme Court justice from another country who said that ‘(T)he walls of justice shall be made of clear glass, so everyone can see what’s inside. A clear justice is a transparent justice’,” he quipped.

Lacorte said if the Ampatuan trial is a “test case” for Aquino, then he is failing.

Lacorte noted that because of Aquino’s lack of decisive moves to expedite justice, the victims’ families remain vulnerable and unable to parry pressures and bribery attempts in exchange for the Ampatuans’ freedom.

Casalda also said that NUJP has done so much in pressuring the government, from lobbying with the Justice Department to petitioning for transparency.

“They already had the perpetrators, even the witnesses, what are they waiting for?” asked Casalda. “Three of the witnesses were killed, and another is in jail. What is happening?”

Among the killed witnesses was a key aide of the Ampatuan patriarch who heard the suspects plotting how to stage the murder.

Kit Iris Frias, Vice President for Mindanao of the College Editors Guild of the Philippines, said that without a conviction of the Ampatuan massacre, other cases of impunity against journalists would continue.

“If there’s not one of them being convicted, what will happen to the other cases? This one has glaring proof, but nothing has happened,” said Frias.

The Center for Media Freedom and Responsibility said that 19 journalists have been killed under the Aquino government, including Jessie Camangyan of Mati, Davao Oriental and Nestor Bedolido of Digos City, Davao del Sur.

But the Philippine Center for Investigative Journalism said the figure is higher at 23, calling it the worse case of killngs per year since 1986 under his mother, former President Corazon Aquino.

Casalda said that media groups such as NUJP and CEGP would hold protests on November 23.

“Let’s go beyond remembering the victims. The people should stand up and act against impunity. We can’t be silent anymore,” he said.(Tyrone Velez/davaotoday.com)