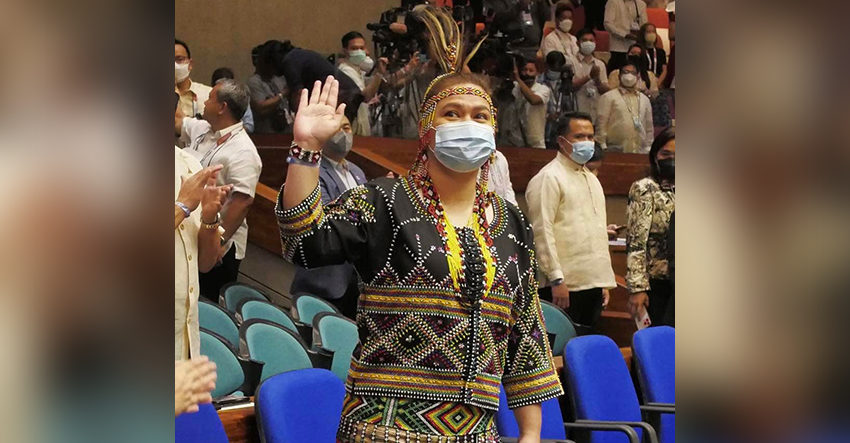 Duterte defended her choice of wardrobe as “solidarity with the IPs of Mindanao and the many other indigenous peoples’ groups all over the country who have been rising up against the terrorist New People’s Army’s chronic exploitation of their children, arming them as new recruits.”

“We at Sandugo Alliance are greatly disappointed but unsurprised at VP Sara Duterte’s defense of her wearing traditional Lumad attire at the recent SONA. More than identity or cultural appropriation, the issue is a matter of hypocrisy and decency. By displaying out traditional attire on her body, she projects the illusion that is promoting our culture, rights and aspirations,” the group said in a statement Saturday, July 30.

In fact, the group said, the opposite of her statement is true as they pointed out that when Duterte was mayor of Davao City, she was instrumental in the closing of Lumad schools based in Davao City, which were red-tagged and made statements against the Lumad “bakwit” (evacuees) communities who sought sanctuary in UCCP Haran in Davao City.

They also pointed out during the presidency of her father Rodrigo Duterte, his administration has left a bloody trail in Mindanao Lumad, Aeta, Tumandok, Cordillera, and Bangsamoro communities.

“If she and her family choose to crush our lifeways, she has no business wearing our clothing,” it added.

Sandugo also came to the defense of former Bayan Muna Party-list Representative Eufemia Cullamat, who was criticized and red-tagged by Duterte for issuing a challenge to the Vice President to take action against red-tagging.

That the vice president resorted to red-tag a former party-list representative and a Lumad leader who herself experienced evacuation, showed that Duterte “is her father’s daughter after all”, the group said.

READ: A timeline of the birth and attacks on Salugpongan schools

“The social fabrics of our communities have been ravaged by these administrations; ironically, these very administrations were also the most conscious of displaying our fabrics and material culture in government activities,” the alliance said.

The group said “the well-being of our people is a prerequisite for the imagination of designs and motifs. It is impossible to even conceive of weaving when we are hamletted, militarized, internally displaced, and besieged by massacres.”

They also point out the irony that while Duterte was “preening” in her Lumad attire, two more Lumad students were arrested after attending a SONA rally in Davao City.

Sandugo challenged Duterte and public officials and celebrities to be aware of what cultural attires of indigenous tribes represent.

“To VP Sara Duterte, as well as all our esteemed lawmakers and celebrities: Every time you wear ikat, inaul, or any of our backstrap-woven masterworks, remember that we are suffering from hunger, displacement, commercialization, and militarization. Each time you wear abaca or mother-of-pearl, remember our heartlands which are destroyed by open-pit mining and foreign aggression. Each time you wear fabrics dyed in indigo blue or lagu red, remember that our homes are stained by the blood of our leaders and children felled by fascist bullets. You are privileged to wear these weaves in air-conditioned halls and glamorous photographs; we cannot even harvest or go to school without fear,” the group said.

“You are most welcome to share our pride in our weaves. But we hope that you also care for us, the communities from whom these beautiful garments emerged,” Sandugo added. (davaotoday.com)