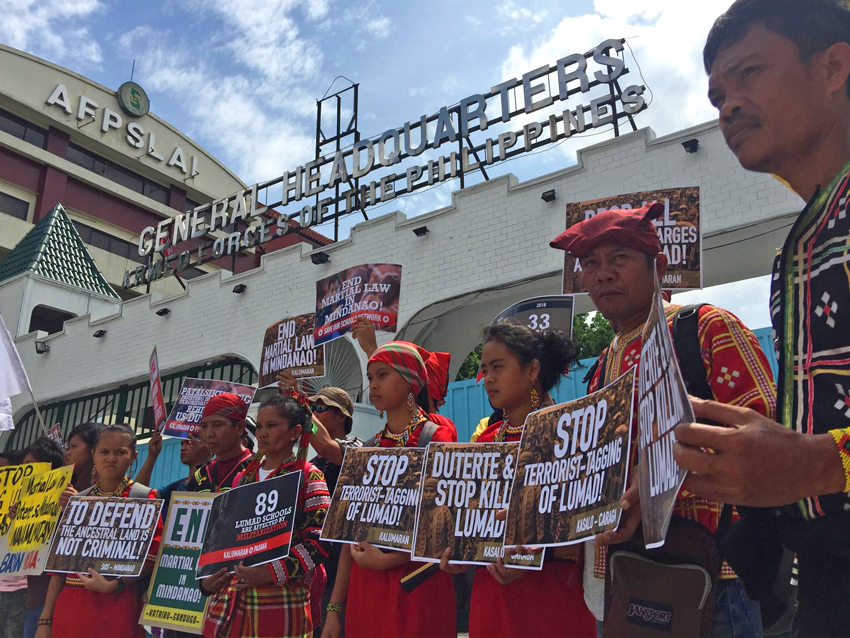 Members of the Sandugo Movement of Moro and Indigenous Peoples for Self Determination protest in front of the headquarters of the Armed Forces of the Philippines on Friday morning, May 18, 2018, and dumped rubbles at the gates of the camp to symbolize the “ruined lives” brought by the martial law. (Photo courtesy of Kathy Yamzon)

CAGAYAN DE ORO CITY, Philippines — A human rights watchdog has called on the international community to investigate the reports of abuses being perpetrated by state agents during the almost three years of military rule in the island.

This after Pres. Rodrigo Duterte said he decided not to extend the implementation of Martial Law in Mindanao beyond its third expiration date on Dec. 31, 2019.

In a statement Wednesday (Dec. 11), Barug Katungod said the time is right for human rights advocates to investigate the alleged cases of violations state forces have committed against civilians during the time martial law was in effect.

“It is high time that a comprehensive and independent investigation by international human rights watchdogs be carried out to make the Duterte regime and its armed forces account for the killings and other human rights abuses left behind by almost three years of military rule,” said Bishop Redeemer Yañez, convener of Barug Katungod and official of the Iglesia Filipina Independiente.

He said, “if Duterte is not afraid of having committed human rights violations and crimes against humanity under Martial Law, he should allow these international probers into Mindanao.”

The group noted that martial rule has enabled the Duterte administration to entrench 75 percent of the military’s combat forces in Lumad (indigenous people), Moro, and peasant communities.

“These communities are the guardians of the remaining ‘last frontiers’ of natural resources like mineral deposits, hydropower, and agricultural lands that Duterte has pledged to foreign investors,” Yañez said.

Since it was implemented in 2017 at the height of the siege in Marawi City, he said Martial Law in Mindanao has resulted in more than 162 extrajudicial killings of individuals, 704 cases of fabricated charges, 284 case of illegal arrests and detention, 1,007 victims of aerial bombardments, and forced evacuations of more than half a million people.

This announcement of ending Martial Law, Yañez said, ultimately will not bring relief for all the victims of killings and other forms of abuse and repression to the marginalized civilians.

“The Maranaws of Marawi and the rest of the Moro people, the Lumad, and the peasants, church people and lawyers, urban poor, workers, and human rights advocates who have been victimized by Martial Law should be given justice through this investigation. Thousands more stand to become victims of extrajudicial killings and other human rights abuses under a de facto Martial Law nationwide,” he added. (davaotoday.com)