Impunity feared in another priest’s slay 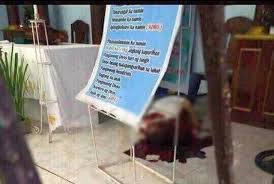 Karapatan said that the killing of Catholic priest Fr. Richmond Nilo, a Catholic priest in the Diocese of Cabanatuan was a “clear sign of a thriving climate of impunity in the Philippines, where killings have been normalised by government itself while perpetrators are rarely prosecuted and not punished.”

Nilo’s death came after that of Father Mark Ventura, who was gunned down by riding-in-tandem killers after saying mass in Gattaran, Cagayan. Fr Ventura was known for his advocacy against mining and being of aid to indigenous peoples.

Nilo was the second priest to be killed recently in Nueva Ecija while another priest, Father Marcelito Paez, was also shot by a riding-in-tandem December last year. Paez was known as an activist-priest who spoke up on human rights. He facilitated the release of political prisoner Rommel Tucay in Cabanatuan City.

In its statement, Karapatan doubted “authorities that it will get to the bottom of these recent murders and that the perpetrators and masterminds will be brought to justice immediately, given the current context.”

According to them, under the current administration “state-sponsored killings have been continuously justified by government, while police investigations regarding these killings have gone nowhere. Violent crimes and the spectre of “terrorism” have been even used as excuses to impose military rule and repressive measures.”

In the first week of June, lawyer Madonna Joy Tanyag, who was also pregnant, was stabbed to death in Barangay Vasra, Quezon City while Dennis Denora, publisher of community press Trends and Times, was shot dead in the head while he was on his car in Barangay New Pandan, Panabo City, Davao del Norte. (davaotoday.com)