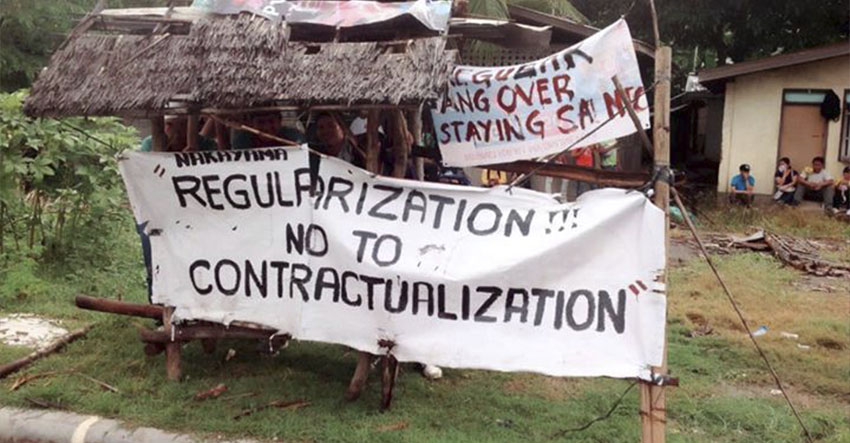 Workers of Nakayama Technology Corporation protest in front of the company’s manufacturing plant to demand regularization of more than a hundred workers. (photo grabbed from Projectbase sa Nakayama facebook page)

DAVAO CITY – Workers of a Japanese company which manufactures wall panels, roofing systems, and other building and housing materials for export is currently on demonstration after the management reportedly sacked more than 100 workers who refused to sign contracts putting them under labor agencies.

In a phone interview, Darren Dela Peña, 43, president of the Nakayama Organization of Workers – Southern Philippines Federation of Labor said they are supporting the majority of the workers who refused to sign the contracts with the agencies.

Dela Peña narrated that on June 30, Atty. Robert De Leon who is the legal counsel of Nakayama, along with the company’s Vice President identified as Akihiro Oshimaro, declared 157 project base workers as regular workers and that they would just have to submit their resumes.

The regular status of the workers would supposedly start by July 1, this year.

“Now they want the workers to sign a contract with the agency  and the workers did not sign, because they believe that they don’t have to since they are already declared as regular workers,” said Dela Peña.

“They didn’t sign a contract, now they were not allowed to work in Nakayama,” he said.

The said contract, Dela Peña added, states that the workers who signed are not anymore connected to Nakayama and will be under the Workstation and Fat Manpower Services.

In a Facebook Account of Projectbase sa Nakayama, which is apparently made to air out the workers grievances, a certain Jessica Ferolin Dimas posted on Tuesday:

(The legal counsel of Nakayama, along with one Japanese, announced himself that starting July 1, 2015 all project based workers in Nakayama are regular workers. A while ago, the Japanese was interviewed and said “those workers who are rallying outside are not workers of Nakayama, they are under the agency..” Have you forgotten what you told the workers that they would be regular workers starting July 1 or is it just that you do not have a word of honor?)

Dela Peña said out of the 157 workers, only 122 are left who still refuse to sign new contracts placing them under labor agencies.

Kilusang Mayo Uno (KMU) said “compelling the workers to sign a new contract would strip them of their right to regular employment.”

“By operation of law, these 157 workers should already be considered regular workers since they have been working with the company for one to six years.  The Labor Code ensures that if a worker has been employed with a company for six months and one day, they are effectively considered to be regular workers,” said Carlo Olalo, spokesperson of KMU Southern Mindanao.

Olalo said Department of Labor and Employment Department Order No. 18-A (DOLE DO 18-A), signed under Aquino’s term, is “permitting companies to convert “overstaying” workers (shopfloor terminology for workers who by law, should have been declared as regulars but remain contractual workers) into agency hires capriciously.”

He said the Department Order has made contractualization “even more widespread through the creation of labor agencies.”

“Under DO 18-A, it has now become legal for companies to evade responsibility in giving workers their right to regular employment. Agency hires have 5-month contracts which instantly cut off their chances at becoming regular workers with rights and benefits under the law,” Olalo added.

KMU said they are condemning the Aquino administration “for its espousal of neoliberal policies in labor, particularly the legalization of contractual employment through the passage of labor laws and policies that normalize the continuous and sustained attack of workers’ right to life, human rights, and freedom of association.”

Dela Peña said they will fight for the remaining workers who decided not to sign the contract.

He said there will be a conference on Thursday and that they are requesting the Dole to allow them represent for the workers.