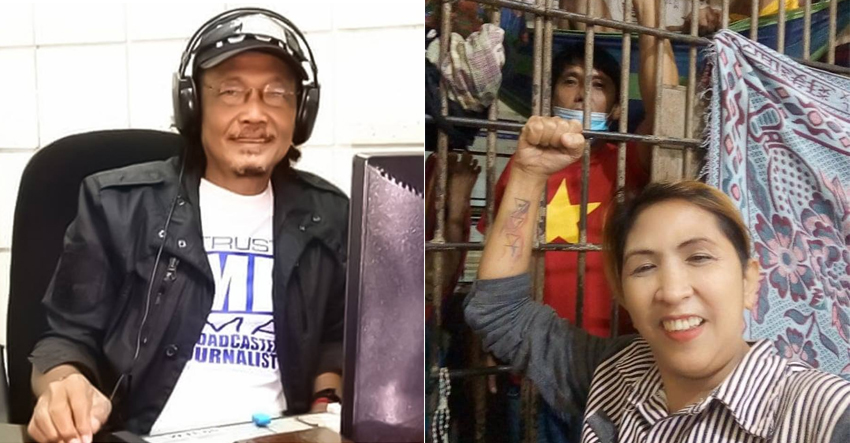 DAVAO CITY, Philippines – In a single day on November 10, a journalist was shot and two others were arrested for cyber libel, raising concern on the state of journalists’ safety amidst the pandemic and the impunity.

The National Union of Journalists of the Philippines (NUJP) had its hands full on that day, issuing statements condemning the killing of radio commentator Virgilio Maganes in Pangasinan, the arrests of Camarines Norte journalists Virgilio ‘Bagwis’ Avila, Jr. and Mia Concordia over a cyberlibel case, and condemning the red-tagging of its former national chair and Philippine Daily Inquirer correspondent Nestor Burgos.

NUJP said there is irony these cases came a week after the International Day to End Impunity for Crime Against Journalists which falls on November 3.

Maganes, a block-time commentator for dwPR and columnist for Northern Watch, was shot dead by motorcycle-riding gunmen in front of his home in Villasis early Tuesday morning. He was the 18th journalist murdered during the Duterte administration and the 190th since 1986, NUJP said.

“His death is an indictment on this government’s empty boast that press freedom is alive and well in the country,” NUJP said in a statement.

Maganes had survived an earlier attempt on his life in 2016 when he was shot on his way to his station. He played dead as gunmen left a cardboard sign beside him with the message “Drug pusher, huwag pamarisan (don’t emulate)”, a move which NUJP said was meant to silence any probe on this attempt.

NUJP believes the murder could be linked to the attempt on his life on 2016, and demanded authorities to work fast on the case.

Meanwhile, radio journalists Avila and Concordia were detained over several counts of cyber libel filed against them by Camarines Norte governor Edgar Tallado over their Facebook posts that criticized the local government’s alleged negligence in COVID-19 response and issues on corruption.

Avila was arrested first, then Concordia was detained when she visited him in detention. The two were detained for six hours and were able to post bail for their release.

The NUJP had campaigned to decriminalize libel, which they see has become a weapon for authorities against critical journalists.

Meanwhile, the NUJP slammed the red-tagging against its former chair Nestor Burgos made by Jeffrey Celiz aka “Ka Eric”, the “star witness” of the National Task Force to End Local Communist Armed Conflict (NTF-ELCAC) who alleged in a YouTube video that Burgos was a member of the Communist Party of the Philippines (CPP) in Panay who recruited him to the party.

While Burgos and Celiz had known each other they are based in Western Visayas, NUJP said Celiz’ claims that Burgos, a full-time journalist, is part of the propaganda machinery of an underground movement is “preposterous”.

The Inquirer also released a statement, expressing grave concern over Burgos’ safety following the allegations made by Celiz, and clarified that Burgos has been part of its staff since 2001.

“Such sweeping statements may put Burgos and other journalists in danger from forces that are acting with impunity and violence against those erroneously tagged as enemies of the government,” it added.

NUJP hits back on Celiz, who was previously tagged as a drug pusher, for making statements he admitted he couldn’t back with evidence. The media group believes he is possibly “parrot[ing] the fictions handed him, liberally sprinkled with his own concoctions, most likely to get in his handlers’ good graces.”

Recently, the Committee to Protect Journalists (CPJ) released its 2020 Global Impunity Index, with the Philippines remaining to be one of the most dangerous countries for journalists. (davaotoday.com)