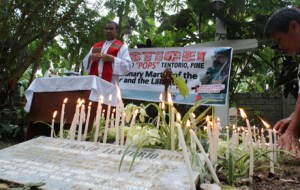 CANDLES FOR JUSTICE. "Let the candles we light upon Pops' grave be our symbol in pursing justice for his killing," parish priest Pol Paracha says in a candle-lighting activity in Kidapawan City. (davaotoday.com photo by Medel V. Hernani)

Fr. Pops was killed at his parish in Arakan town last October.  The missionary spent more than half of his life with the peasants and indigenous peoples.  His death sparked national and international outrage, and many groups were quick to accuse the military as behind his killing.

Last month, one Jimmy Ato, a suspect of the killing, was arrested by government forces.  In his sworn statement, he identified businessman William Buenaflor and former Arakan town’s police chief Senior Police Inspector Benjamin Rioflorido as the masterminds of the killing.  He also said he only served as “lookout” and that brothers Jose and Dima Sampulna were the triggermen.

During the mass for Fr. Pops, parish priest of Roxas town Paulito “Pol” Paracha said he is not convinced that this should be the end of the search for the perpetrators of Fr. Pops’ brutal murder.

“Seeking for justice is like quenching the thirst of the person.  If the killer is indeed caught, who is his accomplice?  More importantly, who is the mastermind?  If these people are not put to justice, then the thirst for justice is not quenched,” he said.

Four months has passed since his untimely death, many still seek justice for Fr. Pops.

Arakan priest Peter Geremia said he sent a letter to DOJ (Department of Justice) secretary Leila De Lima to “investigate the 57th Infantry Battalion, Special Forces and intelligence assets who were all present in the scene of the crime at that time conducting Oplan Bayanihan.”

“Since this very unusual murder was committed in their area of responsibility, under their watch, with many soldiers around the site of the crime, shouldn’t they be required to report all movements of elements possibly connected with the crime?,” Geremia said.

Geremia, a long-time friend of Fr. Pops questioned the military’s mandate saying, “If their mandate is to protect the civilians, shouldn’t they explain why someone like Fr. Fausto was eliminated under their eyes?  Common sense tells us that the planners and the executioners needed very good connections to carry out their mission.”

The Justice for Fr. Pops Movement plans to hold another gathering next month.  “We will remember all the important milestones for Fr. Pops.  Rain or shine, let’s meet again on March 17,” Paracha, a close friend of the late priest, said.

After the liturgical celebration, a candle-lighting activity was also held. 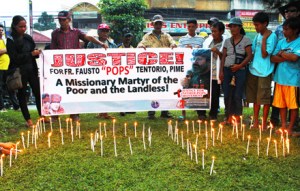 REMEMBERING THE FATHER. Four months after the brutal death of Fr. Pops, peasants and lumads remember him by offering lit candles in his grave in Kidapawan City. Supporters of the slain Catholic priest strengthen their call for justice. (davaotoday.com photo by Medel V. Hernani)

Meanwhile, youth organization Idol Ko si Pops Movement (IKPM) initiated a cultural production in the barangay hall of Poblacion in Arakan town.  Peasant and Lumad organizations showcased their talents as expression of their solidarity in the quest for justice for Fr. Pops.

Erwin Panezales, spokesperson of the Student Christian Movement of the Philippines -North Cotabato and IKPM convenor said, “Fr. Pops was one of the clear-cut victims of the Aquino administration’s Oplan Bayanihan which is not different from the Oplan Bantay Laya under (Gloria) Arroyo’s reign.”

In Davao City, progressive groups staged a picket to denounce the “tirades” of Col. Leopoldo Galon, spokesperson of the AFP’s Eastern Mindanao Command, against the Assumption College of Davao, and other personalities and organizations that “call for justice for the slain Italian missionary.”

Galon has ordered the Catholic-run Assumption school to tear down a streamer that calls for justice for Fr. Pops.  He called the streamer, that hangs above the school’s gate, a “malicious propaganda” against the AFP and threatened to campaign against the school if administrators will not remove it.  (John Rizle L. Saligumba/davaotoday.com)