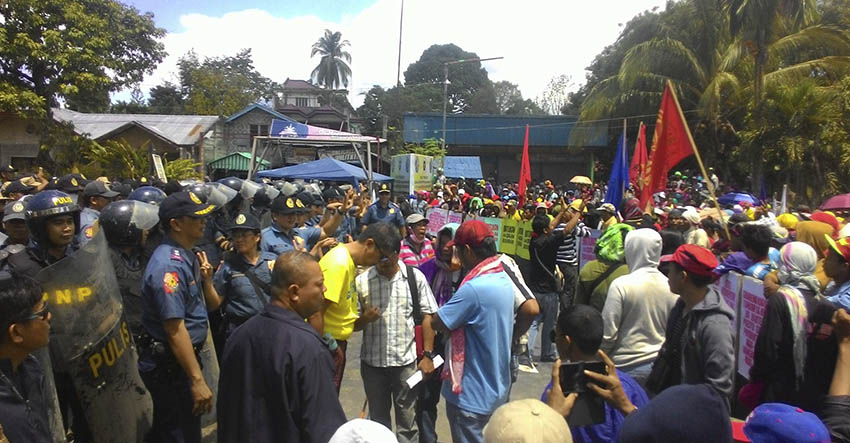 Kidapawan City Mayor Joseph Evangelista (in yellow shirt) talked with the protesting farmers on the first day of the barricade. (Contributed photo by Kath Cortez)

KIDAPAWAN CITY — Kidapawan City Mayor Joseph A. Evangelista issued a “Notice of Violation” to the Spottswood Methodist Center in a letter dated April 1, directing the church to explain why their business permit should not be revoked.

The notice was addressed to the officials and board of trustees of the center which became a sanctuary for rallying farmers and progressive groups during the violent dispersal last Friday, April 1.

According to the notice, the Spottswood Methodist Center “is being used and is continuously used, up to this writing, as HEAD QUARTER billeting or harboring the leaders and members of illegal demonstrators or rallyists, unlawfully and feloniously barricading or blocking public roads or national highway since 29 March 2016, until today.”

“You are hereby being notified that it is violative of city ordinance for any business establishment to abuse the privilege to do business or pursue an activity to the injury of public morals, peace and order and public safety, or when the place of business becomes a nuisance or is allowed to be used by disorderly characters, criminals or persons of ill repute,” the notice added.

The notice also asked the church to explain under oath why its business permit should not be denied. Spottswood is given five days from the time it received the notice to explain its side.

Emmanuel A. Mahipus, legal counsel for the United Methodist Church, said they only received the letter on Monday, April 4.

‘Accusations of no basis’

In his letter of reply to Evangelista dated April 4, 2016, Mahipus said the mayor’s letter “shows imputations of wrong and legal conclusions without factual and legal bases.”

“You are accusing our concerned religious leaders of ‘harboring leaders and members of illegal demonstrators or rallyists…’without even citing the specific law or provisions of ordinance allegedly violated,” the letter reads.

Mahipus said the UMC officials “categorically denied” the accusation. He also requested the mayor to “be appraised by any evidence” held by the local government unit which shows that the activities conducted inside the church compound are against the law or their church’s policy of helping the poor.

Mahipus also said that they are reminding Evangelista of his responsibility as a public officer.

“May we remind you also of your responsibility as a public officer to maintain your office as a public trust… and refrain from using your office in furtherance of any injustice,” said Mahipus.

“We decry any form of violence, harassment, intimidation and threats against our people,” he said. (davaotoday.com)