“Kill them, they are NPAs!” Lumad torture victim recounts ordeal 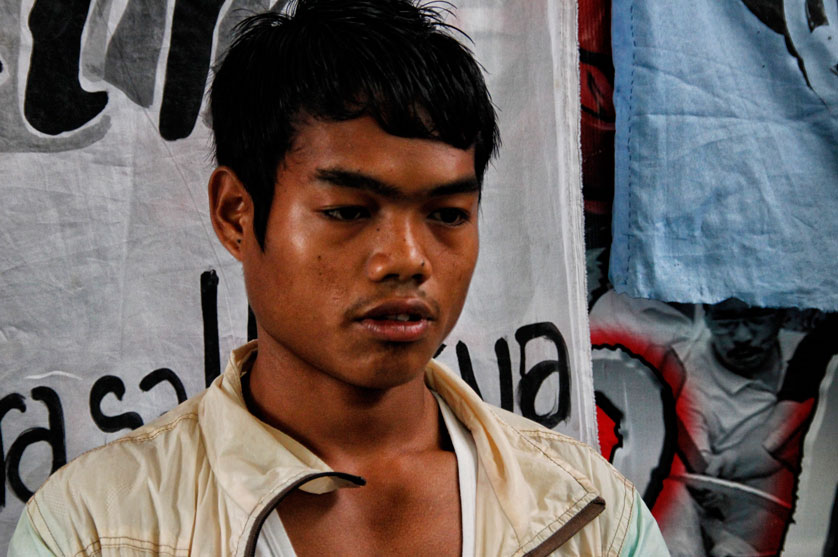 These were the words heard by Rolang Sanglid, an Agusanon Lumad, heard when he and three other youths crossed paths on Monday with paramilitary Bagani Force and soldiers in the highway of Kauswagan, Loreto, Agusan del Sur.

Sanglid, 19 and his three companions Rico Basilisco, 18; Alan (not his real name), 16; and John (not his real name),17, said state forces prevented them from going to the local Comelec in order to register as first-time voters in time for the upcoming Sangguniang Kabataan (Youth Council) and Barangay elections

Sanglid’s companions Alan and John are currently held under custody of the Social Welfare Department of Loreto facing charges of murder filed by the paramilitary.

Sanglid is now in Davao with John’s mother Estrilla Basilisco as they sought help with Karapatan for the release of Alan and John.

He told Davao Today that that they had nothing to do with the killing of Kauswagan Barangay captain Ramon Diaganonon, contrary to the claims of the paramilitary Baganis.

Sanglid also recalled his ordeal at the hands of the military captors.

“Ninaog naman sila sa trak, gipa line mi. Pagkahuman niabot tog nagtudlo, gitudlo ang tulo nako ka kauban ingon nga ‘mao nang NPA, pagpamatya ninyo na mga npa na’. Pagkahuman ato, gipangapos ang tulo ug gipasaky mi sa sakyanan, kaming upat. (They came down from the truck and made us fall in line, then one of them pointed at my three companions saying ‘They are NPAs, kill them!’ Then they tied up my three companions and forced the four of us aboard their truck.)

Sanglid said while they were on board, the Baganis beat and kicked his companions; they spared him because he was a neighbor of one of the paramilitary forces.

He said they forced them to lie flat on the truck floor while they heard shots being fired from the background.

The troops stopped in Baliti village and continued beating the three. Sanglid said Bagani Forces talked about killing them off but did not proceed.

He remembered they pleaded for their lives and insisted they were innocent of the charges.

Sanglid and Basilisco were rescued hours later by relatives who pleaded for their release.  But Alan and John were detained at the Barangay Hall of Kauswagan village.

Basilisco said Alan and her son, John, were tortured; bruises were all over their neck and body.

Basilisco appealed to authorities to release the two minors. “Hinaot na buhian nila akong anak. (I wish they would release my son.)”

She also asked state forces to stop hurting civilians in their counter-insurgency campaign.

Karapatan Southern Mindanao’s Hanimay Suazo slammed the soldiers belonging to the Army’s 26th Infantry Battalion and the Bagani Force for the torture and grave human rights abuse committed against the minors. (Earl O. Condeza, with reports from Ace R. Morandante/davaotoday.com)