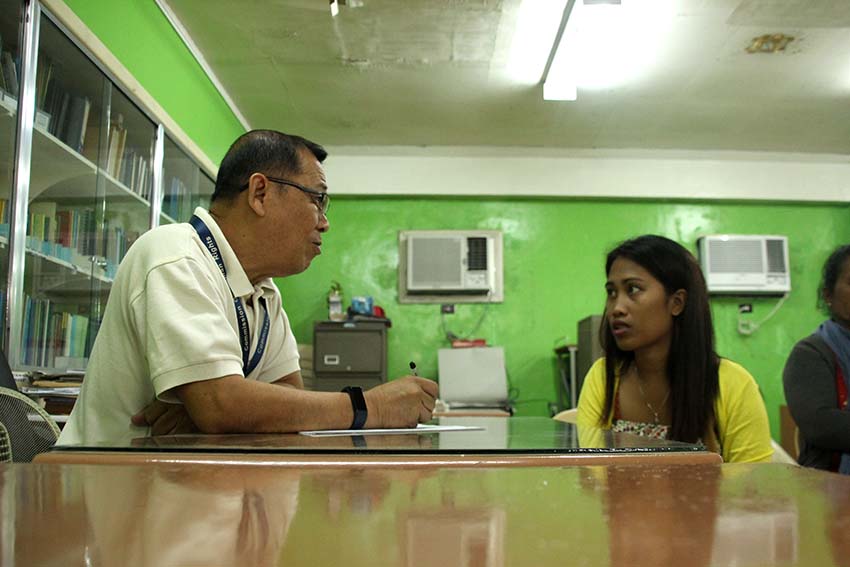 FORMAL COMPLAINT. Nerhaya Talledo, 24, relays to the Commission on Human Rights investigator how his father, Estanislao Talledo and four other farmers were apprehended by the 66th Infantry Battalion and detained by the Compostela Valley Municipal Police on July 3. Talledo denies that her father was a New People’s Army fighter, and claims that the explosives found in his father’s belongings were fabricated evidence. (Paulo C. Rizal/davaotoday.com)

Nerhaya Talledo, 24, relayed to a CHR special investigator how her father, Estanislao Talledo along with four other farmers were detained by soldiers while on their way to attend a peasant assembly in Brgy. Mangayon, Compostela town, Compostela Valley.

Along with Talledo were Alicia Tindasan, 62, Jhona Rose Baugto, 39, Rolando Segovia, 47, and Alexir Mata, 31, all members of the Compostela Farmers Association. They were apprehended by the military and were turned over to the Compostela Municipal Police Station where they were charged with illegal possession of explosives.

In earlier interviews, the military claimed that the captured farmers were New People’s Army guerrillas.

Nerhaya vehemently denied the claim, insisting that his father was merely a farmer. Nerhaya also claimed that the explosives found in his father’s belongings were fabricated evidence.

Meanwhile, Christopher Alia, a member of the Hugpong sa mga Mag-uuma sa Mabini, represented the family of Carolina Arado, who died after unidentified gunmen peppered her house with bullets on July 13.

Arado died on the spot, while her husband, Charlito Arado, 59, daughter-in-law Analisa Arado, 30, and two minors Arjun Arado, 12 and Junior Arado, 8 were wounded.

Alia, a member of Humabin, said nobody from the family could surface as they were either still hospitalized, or have gone in hiding in fear of the military. But the army denied the allegations.

Both Talledo and Alia said they hoped that the CHR could help their cause, now that they have filed formal complaints.

In past statements, the CHR said that it has not received evidence of abuses committed during the implementation of Martial Law in Mindanao.

However, in an interview, CHR 11 Special Investigator Jun Cajes said they have indeed received several complaints in the region, but have not finished their investigation.

Cajes also clarified that the CHR was only an investigative body and could not prosecute cases. Instead, it could only forward their findings to the fiscal or the Ombudsman.