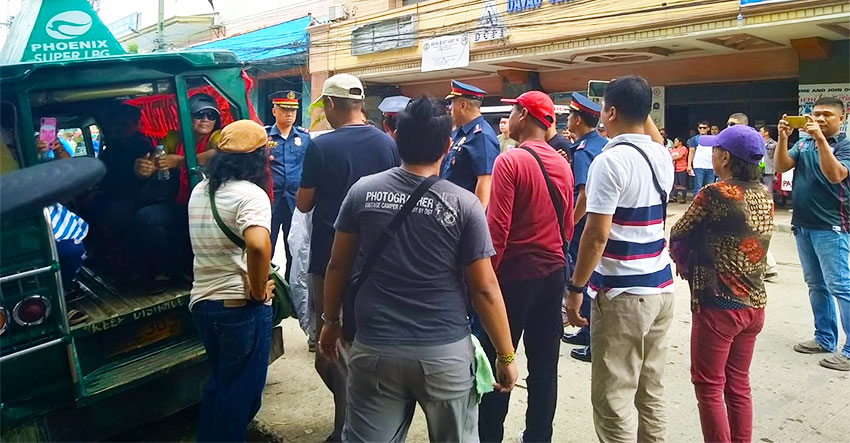 Police officials arrive during the picket of workers under Kilusang Mayo Uno at the regional office of Department of Labor and Employment. (Photo courtesy of KMU-Southern Mindanao Region)

DAVAO CITY, Philippines — The labor group Kilusang Mayo Uno (KMU) complained they were harassed by the Davao City Police during their picket in the regional office of the Department of Labor and Employment (DOLE) on Monday.

Their members held a picket in part of their national campaign calling for the end of contractualization and 750-pesos national minimum wage.

KMU Southern Mindanao Secretary General Carlo Olalo said their ranks on the picket was around 20, and they felt harassed when the number of police personnel arrived and swelled up to a hundred.

Davao City Police Officer Director Alexander Tagum arrived when the picket was ending and ordered police to frisk the picketing workers “without consent and warrant”.

The police chief told Davao Today that KMU conducted an “illegally assembly” as they did not secure a permit for the protest. He also claimed the group “obstructed traffic” as their vehicle was “illegally parked”.

But Olalo said what the police was harassment and intimidation, as they were within the Constitutional right to express their grievances to the government.

Tagum said rallies will be allowed only at the city’s Freedom Park along Roxas Avenue.

Olalo, in a statement, criticized that the Davao City Police is enforcing a local ordinance that prohibits and penalizes protest actions for the reason that it blocks traffic.

He said venues where they stage rallies such as Rizal Park are now off limits to protest actions. While protesters coming in from other provinces are barred from entering the city by the Task Force Davao.

“Mayor Inday Sara Duterte-Carpio, like her father, is intolerant of dissent and rules the city through fascist and militaristic means. Her high-handed tactics against the toiling people stands in contrast to her preferential treatment of businesses,” Olalo said.

KMU-SMR recalled that last April 2, 2018, the mayor ordered the arrest of workers of Coca-Cola Bottlers who staged a protest for their illegal termination from the company. The court dismissed the charges of “simple disobedience” filed by the police against them.

Another case involved the Task Force Davao last October 23, 2018, which refused the entry of striking Sumifru workers from Compostela Valley from attending a labor dispute meeting with DOLE.

KMU said the latest incident is “another testament why the country is listed among the top ten worst countries around the world in terms in workers’ rights”. (davaotoday.com)