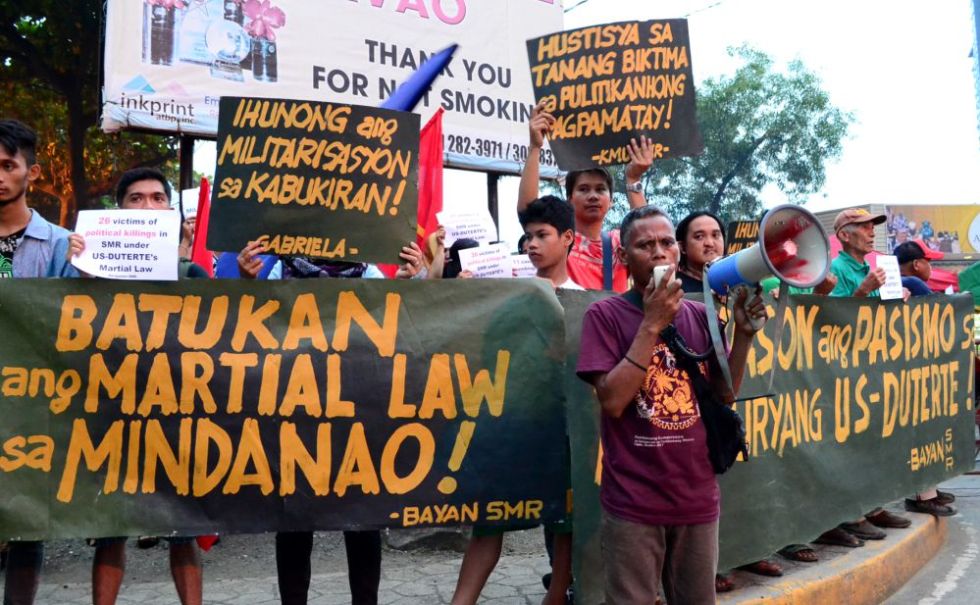 NO TO MARTIAL LAW. Progressive groups in Davao City hold a protest along Roxas Avenue to condemn the extension of martial law in Mindanao for one more year. In a joint session on Wednesday, December 13, the Congress approved the request of the Palace to extend the implementation of martial law until December 31, 2018. (Robby Joy D. Salveron/ davaotoday.com)

DAVAO CITY, Philippines — Critics of Martial Law are wary of a “full-blown” dictatorship under President Rodrigo Duterte after the Lower House and the Senate approved the extension of Martial Law in the whole island of Mindanao until December 31, 2018.

The Congress in a special joint session on Wednesday, December 13 voted 240-27 with zero abstention to grant Duterte’s request to extend Martial Law in Mindanao.

Progressive lawmakers who opposed the extension of Martial Law in Mindanao and activists here said its extension will only result to more cases of human rights violations.

Bayan Muna Partylist Rep. Carlos Zarate said: “We said it before and we will say it again and again: there is no basis for extending martial rule in Mindanao; it only caused hardships and sufferings to our people.”

Human rights activists here gathered in Roxas Avenue to protest the extension of Martial Law which they describe as a means to legitimize the crackdown against activists.

Members of the Bagong Alyansang Makabayan (Bayan) here said the killings of activists Apolonio Maranan on November 25 and Bernardo Clarion Jr, on December 8 were proof that authorities are targeting members of progressive organizations.

The police said Clarion is facing charges as one of the suspects in the killing of a police officer here. But human rights group Karapatan recorded Clarion as the 57th victim of killing of activists in Davao region since July last year.

“Aside from the continued killings in Davao City, the local government in Davao City (is) deliberately trying to suppress freedom of expression by pushing for a local ordinance to prevent protest along the Eastern Mindanao Command in Camp Panacan and designating rallies in one specific area downtown,” Bayan said.

Mags Maglana, convener of Konsyensya Dabaw, said they are not convinced with the decision to continue martial rule beyond December 31 this year.

“We find it disquieting that the President consistently defers to the military on the matter of Martial Law,” Maglana said adding that decisions should remain with civilian authority.

The group also feared that the intention to extend Martial Law will “lead to an eventual return to the same repressive conditions, if not worse, that Mindanawons encountered under the time of Marcos.”

Maglana cited President Duterte’s Proclamations 360 and 374 that terminated the peace negotiations between the Philippine government and the National Democratic Front of the Philippines and designated the Communist Party of the Philippines-New People’s Army (CPP-NPA) as a terrorist organization.

She said the President’s actions are all “ingredients for exacerbated armed conflicts in Mindanao.”

Albay Representative Edcel Lagman also said the extension of Martial Law in Mindanao “even for one day” has no constitutional basis.

On May 23, Duterte signed Proclamation 216 placing Mindanao under Martial Law after the Islamic State of Iraq and Syria-inspired Maute group attacked Marawi City. The proclamation also ordered the suspension of the writ of habeas corpus. The Congress extended it until December 31, 2017.

In another letter addressed to Congress, Duterte cited the need for the extension of martial law in Mindanao for another year “to ensure total eradication of Daesh-inspired Da’awatul islamiyah Waliyatui Masriq (DIWM), other like-minded Local/Foreign Terrorist Groups (L/FTGs) and Armed Lawless Groups (ALGs), and the communist terrorists (CTs) and their coddlers, supporters, and financiers.”

“A further extension of the implementation of Martial Law and suspension of the privilege of the writ of habeas corpus in Mindanao will help the AFP, the Philippine National Police (PNP), and all other law enforcement agencies to quell completely and put an end to the on-going rebellion in Mindanao and prevent the same from escalating to other parts of the country,” he said.

But the Mindanao Observatory for Human Rights said the government’s drive to end the decades-long rebellion of the CPP and its armed wing, the NPA, through its militaristic campaign has “done more damage to civilians than to the armed group it has vowed to target.”

Lawyer Czarina Golda Musni, spokesperson of the Mindanao Observatory for Human Rights said the terrorist targeted by Martial Law are “organizations and communities that have been fighting primarily for economic rights.”

Musni also criticized lawmakers who voted for the extension of Martial Law for “(turning) their backs on the Filipinos in Mindanao who exist in the fringes of society.”

She said the “diminishing power of the people” to freely express their opinions and complaints against the government is an attack to democracy. (davaotoday.com)