Leader of Agusanon Manobos killed, hacked in front of children 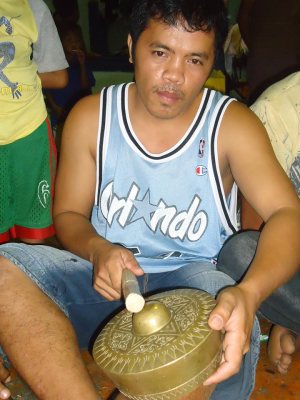 Davao City – A leader of the Agusanon Manobos who evacuated and camped in the city last month was gunned down and hacked to death by unidentified armed men in front of his two children on Friday.

In a text message to Davao Today, KASAKA spokesperson Marylin Edgames confirmed that unidentified men stopped Planos and forced his kids to disembark. Planos was then shot with a shotgun.  His ears and nose were hacked afterwards.

The two kids who witnessed the whole incident were left unharmed.

Edgames said Planos, a Bisaya settler living among the Manobos, and other leaders of KASAKA had been receiving death threats from the Philippine Army’s 26th Infantry Battalion and the paramilitary group Bagani.

KASAKA staunchly opposed intensive military and paramilitary operations in the area; the militarization, KASAKA leaders said, is linked with the entry of New Britain Palm Oil Ltd, which is eyeing KASAKA’s ancestral domain.

Juvanie Espana, Loreto Municipal Information Services officer, said in his blog that the company is planning to invest in Loreto as part of its 36,000 hectare-expansion in Asia.

Karapatan suspected that the military and paramilitary groups were behind Planos’ murder.

Edgames condemned the killing saying it was meant to silence the Manobos and stop the opposition to the palm oil plantation.

Last July, harassments from the military and the Baganis prompted some 800 Agusan Manobos to leave Loreto, especially after appeals to Agusan del Sur provincial officials bogged down.

The dialogue, brokered by City Mayor Rodrigo Duterte, concluded with an agreement providing, among other things, that the military and local authorities in Agusan should have  “no retaliatory action against the bakwits and the leaders of KASAKA.” (Earl O. Condeza, davaotoday.com)