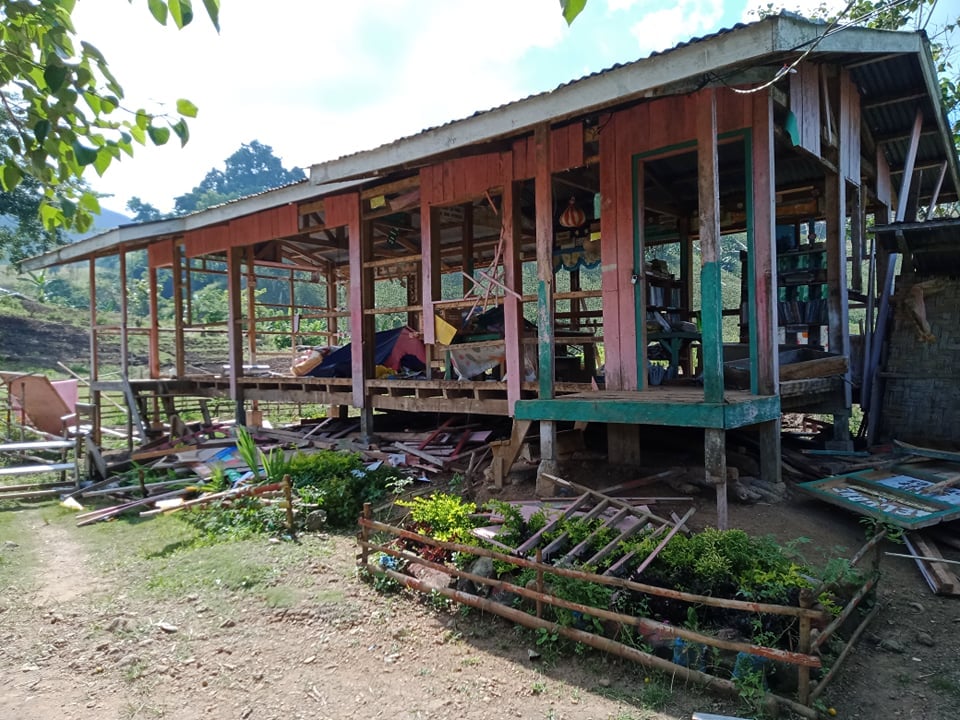 CAGAYAN DE ORO CITY, Philippines – A school for a tribal community in a remote village in Bukidnon was demolished by about 50 armed men on August 26, the Save Our Schools Network (SOS) said Saturday.

Their statement said teachers witnessed the incident that happened around 7:15 am, when they were on their farms when alerted by a student. They arrived at the school seeing armed mean tearing down the school and tearing up textbooks.

“The teachers were about to take photos of the incident but were threatened by the ‘Bagani’ leader Lito Gambay, who told them to leave as President Duterte will know about this,” SOS said on its Facebook post.

The two school buildings and a teacher’s cottage were built in 2007 and was funded by the European Union Aid and SFO-Overpelt of Belgium, the group said.

“The Save Our Schools condemn in strongest terms the unabated destruction and closure of Lumad schools in Mindanao,” the group said

SOS said that the community has identified Gambay as a leader of the paramilitary called Bagani under the command of the Philippine Army’s 89th Infantry Battalion (89IB).

In a phone interview Sunday, Lieutenant Colonel Silas Trasmontero, 89IB commanding officer, has denied Gambay is under his command.

The commander identified Gambay as a former New People’s Army fighter, who surrendered to his battalion last year, and is now a tribal warrior defending his community, but is not under the 89IB’s command.

“He [Gambay] is not part of our battalion. He has no 89IB identification card or a gun issued by the Army,” Trasmontero said.

Trasmontero said he has no paramilitary in his area of responsibility, only the Citizen Armed Forces Geographical Unit.

The army officer also said they have no hand in the demolition of the MISFI school buildings since it was initiated by the tribal community themselves. He said the school has been vacated when the Department of Education has established its schools in Barngay Matupe where 52 former MISFI Academy students have transferred.

Trasmontero said, the 89IB has assisted government agencies in building schools for the lumad communities in at least seven tribal communities in San Fernando and Kitatao towns in Bukidnon.

But the SOS said the 89IB’s move is “hypocrisy” for not acting on the destruction of the tribal school yet paraded Gambay during the opening of the DepEd schools.

In a separate social media post, MISFI said its school in Laburon has the approval of the Department of Education (DepEd).

“The school campus [in Laburon] is more than a decade old and has the Dep-Ed permit as Government Recognition status,” MISFI said.

The SOS said there have been 178 tribal schools in Mindanao that were forcibly closed by the government, claiming these are “rebel schools”. (davaotoday.com)