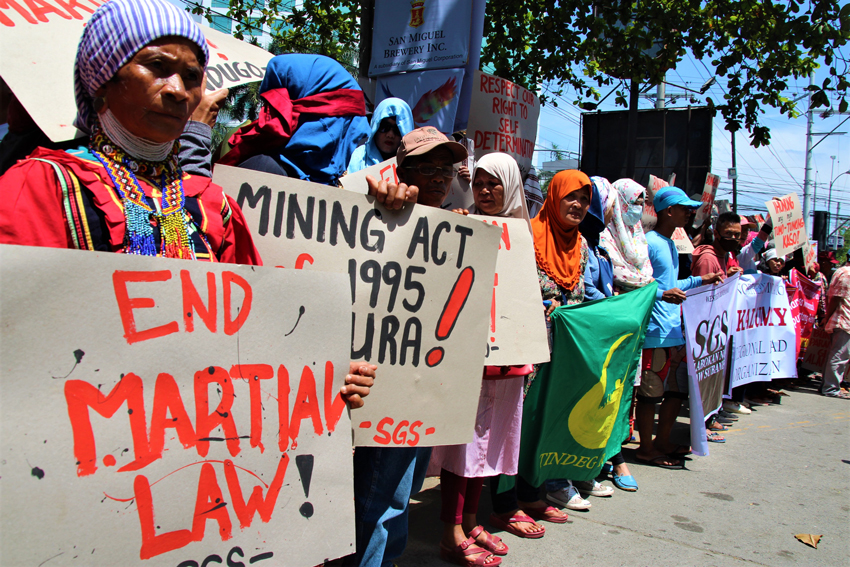 Lumad and Moro from different parts of Mindanao under Kalumaran call to end martial law in a rally in Davao City Thursday in observance of the International Day of the World’s Indigenous Peoples Day on August 9. (Kath M. Cortez/davaotoday.com)

DAVAO CITY, Philippines – In time for the celebration of Indigenous Peoples Month, different indigenous people’s organizations lambasted the worsening violations of human rights as martial law continued to be implemented in Mindanao.

As state forces continue to use martial law to combat ‘terrorism’ in Mindanao, Kalumaran leader Dulphing Ogan said, “it is also a signal declaration of All-out war vis-a-vis counterinsurgency” against the revolutionary forces but targeting communities of indigenous people. He added that majority of its member organizations have been subject to different forms of attacks “especially those who are struggling to defend their ancestral domain and the environment”.

In this formation, Ogan said, “it is clearly imposing military rule” as people cry and struggle “over the facilitation of economic interests” such as land grabbing, mining, logging and massive conversion of the ancestral domain for big plantations.

The Kalumaran report cited a total of 37 killed under the Duterte administration. One of the most recent killings is the massacre of eight members of T’boli and Dulangan Manobo in December, which the 27th Infantry Battalion reported as an ‘legitimate encounter’ against the NPA.

Datu Samuel Dalimbang of Kahugpungan sa mga Lumad sa Halayong Habagatang Mindanao (KALUHAMIN) said the eight T’boli and Dulungan victims headed by Datu Victor Danyan were strongly opposing the coffee plantation in their ancestral land of the David M. Consunji company. Datu Victor opposed the renewal of the company’s coffee plantation operation in 1,600 hectares of their ancestral land and insisted that they should use it for farming. He then ordered that the coffee trees be cut in order for them to occupy the land thus, earning the ire of the Consunjis.

“We believe that the killing happened because Datu Victor and the whole community is against the company,” said Datu Samuel.

The group also recorded 31 cases out of 58 cases of frustrated killings. Ogan said that these numbers are significantly high under a year of martial law in Mindanao.

In Northern Mindanao alone, the leader of Kalumbay Regional Lumad Organization Datu Jomorito Guaynon said that the Higaonon tribe went through several waves of evacuations due to militarization in their community. Guaynon said the military has been conducting house-to-house census “as part of psy-war operations against lumad who are members of their organization to warn them not to join the protest and organizational meetings.

“They are also forcing our members to surrender,” said Guaynon.

Guaynon also added that currently, 40 Higaonon families have put up an evacuation camp at the capitol grounds after troopers of the 58th Infantry Battalion of the Army occupied their community at Sitio Kamansi, Barangay Banglay in Lagonglong, Misamis Oriental.

“We believe that the intensified military operations were aimed at driving the Lumad away from their ancestral land, which covers parts of Mt. Balatukan, to facilitate the entry of large-scale mining companies and agri-business plantations”, said Guaynon.

Meanwhile, in the region of Caraga, the leader of Kahugpongan sa Lumadnong Organisasyon KASALO) Josephine Pagalan said at least 1,607 Manobos from 11 communities of Barangay Diatagon, Lianga town and three communities from Barangay Buhisan, San Agustin town were forced to evacuate due to the encampment of soldiers from the 75th IBPA in their communities since June 14, 2018.

She added that it is the fourth forced evacuation under the Rodrigo Duterte government resulting from human rights abuses by the military, including sexual harassment of women and teenagers, forced recruitment of Manobo men to the military’s Civilian Auxiliary Geographical Unit, as well as threats, harassments, and intimidation of Lumad school students in Sitio Simowao in Barangay Diatogon.

“This heavy military presence in our ancestral land at the Andap Valley complex is aimed at paving the way for the extraction of coal from our ancestral domain by mining giants Benguet Corp., Great Wall Mining, and Abacus Coal,” said Pagalan.

Ogan said there are also evacuations of Lumad in South Cotabato, Zamboanga Peninsula, and Davao Region. These evacuations were mostly due to aerial bombings, encounters, and threats to life.

Kalumaran recorded 534 incidents of attacks on Lumad alternative schools, 384 of these happened under Martial Law.

Jong Monzon of Pasaka Lumad Confederation said that most cases of attack on schools in the Davao region involve red-tagging, threats and harassments of teachers, the encampment of soldiers and vilification of Parent-Teachers Community Association (PTCA)members.

“Our lumad alternative schools are legal and have permits to operate from the Department of Education but it does not spare us from the attacks, “ said Monzon.

The closure of alternative schools in Southern Mindanao, said Monzon, forced around 2,209 Lumad students to drop out from schools. He added that the military is forcing 1,106 students, teachers and parents to be “rebel surrenderees.” 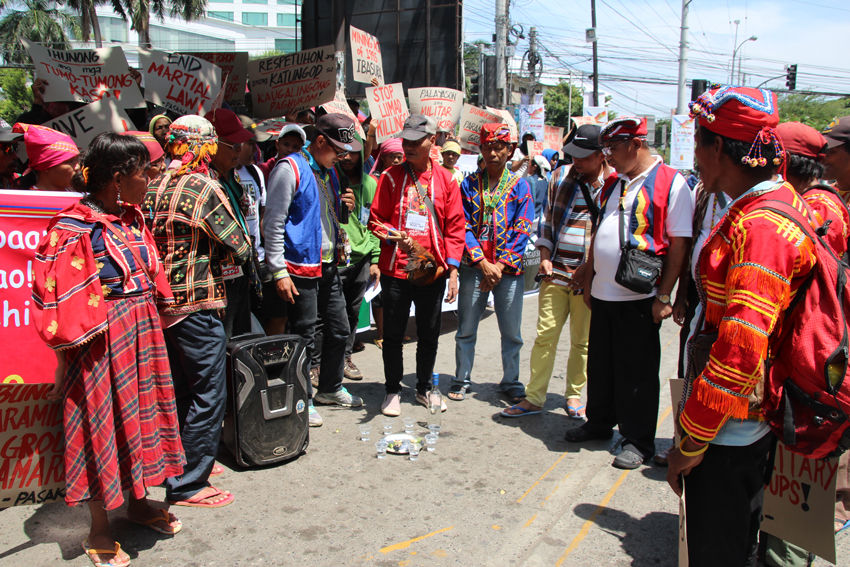 Leaders of various indigenous people groups perform a ritual during Thursday’s rally in observance of the International Day of the World’s Indigenous Peoples Day on August 9. (Kath M. Cortez/davaotoday.com)

Enemy of the state

The group also lambasted the Department of Justice’s ‘terrorist’ list, where 364 out of 657 individuals in the list are from Mindanao.

Of the 364 from Mindanao, 49 are lumad leaders, community members as well as lumad and peasant advocates.

On August 9, 2018, the group led by Kalumaran and Sandugo alliance of minorities staged a protest action in commemoration of the International Day of the World’s Indigenous Peoples.

The group gathered at the city’s Freedom Park to condemn the intensifying attacks on their communities, schools, and leaders, which they attributed to the imposition of Martial Law in Mindanao.

“For the Lumad, the International Day of the World’s Indigenous Peoples is part of our campaign against unbridled plunder, land grabbing, and the destruction of our ancestral lands, as well as the relentless and brutal militarization. Killings, political harassment, and other human rights violations against lumad communities come alongside people’s resistance against development aggression” Ogan said. (davaotoday.com)