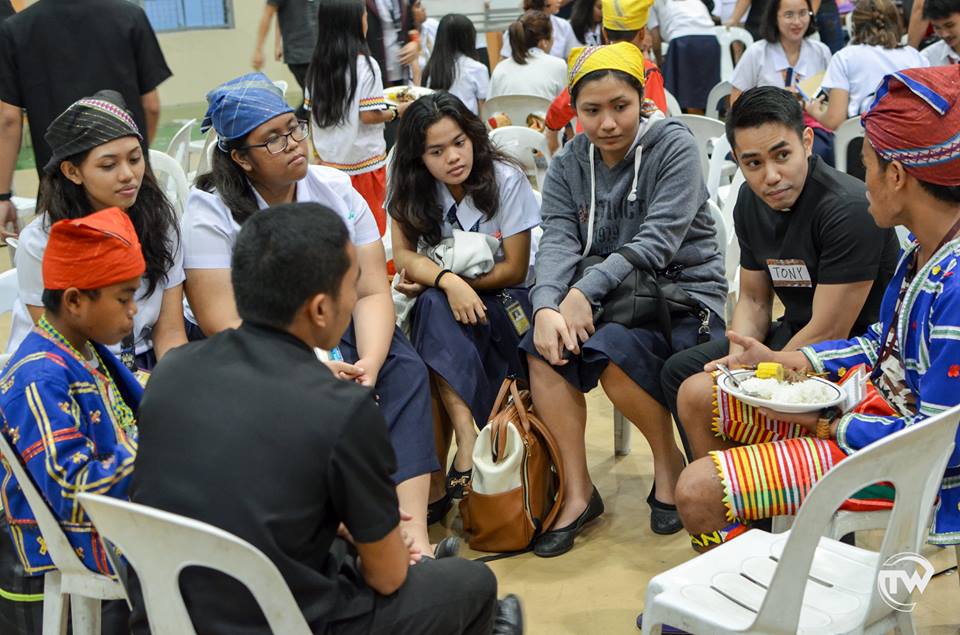 SOLIDARITY. Students and guests integrate with the Lumad at the Central Seminary Gym at the University of Santo Tomas. (Photo by TomasinoWeb)

MANILA, Philippines – Adrian Romero, a full-time professor at the University of Santo Tomas (UST), still found the time to teach part-time at a bakwit school, and was openly critical with how State forces are treating Lumads in Mindanao.

Sir Adrian, as he was fondly called by the Lumad school children, majored in social sciences back in college. He has been teaching community development for the past eight years at the same university where he studied.

He said he responded to the call for volunteer teachers at the bakwit school to teach senior high School. Teachers were lacking, so he enthusiastically gave some of his time and had taught once every week with the bakwit children of the Indigenous Peoples.

He related that his energetic involvement with the Lumad started when he became “exposed” to the situation of the Save Our Schools in 2012. But it was only in 2015 when he got invited and participated to immerse and do some integration that he actually saw the real situation of the evacuees.

This was also when UST became a partner of SOS in 2015 in serving the Lumad. 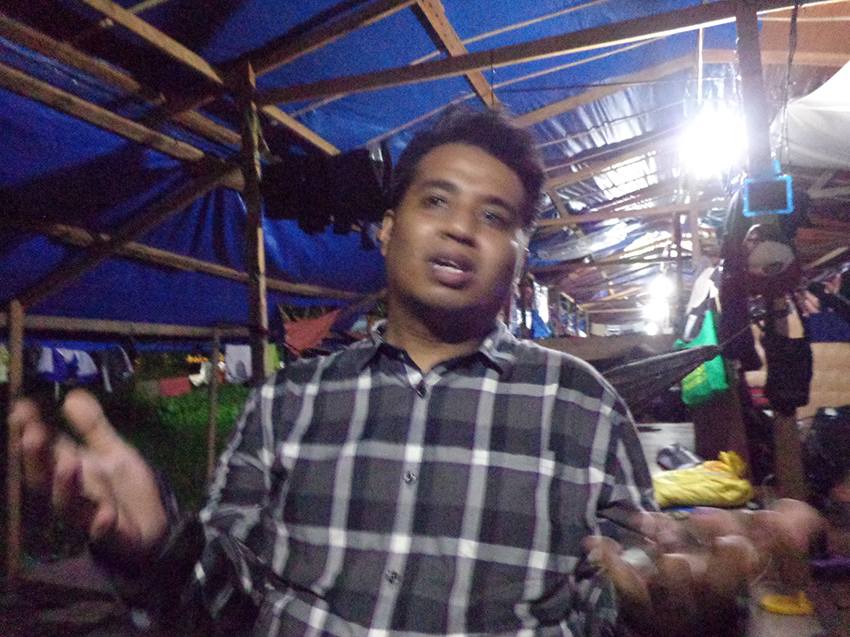 SIR ADRIAN. Adrian Romero is a full-time faculty member at the University of Santo Tomas. (Photo by Fides Avellanosa)

Romero further enthused that he was so happy when he started on a one-day exposure with the Lumad, but it was at the Baclaran Church where the children were encamped in 2015 that he had decided it was not enough for him to be visiting them at the camp.

He wanted to see them in their place. Romero’s intense desire to be with the Lumad children brought him to the Community Technical College of Southern Mindanao (CTCSM) located in Maco, Compostela Valley for one month in July 2016 and another month in July 2017.

It was there that he taught mathematics and he laughed at himself because he said he is a social science major but because there was a need for a math teacher, he took the challenge.

“I taught math in high school, but math is feared because you know numbers, but because they have a curriculum that is “Makabayan, Makamasa, Siyentipikong curriculum,” (pro-people, nationalist and scientific curriculum,) I used that tool to make it easy to teach math because they are in a concrete condition.

He explained that when the lesson was about integers where there is a positive side and negative side, instead of just illustrating the negative one, or lack of one, he would try to give concrete examples that are real and existing to the students, something that they can see where there is a lack of one or numbers.

“So they won’t go crazy,” he added, laughing.

Still a very young professor for his age, Sir Adrian continued to tell his story that though he is enjoying as a mentor of the Lumad children.

It’s their difficult situation that really opened his consciousness and made him ask why when their lives were good and they were farming and their agricultural subject was helping them, but why the militarization?

“What really pisses me is that what I saw was their life was peaceful when I went to visit once, and then, whenever the word ‘military’ is mentioned, they seemed afraid. I was wondering why… but based on the mandate of the Constitution, the military are supposed to protect them,” he asked, perplexed.

A deeper research pointed to a “bigger interest” behind the use of the military force, he mused.

Then when he shared what he learned about the Lumads to his co-teachers at UST, his students and to other people, and even invited them to integrate with them, he was surprised with the positive response from them.

His colleagues have thought of a project to help the Lumad through a fun run that raised funds enough for them to build a classroom for the Lumads in Zamboanga in 2015.

In the following year, Romero further related that in August up to September 2016, UST accommodated the Lakbayanis inside the UST campus, and here, the whole institution was given the chance to integrate and talk to the Lumad, as well as join the call of the Save Our Schools Network to stop the militarization.

They also aligned with the SOS’ advocacy to stop the interventionism of big foreign corporations, promote the right to education and put a stop to martial law in Mindanao.

Romero explained that where before he understood the reason behind the declaration of martial law and that was the threat of the ‘Maute’ as justification to it.

But then after he heard the Lumad’s narrative, he began to realize that martial law was even making life worse for them. He could not quite understand why the teachers of the Lumad schools are being harassed, imprisoned and even killed. 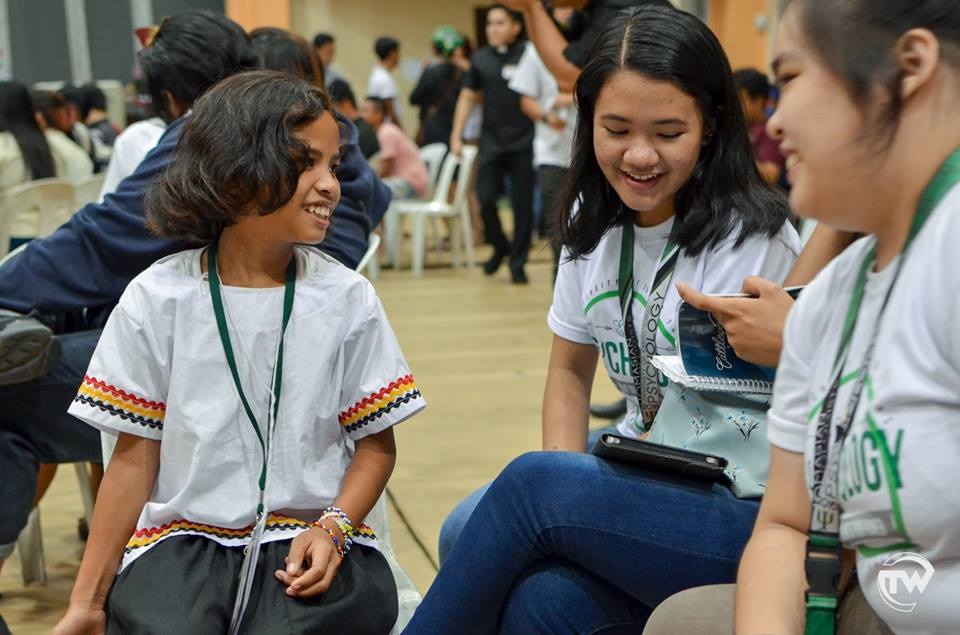 SHARING. A Lumad student shares some laughter with University of Santo Tomas students. (Photo by TomasinoWeb)

As a volunteer at the bakwit school of the Lumad at the university student farm where the Lumads have encamped for several months, he was teaching Disaster Risk Reduction Management (DRRM) to senior high school students, which he said is his field.

He shared that it pleases him during their discussions once a week, on how calamities affect the youth, especially the man-made disaster brought about by militarization which is very detrimental to the children.

Militarization, he said, brings threats not only to the teachers who are becoming afraid for their safety as they become targets of harassments. It also brings anxiety to the children whose teachers are fearful of being harmed as they are being suspected as rebels, but then, he saw nothing wrong with teaching.

Still, this fact has not discouraged his desire to teach full-time at the Lumad school.

“I don’t want to make Mindanao as only a place to spend vacation, but my perspective is to teach full-time in a Lumad school because I am seeing the potential of being actually there with the children, and I want to work for it,” he said.

Romero he grew up in Olongapo Zambales, a US Naval base where both his parents used to work. But when the military bases got closed, and both his parents moved to the States, he was left behind and continued his studies at UST, where he pursued social sciences.

“Teaching is the expression of my struggle,” he explained.

He does not want to call his contribution as simply an “outreach” to the “Lakbayanis” where he saw how 2000 “Lakbayanis” came together, united in asserting their rights. He believes that people in Manila are learning from the Lumad experience.

Romero expressed his admiration to the ‘Lakbayanis” whom he described as having nothing at all in terms of material possession, and yet, they drew their strength from each other and pursued their calls and their advocacies.

“But I am more amazed with the SOS ‘Bakwit’ school, where the ideal concept of an education that is mass-oriented, Nationalist and Scientific education is being pursued – mass-oriented because only a few are able to finish college, only a few are educated to serve the country; and Scientific because it is promoting a liberating thought, of an ethical view of what society is,” he said. (davaotoday.com)