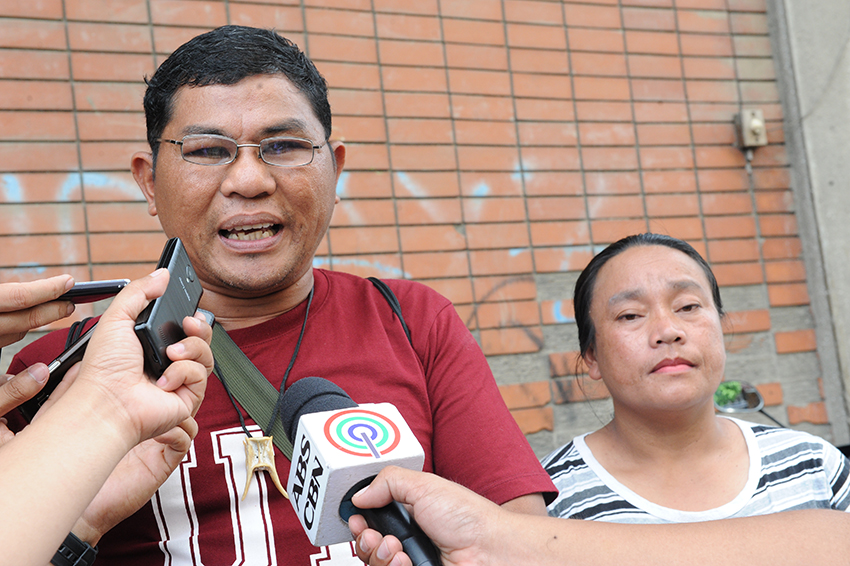 Datu Jomorito Goaynon (left), chairman of the Kalumbay Regional Lumad Organization, says the human rights violations committed by state agents have continued even under President Rodrigo Duterte. At left is Amelia Omandam, whose husband Alfredo Omandam were among those arrested by authorities in Barangay New Eden in Pangantucan, Bukidnon recently. She said Alfredo’s arrest was illegal. (Jigger J. Jerusalem/davaotoday.com)

CAGAYAN DE ORO CITY – Northern Mindanao’s indigenous peoples (IPs) are still optimistic President Rodrigo Duterte will act on their complaints of alleged abuses perpetrated by state agents against them as they submitted a report on these violations to the Commission on Human Rights (CHR-10) in the region.

Although their support for Duterte has eroded in the last few months due to what they called as “empty promises,” the “lumad” (native) people of the region believe the President can help the plight of the IPs by ordering the military and police authorities to release individuals who were wrongfully accused and imprisoned for trumped-up charges.

One of the latest of those victimized by security forces is Alfredo Omandam, a member of the Civilian Volunteer Organization in Barangay New Eden, Pangantucan, Bukidnon.

According to Datu Jomorito Goaynon, regional chairman of the group Kalumbay Lumad Organization, Omandam was accused by the police as a commander of the New People’s Army (NPA).

Omandam was with his wife Amelia, the barangay secretary of New Eden, when members of the Bukidnon Provincial Public Safety Company forcibly entered their home and took them to an army camp in Maramag, Bukidnon.

The couple was then turned over to the office Criminal Investigation and Detection Group (CIDG) and forced Alfredo to admit that he owned bomb-making items and explosives.

Amelia has denied all the accusations against them and said these were planted.

The Omandams are just a few of the indegenes being accused of crimes and were made to confess wrongdoings by authorities, Goaynon said.

This practice of accusing members of the lumad communities has not stopped even after Duterte assumed the presidency last year despite his sympathy for the IPs in Mindanao, Goaynon.

“There is not much difference between Duterte and [former president Benigno Simeon] Aquino. They both ignore the plight of the lumad,” he said in a phone interview on Sunday, July 6.

In fact, he added, the situation of the IPs has worsened during the administration of Duterte, especially now that the whole Mindanao is under martial law.

“For us, we didn’t feel that Duterte has cared for us lumad as abuses such as land grabbing and intrusion of ancestral domain, militarization, forced evacuation have not stopped. They have even intensified their arrest of innocent lumad civilians,” he added.

The military, for its part, has denied any violations committed by its personnel and had asked victims of abuses to file appropriate charges against erring soldiers.

To formalize their sentiments, Kalumbay submitted several complaints to the Commission on Human Rights-10 (CHR-10) office here on Friday, August 4.

“We demand the CHR to help us by investigating these cases we brought before them and we hope our grievances will reach Duterte so he can act on them,” Goaynon said.

Datu Jomorito Goaynon (left), chairman of the Kalumbay Regional Lumad Organization, said the human rights violations committed by state agents have continued even under President Rodrigo Duterte. At left is Amelia Omandam, whose husband Alfredo Omandam were among those arrested by authorities in Barangay New Eden in Pangantucan, Bukidnon recently. She said Alfredo’s arrest was illegal. (Jigger J. Jerusalem)