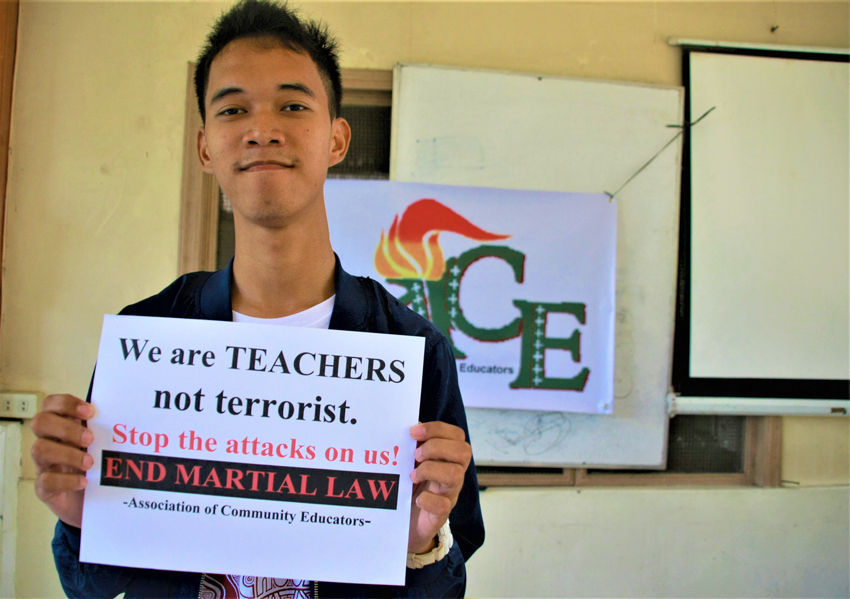 Karl Tristan Butalid, University of the Philippines Mindanao alumnus, is currently teaching Grade 7 to 10 students in one of the Salugpongan schools in Compostela Valley province. (Kath M. Cortez/davaotoday.com)

On the day of his birthday, the young Karl Tristan and his family received the news that his father, while driving a motorcycle, was shot several times by a lone gunman with a calibre 45 pistol on December 11, 2013.

“It was the saddest birthday in my entire life. It should be a celebration but it became a painful date to remember” said Karl Tristan.

His father, Rogelio “Tata” Butalid is a broadcast commentator for Radyo Natin Tagum and has been raising issues regarding the row between two groups contesting control of the Davao del Norte Electric Cooperative (Daneco).

He was a host of “Ang Kamatuoran”, an hour-long program paid for by the DANECO with bitter dispute against its rival faction Cooperative Development Authority (CDA). He has been in the broadcast industry since his college days, working for DXDN and also a Barangay Kagawad of Barangay Mankilam.

On the following year, the 11th Regional Trial Court Branch 1 issued the warrant for his immediate arrest of a certain Renster Azarcon who is the identified gunman and with alleged links to several influential individuals in the region.

“My father was a good man and a good provider to our family. He is my idol, a strong man”, told Karl Tristan in a conversation with Davao Today.

To date, the gunman and the mastermind of the killing are still free.

He finished his Bachelor of Arts in Anthropology from the University of the Philippines-Mindanao, now teaching Grade 7 to 10 in one of the Salugpongan schools in Compostela Valley province.

His school where he volunteered as a fulltime teacher is recently “under attacked” and was forced to close.

Teacher Karl’s co-teachers were accused of kidnapping and child trafficking after they left the school because of the “harassment of Alamara and 56th IB soldiers who were forcing the closure of the Salugpongan Ta’Tanu Igkanogon Community Learning Center Inc. (STTICLCI)”.

Teacher Karl does not have an indigenous blood and his family has been asking him to stop volunteering for the Lumad School because they worry for his safety. They are worried that Teacher Karl can also be a target of threat and communist tagging just like what happen to his other co-teachers who face raps and were tagged as members of the New People’s Army.

His family was traumatized by the death of his father and feared that the same fate will happen as he was also vocal with the schools situation in the mountains of Talaingod.

He became one of the few teachers who appeated in a media conferences to report the cases of threat in their campuses and the community to gain support from the public and help them pressure different agencies.

“I have witnessed the worse case of injustice to my family and to the community where I have devoted my life as a teacher. Both of them suffered such neglect from the government who became blind and deaf of peoples cry, I cannot stop and do nothing” said Teacher Karl.

For teacher Karl, fighting for social justice is a long road to take. It needs determination and courage to protect the rights of the people he devoted his life. He is certain that “social justice can only be achieving with a collective act”. (davaotoday.com)